Obama's Paris Blunder: Part of a Much Bigger Problem 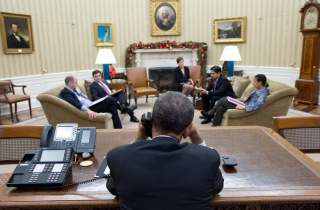 One hesitates to pile on to the criticism coming from the usual suspects about the Obama administration's decision not to send a high-level representative to march in Paris to express solidarity in the wake of the outrageous attack on the Charlie Hebdo offices, but the White House itself now admits that it was a mistake not to send a senior official and even claims that "the president himself would have liked to have had the opportunity to be there" under different circumstances.

It's not just the Fox News crowd that found the juxtaposition odd. Retired Admiral Jim Stavridis, former Supreme Allied Commander and current dean of the Fletcher School of Law and Diplomacy at Tufts, tweeted, "I wish our US President had gone to Paris to stand with our European allies. He Suis Charlie indeed." Aaron David Miller, a twenty-four-year veteran of the State Department and current scholar at the Wilson Center, dubbed the decision "a poster child for tone deafness."

That's nothing new for Obama foreign policy. From his change of course on Eastern European missile defense to the "pivot" to Asia to the decision to largely stay out of the Syrian civil war, this president has combined sound strategic instincts with phenomenally bad messaging and rollouts. As Jonathan Chait notes in an entirely different context, this is ironic, since Obama emerged on the public scene and swept to the presidency largely on the strength of his skills as an “inspirational speechmaker.” Perhaps this is because, as Joshua Green opined, "Obama’s presidency is largely about adhering to intellectual rigor—regardless of the public’s emotional needs" and the president "disdains the performative aspects of his job." Or, perhaps, as Chait argues, "he is conducting his presidency on the assumption that his place in historical memory will be defined by a tabulation of his successes minus his failures" and believes "that tomorrow’s historians will be more rational and forgiving than today’s political commentators." Or maybe he's just not as good at messaging as we thought.

Magnifying the failure to send a high-level representative to such a high-profile event was the reason given: the onerous demands of presidential security. White House press secretary Josh Earnest explained that, "We’re talking about a march that came together in about thirty-six hours, and a march that took place outdoors." Secret Service spokeswoman Nicole Mainor added, “It would have been a challenging advance to have a Secret Service protectee attend the Paris rally based on what we know. Our logistic and security requirements had the potential to affect the planning and/or event.”

What message does it send that millions of French citizens and heads of state and government from around the world are willing to gather to show unity in the face of terrorists trying to stifle free expression, but the leader of the free world can't go, because hey, it's outside and there's only thirty-six-hours notice?

This was, after all, a rally held in one of the most developed countries with some of the most sophisticated security forces on the planet. And, ironically, the leaders were apparently cordoned off from the public, anyway.

John Kennedy was assassinated before I was born, but there have been serious attempts on Gerald Ford and Ronald Reagan in my memory. Obviously, a presidential assassination is a national trauma and we rightly take great pains to protect our leaders. But making a fetish of security hampers their ability to lead.