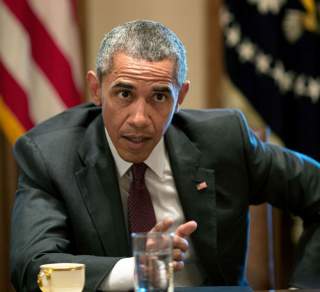 When looking for support for his foreign policy, President Barack Obama wants Republicans to line up behind him because politics should stop at the water’s edge. But when trying to elect a Democratic successor, Mr. Obama takes politics with him wherever he goes, including to this week’s G-7 Summit in Japan. Speaking at a press conference, he pontificated on the ongoing primary elections, including sharp jabs at Republican frontrunner Donald Trump. While he might think that his attacks on Trump’s “ignorance” and “cavalier attitude” will somehow help former Secretary of State Hillary Clinton, they in fact diminish not only Mr. Obama and his office, but the country he has traveled overseas to represent.

Mr. Obama’s conduct is especially striking when contrasted with that of former President George W. Bush, who generally declined to become involved in the 2008 election campaign—despite the fact that then-Senator Obama was regularly assailing his leadership. President Bush even had his own opportunity to criticize candidate Obama from the podium at a G-8 Summit in Japan, but refused to do so despite a journalist’s question that provided just such an opportunity. Indeed, when Senator Obama lashed out at Mr. Bush after interpreting some of his comments during a speech in Israel as criticism, a White House aide explicitly stated that Mr. Bush’s remarks were not directed at Obama. In fact, if President Bush had wanted to do what Mr. Obama just did in Japan, it would have been very easy. Mr. Bush could have expressed concerns to G-8 leaders about Obama’s ties to Jeremiah Wright and Saul Alinsky, emphasizing his radical left-wing views, and then run to the cameras with the reactions he provoked. Likewise, it would not have been difficult for President Bush to quote Israeli reactions to some of Mr. Obama’s statements during his trip to Israel. He didn’t.

President Obama’s effort to exploit an international summit for political purposes is dangerous for several reasons. First, whatever he may think of Mr. Trump, politics actually should stop at the water’s edge—otherwise, it will be virtually impossible for the United States to build an effective and sustainable foreign policy without bipartisan support. Even if President Obama has decided to coast through his remaining months in office without attempting to achieve anything important, attacking the likely Republican nominee on an international trip is reckless and disturbing.

Beyond this, however, if Mr. Obama succeeds in establishing his new standard for presidential behavior during election campaigns, he will profoundly undermine both America’s image and his future successors. A raucous year-plus process to fill a four-year job is bad enough inside our borders—does Mr. Obama really want to extend it until it covers the globe? How does he think that new presidents will be able do their jobs after months of nasty attacks from their predecessors? And is this really the way to build a shining city on a hill to inspire a global wave of democratization?

The President’s behavior creates other problems too. Whether or not Mr. Obama is accurately conveying what he has heard when he says that Mr. Trump’s comments have “rattled” foreign leaders, he is using those leaders—in this case, our closest allies—as instruments in a political campaign in a wholly inappropriate effort to imply that they endorse Secretary Clinton. This is damaging not only in importing foreign political preferences into U.S. elections (something that many Americans won’t welcome, especially when Donald Trump has suggested that some of the same allies are not paying their fair share for their own defense) but also in complicating U.S. efforts to work with those very leaders if Mr. Trump is actually elected.

Finally, there is a deeper and more fundamental problem. Whatever the shortcomings in Mr. Trump’s foreign-policy positions, which do not yet seem fully formed and are not always precisely expressed, he is the presumptive Republican nominee. In fact, media reports now state that he has secured sufficient delegates to win the nomination at the Republican National Convention. What that means is that Donald Trump is the legitimately selected representative of the Republican Party to compete for the post of President of the United States, notwithstanding President Obama’s preferences or, for that matter, those of House Speaker Paul Ryan, the president’s former Republican rival Mitt Romney, or much of the Republican establishment. Mr. Obama’s statements would have been unwise when Mr. Trump was one of several Republican candidates, but are far worse when directed at the presumed nominee, in that they attack Mr. Trump’s legitimacy and the voices of the millions of voters who supported him. Either the will of the people is supreme or it isn’t, and if Donald Trump has won the support needed to prevail in the Republican nominating process, he deserves at least the public appearance of respect from the president while Mr. Obama is traveling abroad.

At home, Mr. Obama is freer to express his views, though even then he would do well to exercise care in view of how polarizing he has been himself. After all, the divisiveness of the 2016 election campaign did not spontaneously emerge as a consequence of Donald Trump’s rhetoric. It has been growing for at least two decades. As candidate Obama revealingly observed of “small towns in Pennsylvania” and the Midwest in 2008, “it’s not surprising then they get bitter, they cling to guns or religion or antipathy to people who aren’t like them or anti-immigrant sentiment or anti-trade sentiment as a way to explain their frustrations.” Eight years of this ignorance and cavalier attitude toward one’s own citizens have produced predictable results that could have been avoided had Mr. Obama sought to understand and respect all of the people he was elected to represent rather than focusing strictly on those who share his perspectives and aims. Hasn’t he done enough damage?