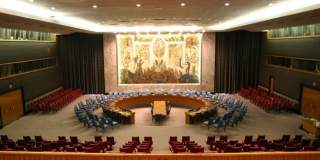 The recent open letter by 47 Republican Senators, putting Iran on notice that the US Constitution fundamentally limits the President’s ability unilaterally to conclude a durable nuclear weapons agreement, has prompted strident criticisms from both the American and Iranian officials, giving some tantalizing hints on how a “nuclear deal” with Iran will be achieved. Despite some carefully-phrased statements to the contrary, it appears that the administration plans to evade the Constitution’s clear requirement that the Senate approve all treaties by having the UN Security Council adopt a resolution implementing the deal.

Indeed, Iranians seem to have been aware of this cynical game plan for quite some time, as evidenced by strong rejoinders in the Iranian state-controlled press, which mocked the Senate letter. Meanwhile, Iranian Foreign Minister Javad Zarif stated that any nuclear weapons deal "will not be a bilateral agreement between Iran and the U.S., but rather one that will be concluded with the participation of five other countries, including all permanent members of the Security Council and will also be endorsed by a Security Council resolution." And European diplomats and UN officials also have been aware for quite some time about the administration's Security Council gambit. Only Congress and the American people have been in the dark.

This deception aside, the Security Council-centric approach, while solving some of the Administration’s political problems, would impose very significant long-term costs on the United States, and would not ultimately achieve a binding deal that cannot be altered.

The Constitution’s framers purposely divided the treaty-making power between the president and Senate, requiring that the Senate consent to any treaty by a two-thirds supermajority, both to limit presidential power and to ensure that all such international undertakings by the United States enjoyed broad domestic support. This bedrock requirement cannot be avoided by claiming that an agreement ordering critical aspects of our relationship with another country is somehow not a “treaty,” or by reference to another treaty like the UN Charter.

Ratification of the Charter committed the United States, like other UN members, to comply with certain Security Council resolutions and those resolutions may impose binding international obligations on the United States. Specifically, Chapter VII of the Charter indicates that the “Security Council shall determine the existence of any threat to the peace. . .and shall. . . decide what measures should be taken in accordance with Articles 41 and 42, to maintain or restore international peace and security.” By invoking Chapter VII, the administration intends to bypass the Senate and Congress as a whole.

The Charter, of course, does not and cannot reorder the Constitution’s division of power between Congress and the president. As the Supreme Court noted in a recent case, involving U.S. obligations to implement International Court of Justice decisions under the Charter, where it found that ICJ decisions were not automatically binding as a matter of domestic law “[t]he President may comply with the treaty’s obligations by some other means, so long as they are consistent with the Constitution.” Medellin v. Texas (2008)

Nevertheless, having the Security Council drive an Iranian agreement will have several deleterious legal and policy consequences. First, while the Iranian nuclear deal would not be binding on the United States as a “signatory” to the agreement, rendering Secretary Kerry’s statement to this effect technically correct but utterly misleading, it would bind the United States as a UN member.

Second, as is common with Chapter VII resolutions, the Iranian nuclear weapons resolution would keep the Council seized of the matter. This means that the resolution could be revised only by future Security Council action, which the United States cannot guarantee. For example, the United States and its allies would be unable to extend the proposed 10-year sunset provision, even if that became necessary based on Iranian conduct, since Iran would surely oppose the measure with the backing of Russia and China, who can veto any change.

This point is worth emphasizing, since the administration's main oft-articulated reason for choosing the 10-year time frame for the nuclear deal is its belief that over this time period Iran's regime would lose its revolutionary character and become a responsible regional power. This optimistic assumption has been strongly challenged by Israel, Saudi Arabia and other Sunni Arab states, who point out that Tehran hasn't mellowed over the last several decades. The response by administration's supporters has been that the United States will be able to react in the future to evolving Iranian behavior, whether positive or negative; this claim rings hollow, given the Chapter VII resolution that would enshrine the nuclear weapons deal.

And even if Iran's own behavior is impeccable, other developments may well arise that would require changes in the agreement. For example, Saudi Arabia has indicated that it will endeavor to acquire nuclear infrastructure matching Tehran's, thus precipitating a nuclear arms race in the Middle East and beyond. And the administration's erstwhile priority has been to deny uranium enrichment capability to Sunni Arab states.

So, to salvage this goal, it might wish to try changing the Iran nuclear deal, and yet, having chosen the Security Council venue, it would unable to so. This is highly ironic, since the administration's main justification for eschewing the treaty route is to preserve the President’s flexibility to change the deal on a moment's notice, if circumstances demanding the change arise.

Third, it would be up to the Security Council to determine whether or not Iran is complying, and whether any particular violation is material. Even if the United States believes that Iran is in clear violation of its obligations, it could not suspend compliance with its own obligations unless the Security Council agreed. If it threatened to use force without Security Council approval – which remains possible as a self-defense measure under the Charter – the U.S. would certainly be branded an international lawbreaker at a tremendous diplomatic cost.

Indeed, the broader consequence of this whole approach would be to make the Security Council Iran's powerful international protector, buttressing its ambitions as a regional hegemon and inducing Sunni Arab states to propitiate Tehran. While the Security Council has not always been responsive to US wishes---given the veto power wielded by other permanent members---Washington has at least been able to render it ineffective by exercising it own veto. The transformation of the Security Council into Iran's ally would represent one of the most disastrous failures of American statecraft, the point that the administration seems to have overlooked.

Fourth, the international law consequences aside, the administration may well argue that a Security Council resolution binding on all UN member states, coupled with certain existing delegations of authority from Congress to the president, has a comparable domestic legal effect, giving the President authority to suspend or even cancel the statutory sanction regime now in place against Iran. Although this argument is legally flawed, it might give the administration some political cover to lift sanctions against Iran.

The administration is also likely to claim that, having dismantled U.S. statutory sanctions, it will retain leverage against Iran thru the so-called "snap back scheme," whereby the Security Council, having vitiated some Iran sanctions entirely, will suspend the rest of them on a rolling basis. This would require the Security Council to renew the suspension every 180 days, theoretically enabling the United States to block this by exercising it veto power.

This argument, however, fails to carry the day; since the Security Council would be seized of the compliance issues, it would be exceedingly difficult for the United States to claim that Iran has violated the agreement and unilaterally block the renewed sanction suspension. Moreover, once the sanctions have been relaxed for a protracted period of time and enough Western companies have invested in Iran, re-imposing them would be ever more difficult. And, once the Iranian economy has recovered, it will become resilient to the resumption of sanctions, even if they could be re-imposed.

Overall, it is understandable why by-passing Congress and going directly to the Security Council has appeal to the president and his advisors, who are desperately looking for something that can be portrayed as foreign policy achievement and appreciate the depth and breadth of congressional opposition to any agreement permitting Iran to retain its nuclear infrastructure. But this tactic would also create tremendous diplomatic and national-security costs for the United States in the future, giving Iran the “high ground” as a victim of American lawlessness in future confrontations over its nuclear ambitions.

It would also set a dangerous precedent for future presidents, who may also be determined to achieve their foreign policy ends regardless of Congress and the Constitution’s requirements for treaty-making. This would lead to the aggrandizement of presidential power at the expense of Congress and warping of the separation-of-powers architecture, which is the primary means of protecting individual liberty in our constitutional system.

Moreover, if the purpose of using the Security Council is truly to tie the hands of a future president and Congress who may view the Iranian regime and its geo-political ambitions differently, it will not work. However binding Security Council resolutions may be on the international level, they are not “treaties” and the UN Charter – which is – is not self-executing. Thus, although the U.S. might be in violation of its international obligations, as a matter of domestic law, the president must still obtain congressional assent before he can lawfully lift statutory sanctions against Iran.