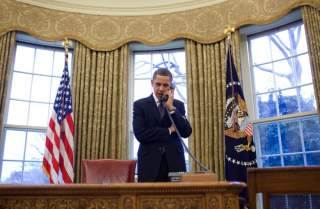 Former secretary of state Hillary Clinton’s statements on the inadequacy of a foreign-policy strategy of not doing “stupid stuff” are way off the mark. Although there have been many foreign-policy blunders in U.S. history, avoiding making a crisis worse is vital and underappreciated by the pundits. My experiences in the military and in government have given me a deep appreciation for presidents who avoided doing “stupid stuff” and responded to challenges in a cool, detached manner.

President Eisenhower, to quote Joseph Nye, was a “master of leading from behind.” He was not swayed by hawkish demands to bail out the French at Dien Bien Phu, and rejected British, French and Israeli requests for military assistance as they sought to recapture the Suez Canal. He championed restraint while the Soviet Union crushed rebellions in Poland and Hungary, and refused to give in to the demands of the military-industrial complex to massively increase defense spending to compensate for the fictitious “missile gap.”

In my early days in the military, I applauded President Kennedy for resisting calls to invade Cuba during the Missile Crisis and to send combat troops to Vietnam. Adherence to the strategic logic of containment led President Johnson to use the fabricated events in the Gulf of Tonkin to attack Vietnam, eventually sending in large amounts of brave Americans troops. For his part, President Nixon eventually recognized the limitations of “containment,” withdrew U.S. forces from Vietnam, and sought rapprochement with “Red China.”

While working under President Reagan, I observed key instances of his foreign-policy restraint. He rejected Secretary of State Alexander Haig’s recommendations to send 25,000 troops into Central America to prevent the Soviet Union from gaining another foothold in our hemisphere. Reagan negotiated with Gorbachev, despite the objections of then deputy CIA director Robert Gates, who viewed Gorbachev’s Stalinist leanings as a nonstarter. Perhaps his most outstanding exercise of restraint came in the aftermath of the Beirut barracks bombings that killed 240 U.S. Marines. President Reagan recognized that retaliation and a surge of U.S. troops in Lebanon would be pointless and avoided squandering more American blood and treasure. George H.W. Bush sought United Nations and Congressional approval before repelling Saddam’s invasion of Kuwait and stopped at the Iraqi border, rather than marching onward to Baghdad and overthrowing Saddam. President H.W. Bush recognized the benefits of tackling crises as they came, and as Jon Meacham described, often “spoke, usually privately, of how foreign policy was about ‘working the problem,’ not finding grand, all-encompassing solutions to intrinsically messy questions.”

Unfortunately, this restraint was not echoed by his son, who outdid previous administrations in doing “stupid stuff.” The blunders began as soon as the invasion of Iraq was justified using false pretenses. The removal of Saddam Hussein and subsequent half-hearted stabilization operation resulted in a fragile state that continues to be plagued by chronic violence. In Afghanistan, Bush’s absence of a plan and the invasion of Iraq diverted resources and attention away from the quagmire before the mission was accomplished. Bush was also responsible for placing Hamid Karzai, whose notorious intransigence continues to frustrate U.S. strategic efforts in the region, in power. Lastly, he cost the United States valuable intelligence, strategic cooperation and a diplomatic opening when he declared Iran a member of the “axis of evil,” even though that country had just helped the United States oust the Taliban from power.

Amateur strategists criticizing President Obama’s foreign policy fail to recognize how strategic restraint advances our interests without compromising the “long-game” to dislodge global terrorist groups like ISIS. Leslie Gelb, former assistant secretary of state under President Carter, once told me, “without a strategy or vision, people will die, but with one, many more people will die.” In looking at each situation and making a cost-benefit analysis before taking action, President Obama has avoided making costly mistakes and doing the stupid stuff his predecessor committed.

For example, in 2011, when deciding whether to arm the so-called moderates in Syria, Obama had to consider how effective the group would be as a fighting force and whether the arms we gave them would fall into enemy hands. Based on these concerns, he correctly decided that it would have been reckless to provide them with sophisticated weapons like the ones we gave to the Iraqi military. As President Obama recently told Thomas Friedman, the notion that arming the rebels would have made a difference has “always been a fantasy.” The president continued:

“This idea that we could provide some light arms or even more sophisticated arms to what was essentially an opposition made up of former doctors, farmers, pharmacists and so forth, and that they were going to be able to battle not only a well-armed state but also a well-armed state backed by Russia, backed by Iran, a battle-hardened Hezbollah, that was never in the cards.”

Can you imagine how militarily effective ISIS would be if they had gotten sophisticated weapons, including MANPADS, a couple of years ago?

It is ironic that many of those who advocate intervention in Syria or deeper involvement in Iraq were stupid enough to support and vote for what Ted Sorensen called the “foolish, pointless, endless invasion and occupation of Iraq.” Obama should pay no more attention to these hawks than Eisenhower did to John Foster Dulles, Paul Nitze and Joseph McCarthy, who argued for a tougher stance against the Soviet Union, or Ronald Reagan did to Robert Gates, whose profound mistrust and misjudgment of Gorbachev would have stifled diplomatic and arms-control efforts. Rather, Obama should continue to follow the advice of the first Bush and work foreign-policy problems methodically, rather than searching for a one-size-fits-all approach to a chaotic world. President Obama has met present-day challenges by keeping his focus on long-term strategic goals: doing smart stuff.

Alvaro Genie, who assisted with this piece, is an intern at the Center.