Obama's Strike on Keystone: One Front in a Bigger Battle 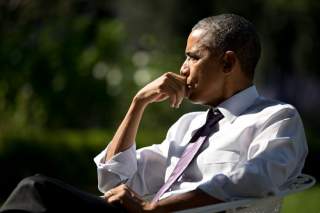 The White House finally removed what little suspense remained in the Keystone XL pipeline debate: Barack Obama will not sign a bill allowing the pipeline's construction.

This isn't exactly a shock. The Obama administration piled delay upon delay in its Keystone decision-making process. When the State Department review concluded last year that the project wouldn't have a significant environmental impact, more study of the matter was deemed necessary.

In interviews, President Obama has repeatedly downplayed the number of jobs Keystone would create. Even fans of Comedy Central's "The Colbert Report" got to hear some of Obama's Keystone skepticism.

When pressed by Congress in the past, the president has denied Keystone's builders the necessary presidential permit. And Obama wouldn't even budge on Keystone to help Louisiana Democratic Sen. Mary Landrieu, who clearly thought getting the pipeline through the Senate would help her win her December runoff. (She lost, handing Republicans another Senate seat.)

But Obama has always at least posed as if there was some level of Solomonic decision-making going on with regard to Keystone. Complete Republican control of Congress has apparently made that posture untenable.

Nevertheless, there are some obvious political risks to Obama's veto threat. First, Keystone is an issue that divides his party. Many moderate and swing state Democrats support the pipeline. So do some labor unions, including the Teamsters. AFL-CIO President Richard Trumka, who no one would mistake for a conservative, wants to the pipeline to go forward.

West Virginia Democratic Sen. Joe Manchin, who has kept a seat in an increasingly purple state blue, is one of the main lawmakers behind the Keystone bill Obama wants to veto. He described the White House's opposition as "the most discouraging thing I've ever heard."

Second, billionaire environmentalist Tom Steyer spent heavily trying to rally voters against the pipeline. He supported Democrats, especially anti-Keystone ones, in key Senate races. Despite assembling $85 million in funding, most of Steyer's candidates—four out of six, to be exact—lost.

That's not to say Keystone was the electoral juggernaut that decided the midterms. Many other issues were in play in all of those races. But it does show that opposition to Keystone isn't a political boon, even when significant environmental money is attached.

Third, the president's dour assessment of Keystone's economic potential is at least debatable. The fact-checking website Politifact, an occasional target of conservatives, rated Obama's Keystone jobs estimate false. (Though to be fair, the site reached the same conclusion about some estimates on the higher end.)

Neither of these majorities is veto-proof, however, so the president is hardly issuing an idle threat. The question is why this is the fight he wants to pick with the new majority in a year that promises to be filled with conflict. Obama won't need another big infusion of green campaign cash, as he is term-limited out of office, and Hillary Clinton is free to take her own stand (someday).

Environmentalists have been portraying Keystone as a climate catastrophe. Bernie Sanders, the independent socialist senator from Vermont who caucuses with the Democrats, complained Keystone would "let a Canadian oil company ship some of the dirtiest oil on the planet across the United States on its way to overseas markets."

Obama clearly agrees that it is at least a net negative for greenhouse gas emissions and the environment. Moreover, he has been eagerly expanding executive power as Congress has slipped away from his party’s control. He is certainly not going to concede any existing authority.

That's why the White House has been sure to zing Congress for "circumventing a well-designed process" for pipeline approval—a process that leaves the decision-making power in the hands of the president, state commissions, basically everyone except congressional Republicans. The formal veto statement, released Wednesday, emphasizes "longstanding Executive branch procedures regarding the authority of the President."

Even when Democrats controlled both houses of Congress, Obama's environmental agenda did not progress as well as he would have liked. Now faced with hostile majorities, he is going to once again go the executive power route.

Keystone is just one front in this battle.