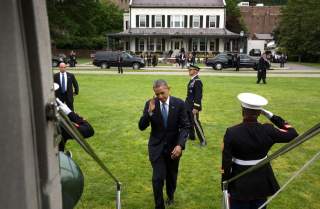 American presidents are usually classified as transactional or transformational, depending on what they accomplish in office.  For example, Bill Clinton was more transactional, that is he handled the day to day challenges of his office, while Ronald Reagan was considered more transformational, that is he changed the terms of the debate in the country.

There is no doubt that Barack Obama aspired to be a transformational president, particularly when it came to foreign policy, given the strategic blunders of the George W. Bush administration.  In fact, that is why I responded enthusiastically when Bill Clinton’s national security advisor Tony Lake asked me to join the Obama campaign in early 2007.  Having had the privilege of working in the Reagan campaign in 1980 and spending about five years in his administration, I sensed that Obama could be just as transformational as Reagan was.

However, until recently Obama has been anything but, especially in his foreign policy.  The question is why.  Obviously unexpected events and partisan resistance have played a part, but there is another more fundamental reason, and that is the team he initially brought into his administration.

In staffing his national security team and the bureaucracy, Obama relied too much on what Doris Kearns called the “team of rivals,” and the foreign policy establishment, most of whom did not and still do not share his transformational views about the U.S. role in the world. By leaving Bush appointee Robert Gates in the Pentagon, placing his campaign rival Hillary Clinton at State, making retired Marine Corps Commandant, General James Jones, his national security advisor, and bringing CIA operative John Brennan into the White House, Obama essentially ceded control of foreign policy, not only to those who did not share his views on foreign policy, but who supported candidates for president who had views on national security issues that were dramatically opposed to his. For example, on the invasion and occupation of Iraq, the appropriate level of defense spending, and the role of nuclear weapons in U.S. defense strategy.

I saw this first hand.  When Tony Lake asked me to join the campaign, Hillary Clinton was 40 points ahead in the polls, and her chief foreign policy guru, the late Richard Holbrooke, told us that if we supported Obama none of us would get jobs in the Clinton Administration.  At the first meeting of the Obama team at Lake’s house in early 2007, there were just five people:  Lake, Susan Rice, Denis McDonough, Peter Singer (then at Brookings), and myself.

Once the campaign got going, Tony Lake asked Pete Singer and me to coordinate the national security team.  Peter and I recruited a first-class group of very talented and motivated, mostly young people who worked very hard on the major national security issues for the next 18 months.  Since I am technologically challenged, Pete did most of the heavy lifting on the internet during the campaign.

After Obama’s election, almost none of the people who had worked so hard with Peter and I and took a big political risk early in the campaign received jobs.  Understandably, both Gates and Clinton and Jones only agreed to work for Obama if they had effective control over the appointments to their teams.  As a result, most of those who took the risk of supporting Obama early suffered Holbrook’s curse.

Thus, the national security bureaucracy for the most part was staffed by veterans of the Clinton administration who were part of the military–industrial-congressional complex, enthusiastically supported the invasion and occupation of Iraq (opposition to which was Obama’s main campaign issue), and high levels of defense spending.  For example, the number two person at the Pentagon, the deputy secretary of defense, was actually a lobbyist for one of the major defense corporations, and another major Pentagon advisor had advocated bombing North Korea.

Peter Singer, despite the fact that he did yeoman’s work in the campaign, and was much more qualified than those who were placed in the top Pentagon posts, did not get a job.  What happened to Peter Singer was a microcosm of the way in which the national security team was staffed.  Paul Richter of the Los Angeles Times captured the frustration of our team in a story he correctly titled “Obama’s Orphans.”  This did get some notice from the White House but nothing really changed.

Obama has paid a heavy price for not placing his orphans in the national security bureaucracy.  Let me give a few examples.  First, after his Prague speech in early 2009, it was clear that the new president wanted to make significant reductions in the number of nuclear weapons in the U.S. arsenal.  He pledged to reduce the role of nuclear weapons in our national security strategy and urged others to do the same.  However, his Pentagon’s 2010 nuclear review was not significantly different than the 2006 review done by the Bush administration.

And to compound the situation, when President Obama asked Secretary Gates for other options than that proposed by McChrystal, he refused to provide any.  Only Vice Chairman of the Joint Chiefs of Staff, General James Cartwright, was willing to do so.  But when Obama asked Gates about designating Cartwright to succeed Admiral Mullen as the Chairman of the Joint Chiefs of Staff, Gates told him that this would undermine Mullen’s effectiveness for the rest of his term, ignoring the fact that the Chairman, like the other Chiefs, is appointed for only two years instead of four, so that presidents can get their own principal military advisor, and while normally appointed for a second term, can be replaced, as Gates did with Mullen’s predecessor, General Peter Pace.  Finally, when Obama agreed to surge 30,000 more troops to Afghanistan, not wanting be dragged into a Vietnam or Iraq quagmire, he set a deadline of December 2011 to being withdrawing those surge troops from the country.  However, both his Secretaries of State and Defense did not support this decision in testimony before Congress.

Third, even though Obama had campaigned to get us out of the wars in the Middle East, his national security team not only urged him to remain in Iraq and intervene in Syria’s civil war, but publicly castigated him for not doing so, particularly after leaving office.

Fourth, before sequestration capped defense spending, the Gates-Obama Pentagon actually increased baseline defense spending above the levels projected by the outgoing Bush administration. When Obama decided to cap this “gusher of defense spending” after the 2010 election, he did not even inform Gates.

It is important to note that the team of rivals were talented and dedicated people.  The problem was that they did not share Obama’s transformational view.

Now that most of these individuals have left the administration and Obama does not have to worry about Presidential or Congressional elections, he may be able to become the transformational president he wanted to be. Restoring diplomatic relations with Cuba and getting a climate change agreement with China are good first steps. Closing Guantanamo, supporting Senator Gillibrand’s bill to remove prosecution for military sexual assault from the military chain of command, unilaterally reducing nuclear weapons to 1,000, and concluding a nuclear deal with Iran would be even more significant steps towards leaving behind a transformational national security legacy that President Obama wants and deserves.