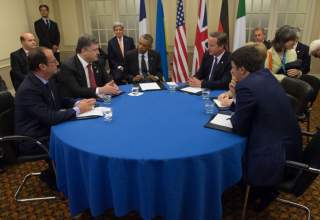 President Obama doesn’t seem to know what hit him in Ukraine the past week. He has been thoroughly outmaneuvered by Russian president Vladimir Putin. And yet the U.S. president expresses himself as if he still has something of consequence to say on the matter. The mismatch between the realities on the ground and the nature of the president’s pronouncements reveals a president who is out of touch with reality.

On Wednesday of last week, Putin unveiled a cease-fire concept for the Ukrainian government and pro-Russian separatist insurgents in eastern Ukraine. Ukrainian president Petro Poroshenko promptly embraced the concept as a basis for a cessation in the fighting. The next day, the parties announced they would begin observing a cease-fire that likely would include provisions put forth by Putin: offensive operations halted, including airstrikes; Ukrainian artillery withdrawn from proximity of separatist-controlled cities; prisoners exchanged; “safe corridors” established for the delivery of aid and reconstruction materials to war-torn areas; international observers deployed to monitor the truce and the Ukrainian-Russian border.

In terms of the ongoing diplomatic drama involving Ukraine, Russia and the West, this was a huge development. The New York Times on Friday quoted Timothy Ash, a London-based expert on the region at Standard Bank, as saying the agreement probably signifies that the Ukrainian-Russian conflict now will be congealed into a kind of diplomatic standoff like those involving other Russian-dominated, quasi-independent “gray zones,” such as Transnistria in Moldova, or Abkhazia and South Ossetia in Georgia.

A day earlier, the Wall Street Journal suggested such a development “could scuttle Kiev’s plans to move closer to Europe” as a means of reviving its economy. The paper said Putin wants to create  “a boundary defining the rebel-held territory in the Donetsk and Luhansk regions,” with Ukraine enjoined from sending troops into those regions. “Disputed borders,” added the Journal, “would make NATO membership for Ukraine all but impossible.”

Just so. That’s precisely what Putin has wanted all along—to thwart any prospect that Ukraine could join NATO and that Western nations could thus move troops to the Russian border. The Journal piece, written by Paul Sonne and Gregory L. White, offered a rare bit of analytical perspective in describing the Russian viewpoint:

“The move toward a compromise drives home the reality that Russia, with centuries-long cultural, linguistic and economic ties to Ukraine, time and again has proved willing to put more on the line than the West to exert influence over Kiev. Russia views preventing Ukraine from entering the North Atlantic Treaty Organization as vital to its own national defense.”

That’s the reality that President Poroshenko bowed to in accepting the Putin deal. Clearly, neither the EU, nor the United States is prepared to get involved militarily in the dispute. And, although Russia has steadfastly denied involving its own military in the Ukrainian civil war, recent events have demonstrated that Putin will initiate any stealthy actions necessary to ensure that pro-Russian elements in eastern Ukraine will not be overrun by Kiev.

As Standard Bank’s Timothy Ash notes, Kiev faced a danger of losing crucial strategic territory. “Any delay would probably have seen the loss of Mariupol,” he said, “and then a land corridor secured by Russia to Crimea.” This, he added, likely would have been “terminal” for the Ukrainian economy.

What we see here is the force of an unrelenting power differential. In the realm of international relations, power comes in many forms—in the potency of military hardware and technology and the ability to use it; in population and national wealth; in the intensity of national feeling related to particular conflicts; in geopolitical advantage and imperative; in the willingness to expend national treasure and blood on behalf of national goals. When all of these elements of power are added up and assessed, it becomes clear that Russia has the power to exert influence over Ukraine pretty much as it wants to.

And what is Obama’s reaction to this lesson in foreign-policy realism? Responding to the Putin proposal and Poroshenko’s apparent embrace of it, he expressed himself as if he considers words to be a substitute for power. “No realistic political settlement can be achieved,” he declared, “if effectively Russia says we are going to continue to send tanks and troops and arms and advisers under the guise of separatists, who are not homegrown, and the only possible settlement is if Ukraine cedes its territory or its sovereignty.”

Expressed in the context of what just had happened in Ukraine, these are not the words of a serious man. In point of fact, realistic political settlements can only be achieved when the parties involved understand the fundamental power differentials that exist, as Poroshenko apparently does and Obama apparently doesn’t.

This has been one of the underlying themes of those who have argued from the beginning of this drama that the West doesn’t have a stake in Ukraine’s fate to even approach the stake of Russia, which has included Ukraine within its sphere of influence for the past three and a half centuries and has viewed that relationship as crucial to its sense of national security.

This raises a question: If we don’t have a serious stake in the matter, and we’re very clear with ourselves and the world that we won’t fight over it, and the preponderance of power flows from other directions, why are we even involving ourselves in the controversy?

To fight with words at the precise moment when power has overwhelmed your policy not only renders an appearance of weakness, it makes the president look bewildered, like he doesn’t really understand what’s going on. That’s not the image that great nations should project.