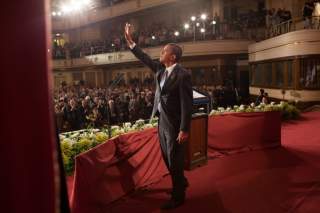 President Obama’s speech today at West Point could hardly contrast more starkly with George W. Bush’s at West Point on June 1, 2002. After 9/11 Bush announced that America needed to go on the offensive. Containment was passé, old school, ready to be put out to pasture. He was offering the headier brew of preemptive action. Bush announced, “Deterrence, the promise of massive retaliation against nations, means nothing against shadowy terrorist networks with no nation or citizens to defend. Containment is not possible when unbalanced dictators with weapons of mass destruction can deliver those weapons on missiles or secretly provide them to terrorist allies.”

Bush’s claims were bogus and set the course for the Iraq War, a conflict that has inflicted severe damage upon American national security, both by the sheer human and financial cost of the war as well as by the inadvertent fomenting of terrorism across the Middle East. The upheaval in Syria, where jihadist groups are vying with each other for supremacy, is a direct result of the conflict in Iraq.

Now, over a decade later, Obama announced a very different stance, one that has incurred the ire of GOP Senators such as John McCain, Kelly Ayotte, and Lindsey Graham who jointly declared that Obama's decision to pull U.S. troops out of Afghanistan by 2016 is a "monumental mistake and a triumph of politics over strategy." Obama, by contrast, said in his commence speech at West Point: "A strategy that involves invading every country that harbors terrorist networks is naïve and unsustainable." The blowtorch approach of the Bush administration is out. A more discriminating approach is in in. Wars of choice are not something Washington should promiscuously choose. One reason is that the U.S. does not need to adopt a siege mentality:  claims that America is headed for the skids, he said, are bunk. The threats that the U.S. faces are manageable, not overwhelming:

America has rarely been stronger relative to the rest of the world. Those who argue otherwise – who suggest that America is in decline, or has seen its global leadership slip away – are either misreading history or engaged in partisan politics. Think about it. Our military has no peer. The odds of a direct threat against us by any nation are low, and do not come close to the dangers we faced during the Cold War.

But what to do with all that power? A summit meeting with Russian president to settle differences over Ukraine? A Camp David meeting between Israeli Prime Minister Benjamin Netanyahu and Palestinian leader Mahmoud Abbas? Or should America simply husband its might?

Obama did not say. Instead, Obama focused on conceptual debates about foreign affairs. For foreign policy mavens, at least those inclined toward the realist persuasion, there was a lot to like—the dismissal of military adventurism, for example. And for those inclined toward the liberal internationalist persuasion, there was also a lot to like—the embrace of multilateralism and collective security, for example. Obama reverted—actually, it would be more accurate to say adhered—to his old habit of splitting the difference between various schools of thought.

What he had to say of practical consequence was markedly limited. Obama has largely ended the ancient regime. The U.S. is out of Iraq. The war in Afghanistan is coming to a close. But Obama has not made clear what he would substitute for the interventionism of the Bush years. A $5 billion “Counterrorism Partnership Fund”?

When it comes to strategic priorities, Obama was dauntingly vague. The fact is that America’s allies are nervous. NATO is incapable of deterring an attack on the Baltic states. China is intimidating, or seeking to intimidate, its neighbors. Beijing and Moscow are seeking to forge an anti-American alliance. The Middle East, which remains an area of vital American interests, is a mess, with Washington’s longtime ally Egypt faltering politically and economically. And Secretary of State John Kerry’s attempt to forward a peace between Israelis and Palestinians went nowhere.

Obama has ended the Bush era in foreign policy, at least until the neocons, currently in exile, attempt to make their comeback in 2016. For now, Obama has made clear what he is against. But he has not explained what he is for.