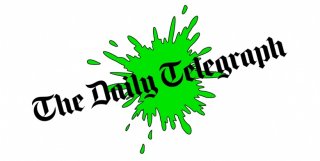 Is the age of ethics in journalism over? Former Telegraph columnist Peter Oborne’s explosive allegations about the causes of his resignation from the London paper invite this question, as they appear to share a root with recent scandalous conduct around the press.

Oborne makes several allegations, which his former paper has yet to answer in detail. He says that the Telegraph deliberately and repeatedly downplayed critical coverage of the massive bank HSBC so that it would resume buying advertising space in the paper. The Telegraph’s investigations team had at the end of 2012 published a string of articles alleging funny business at HSBC’s offshore-banking arm on the island of Jersey. Lawyers for the paper’s billionaire owners, Oborne charges, “became closely involved.” “From the start of 2013 onwards,” he writes, “stories critical of HSBC were discouraged. HSBC suspended its advertising with the Telegraph. Its account, I have been told by an extremely well informed insider, was extremely valuable.”

Oborne reports that “executives say” that Murdoch MacLennan, chief executive of the Telegraph Media Group, “was determined not to allow any criticism of the international bank.” Oborne links this to a desire to get HSBC to buy advertising again. Oborne quotes “one former Telegraph journalist” saying that MacLennan “would express concern about headlines even on minor stories....Anything that mentioned money-laundering was just banned, even though the bank was on a final warning from the US authorities. This interference was happening on an industrial scale.”

Oborne argues that an examination of the Telegraph’s coverage of HSBC in recent years, particularly in the past week, shows the impact of the interference: while the Telegraph’s rivals were giving HSBC’s scandals front-page attention, the Telegraph had short stories buried inside the paper. And he suggests that several other Telegraph advertisers have earned similarly unusual attention.

The danger of advertiser interference in journalism is an old one. Yet Oborne’s tale of a newspaper shedding jobs and becoming increasingly beholden to its advertisers suggests that the incentives around advertising have changed. That shouldn’t be a surprise, as advertising has changed radically in recent years. Newspapers used to be one of the only good venues for advertising, which gave them the pick of buyers of ad space and allowed them to extract a premium on ad sales. The rise of the internet changed that. Any website—not just newspapers—can host advertising space, and major companies like Google have made tools that allow website owners to easily cover their site in ad blocks and then automatically fill those blocks with advertisers. Media outlets must fight harder to capture a smaller share of the ad business. Ad buyers have a lot more power—and harried media executives face stronger incentives to defer to big buyers.

Under these circumstances, a new understanding of the “firewall” between a media outlet’s ad sales and its journalism may be necessary. Radical transparency on ad purchases and even on communications with buyers would be one solution. Press organizations might, for example, release all this information, with a delay (perhaps a year or two) to allow their business side some discretion.

Mary Fitzgerald, editor-in-chief of openDemocracy, the outlet that ran Oborne’s allegations, suggests stronger media regulation could also restore the firewall—although this would be a nonstarter in the United States, where the Constitution protects the press from such interventions. And Fitzgerald adds that nonprofit status for media outlets like hers means that “corporations don’t get a say in how we [...] hold the powerful to account.” Yet nonprofits need money, too—and the finances of many for-profit media outlets suggest their owners aren’t always insistent that their publications stay in the black. For profit or not, serious, independent journalism may need help to survive in an environment that rewards deference and vulgarity. Pierre Omidyar’s First Look Media may be so independent that its writers air their disputes with him on his own pages, but it’s doubtful that there are many other investors and foundations willing to provide cash with few conditions. Most outlets will need to keep their independence under the tough conditions Oborne describes.

Oborne makes, in passing, a number of other charges. One sticks out: that the paper had shifted its editorial standards in order to get more online traffic. Newsworthiness and accuracy, he says, were wittingly sacrificed. In one case, the paper ran a story online about a woman who’d had a plastic surgeon give her a third breast. “One despairing executive,” writes Oborne, “told me that it was known this was false even before the story was published.” This highlights a second problem facing media outlets today: the strong incentive to sensationalize stories, to engage in publicity stunts, and to emphasize the clickiest stories, rather than the most important. The Telegraph’s Twitter feed on the day Oborne’s story ran offered them little defense against such charges: readers were told that penguins can no longer taste fish, offered a list of “the 20 most ridiculous things [soccer star] Zlatan Ibrahimovic has ever said,” introduced to a woman who “pays [her] teenage grandson to be [her] IT consultant,” and invited to watch a video of Channel 4 News anchor Jon Snow “describ[ing] what it’s like to be high on super strength skunk.”

But Oborne’s example of the false story published for clicks shows that the “click culture” doesn’t just corrode an outlet’s quality—it also puts new pressures on its integrity. The Telegraph is hardly the only sinner in this regard. 2015 has brought a raft of novelty interviews of prominent political figures. In January, CNN’s Ashley Codianni conducted “the first ever official Snapchat interview with a U.S. lawmaker,” lobbing softball questions at Senator Rand Paul via the photo-messaging app. Last week, Buzzfeed News’ Mark Di Stefano and Anna Mendoza interviewed Julie Bishop—Australia’s foreign affairs minister and deputy leader of the troubled Liberal Party—in emoji. Bishop’s party had just emerged from a major leadership crisis; the Buzzfeed reporters asked her if she had a “spirit animal.” Both Buzzfeed and CNN eagerly promoted the interviews as “exclusive.” These interviews weren’t about getting the powerful on the record for the benefit of the public. They were a transaction: the politician bestows a few minutes’ audience upon the journalist; the journalist converts this into publicity, which the two then share. The public interest has little place in this exchange—the public’s only role is to click.

Perhaps journalism needs a new firewall to prevent this sort of thing. Just as a respectable outlet strictly separates its journalism from its advertising sales, it should separate its journalism from its traffic generation. Reporters who aren’t being pushed to deliver numbers will be able to treat their subject matter more seriously; editors that are in the business of news, not “content,” will have the latitude to shoot down the publication of novelties, falsehoods and junk. Traffickers ought to be finding ways to sell the stories they’re given, not creating stories themselves; when content is created for traffic, it should be clearly distinguished from journalistic content. (Buzzfeed is the great test case for this; its record is mixed.)

In spite of all these pressures on the media’s integrity, the public need not despair. The irony of the new media environment is that it has damaged media institutions, but devalued them. As one panelist noted at a recent National Interest discussion on the media and national security, online audiences are much less loyal to particular outlets. Outlets have to win back their audience every day, feeding the ethical pressures discussed above. But that audience is getting its news from a wider array of sources, making the corruption of a particular source less damaging. As Oborne noted, most outlets gave more attention to the HSBC scandal than the Telegraph; online readers who don’t get the story in one place can get it somewhere else. And this flatter media environment means there are lots of hungry up-and-comers eager to break a story that the old hierarchy ignores.

That points us to a solution for readers, since radical transparency and new firewalls probably won’t be forthcoming from much of the media: Consume broadly. The truth is still out there.

John Allen Gay is assistant managing editor of The National Interest. He tweets at @JohnAllenGay.