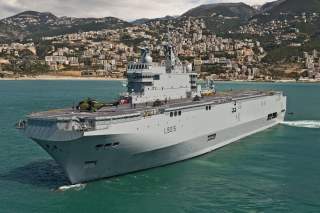 Brazil could use a pair of Mistral-class amphibious assault ships. Fortuitously, a pair just came on the market.

As has become well known, Russia contracted with France in 2009 to build a pair of Mistral-class amphibious assault ships in French yards. The French would then assist in the construction of two additional Mistrals in Russian yards, giving the Russians a chance to redevelop their skills at building large surface warships.

The Mistrals displace 21,000 tons, can make almost 19 knots, and can carry two-to-three dozen helicopters, in addition to small boats and a contingent of marines. They have advanced communication systems necessary for managing complex amphibious operations (the sophistication of this system was one of the sticking points in the export deal with Russia).

The French expected to deliver the first ship, Vladivostok, in late fall of 2014, but relations between NATO and Russia took a disastrous turn when civil war broke out in Ukraine. France has now indefinitely suspended delivery of the two warships. It is unclear whether France will ever turn either ships over to Russia, or what the French will do with the ships if the deal is permanently cancelled.

In this context, several analysts have proposed solutions, including sending the ships to the United States, China and Canada. The first two are obvious nonstarters (the United States will not spend its precious shipbuilding funds on a foreign-built capital ship, nor will it allow the export of advanced amphibious warfare technology to China), and while Canada makes a great deal of sense, the unwillingness of Ottawa to step up its military spending means that a deal is exceedingly unlikely.

Brazil and France have a long-standing procurement relationship. In the 1990s, as Brazil’s aircraft carrier Minas Gerais came to the end of its useful life, the French sold the Foch, a much larger ship, to the Brazilian Navy. The Foch joined the Brazilian Navy as “Sao Paulo” in 2000, carrying a contingent of A-4 Skyhawk fighter-bombers. Sao Paulo undertook several cruises in her first five years of Brazilian service, then entered a long period of repair and modernization.

Sao Paulo was expected to return to service early this decade, but suffered a serious fire in 2012. Now, the material state of the carrier remains in question. Under the best-case scenario, Brazil will try to return to service a fifty-five-year-old aircraft carrier, using planes that first flew in 1954. Moreover, Brazil has no clear plan to replace Sao Paulo. No country is currently attempting to sell an aircraft carrier, and the Brazilian shipbuilding industry has zero experience with such a large, complex platform.

Why would Brazil need an amphibious assault ship?

An amphibious assault ship, like the Mistral, gives a navy the capacity to undertake an independent leadership role in a littoral crisis. Several Latin American countries have expressed frustration about their ability to conduct maritime relief operations independent of the United States. Following the 2009 Haitian earthquake, for example, the United States and Brazil clashed over credit and precedent in the relief effort. Brazilian ships eventually contributed to support efforts, but later and with less impact than they might have otherwise had.

In such cases, the introduction of a Mistral (or similar amphib) would have given the Brazilian Navy an offshore command center with which to coordinate relief efforts. The operation of helicopters from the flight deck and small boats from the well deck would have facilitated quick transport of troops, medical and support teams and equipment to and from the shore. Helicopters and unmanned aerial vehicles also would have given the Brazilian Navy far greater situational awareness.

In short, in maritime relief operations the ownership of an amphib makes the difference between a leadership role (including the ability to manage and steer the course of the operation) and a support role (in which another navy calls the shots). And for most countries, maritime relief operations happen much more often than active combat operations. Moreover, the French Navy has used the Mistral type effectively in maritime patrol missions in the Mediterranean, where its aviation and command and control capabilities allow it to manage a wide space of ocean.

That said, the Mistrals do offer some offensive combat capabilities. The Mistrals are probably too small to operate the F-35B Lightning II, and Brazil is unlikely to acquire any of the world’s dwindling fleet of Harrier jump jets. However, several navies have begun to work on increasing the naval lethality of their helicopter forces. During the NATO intervention in Libya, British and French attack helicopters flew combat strike missions off the deck of the French Tonnerre. Moreover, a few navies have looked into arming naval helicopters with anti-ship cruise missiles. Such helicopters could significantly extend the strike range of a Mistral, assuming an access-friendly environment.

The past fifteen years has seen an explosion of interest in amphibious warfare vessels. In addition to the plethora of large amphibs in the USN, navies from countries ranging as widely as South Korea, Japan, Italy, Spain, the Netherlands, Australia, New Zealand, China, India, Singapore and Russia have begun to invest in warships that can deploy boats, helicopters and soldiers from sea to land.

Indeed, in some sense, amphibs have become the dreadnoughts of the twenty-first century, with one major difference; they are light years more useful than gun-laden counterparts. Cheaper and easier to maintain than aircraft carriers, amphibs offer a single platform that can combine sea control, offensive strike and disaster relief. Even a few African countries have begun to explore dipping their toes into the market. Algeria has recently acquired its first amphib, a modest ship that nevertheless has had a big impact on the Algerian navy’s ability to manage its coastline.

Yet, thus far, none of the big Latin American navies have demonstrated much more than a passing interest. Brazil, Argentina and Chile have historically tried to remain competitive with the world’s most advanced navies with respect to capital ships. Each invested heavily in battleships at the dawn of the dreadnought era, and Brazil and Argentina both acquired aircraft carriers during the Cold War. The disinterest in amphibs is curious, particularly because amphibs are ideal naval vessels for countries that don’t anticipate having to fight in the near future. While operating fixed-wing aircraft carriers has strained the naval budgets of Brazil and Argentina, amphibs don’t stretch means nearly as far.

And it’s not as if the region lacks in maritime support needs. Over the past several years, the United States has taken advantage of the paucity of local capabilities to engage in regional goodwill tours with its amphibious warships and hospital vessels. The Caribbean, in particular, suffers from regular natural disasters. Perhaps most important, the navies of the region have an almost continuous need for sea control to manage problems of drug and human trafficking.

The Sao Paulo has been dead in the water for several years, and in any case is only capable of operating ancient A-4 Skyhawks. Even if Brazil can build a new carrier, or have one built, Brazil’s naval aviation corps will have deteriorated entirely. Mistrals aren’t carriers, and they can’t do all of the things that carriers can do. However, they can do some things that carriers can’t, and these things will turn out to be a lot more useful for Brazil.

The Brazilian Navy has made some questionable procurement decisions in its pursuit of international relevance. In 1910, it acquired a pair of dreadnoughts, which enjoyed forty-year careers highlighted by a pair of mutinies and the bombardment of Brazilian shore positions. Brazil operated the aircraft carrier Minas Gerais for about thirty-five years, although she engaged in no combat operations. Minas Gerais probably turned in her most useful service late in career, after a broken catapult limited her to amphibious operations. And Sao Paulo, as noted, has done little to usefully extend Brazil’s influence in the region.

The Mistrals are different. They can increase Brazil’s regional influence not merely by existing, but also by doing things on a daily basis. Vladivostok and Sevastopol (we would presume under different names) would immediately become the most impactful warships owned by a South American navy since the early days of the twentieth century. The two ships could even operate along the Amazon, which is navigable for big ships for large extents.

Moreover, unlike the Southern Cone dreadnought race, the Mistrals are unlikely to spark an antagonistic arms race between South American countries. While modern amphibs offer some combat capabilities, they don’t fight one another. Indeed, the most beneficial impact of the Mistrals might be to convince Chile or Argentina of the usefulness of having a modern amphib on hand in order to maintain influence during humanitarian relief operations.

In short, Mistrals flying the Brazilian naval flag make a lot of sense. The biggest impediment remains cost; purchasing Vladivostok and Sevastopol would strain the Brazilian defense budget to the breaking point in the short term. But the prospect of having a useful naval partner in Latin America should make both Washington and Paris think hard about how they can facilitate a deal that would turn a pair of Russian capital ships into a pair of Brazilian capital ships.