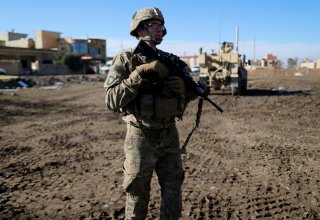 Disentangling the United States from the GME will be a pragmatic and protracted process. A clear trajectory of the United States in the Middle East may move local actors toward détente. The United States will need to judge how the region digests each move before taking the next, with robust diplomacy seeking to leverage efforts to diminish military presence and commitments with movement toward regional détente and political-military dialogue and confidence-building measures among the regional actors. After all, our priority is building a credible and affordable deterrent capacity to deal with the two revisionist great powers, China and Russia. There is little margin for error.

Robert A. Manning is a Senior Fellow of the Scowcroft Center for Strategy and Security at the Atlantic Council. He served as a senior counselor to the Undersecretary of State for Global Affairs from 2001 to 2004, a member of the U.S. Department of State Policy Planning Staff from 2004 to 2008, and on the National Intelligence Council’s Strategic Futures Group, 2008–2012.

Peter A. Wilson is an Adjunct Senior Defense analyst at the RAND Corporation and regularly conducts lectures on national security policy at the Eisenhower School, National Defense University.