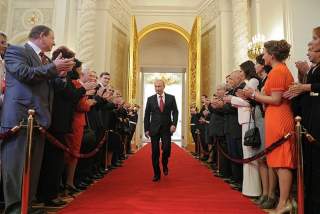 While global oil prices have collapsed, Russia most certainly will not. In fact, it may even emerge stronger from the current supply glut.

That was one of the major points that emerged from a panel discussion hosted by the Center for the National Interest on February 24, 2015. The discussion, entitled Russia’s Energy Sector and the Oil Price Collapse, featured three energy experts including Dr. Tatiana Mitrova, the head of the Oil and Gas Department at the Energy Research Institute at the Russian Academy of Sciences.

Mitrova did not seem particularly worried about the impact of sanctions or falling oil prices on the Russian economy, noting that major Russian energy companies such as Gazprom and Rosneft have large reserves and government support.

Exports are another factor that will mitigate the pain Gazprom and Russian oil exporters feel from the drop in prices. Indeed, Mitrova pointed out that the sharp devaluation of the ruble relative to the dollar in recent months will make exports increasingly lucrative to Russian energy exporters. That’s because revenues from energy exports are denominated in U.S. dollars while many of their costs—such as labor—will still be in rubles.

Furthermore, companies like Rosneft are not hugely affected by lower prices because of the way Russia taxes the oil industry. Specifically, as others have pointed out, in Russia “the per-barrel tax rate decreases as oil prices fall, shifting most of the upside/downside due to changes in the oil price from the oil producers to the state.” Consequently, according to Mitrova, it does not matter greatly to oil companies if prices are $50 or $100 a barrel.

Russia’s gas industry is a different story, however. According to Mitrova, Russia is experiencing a “huge gas glut” with a current excess of about “110-140 billion cubic meters of gas.” Because there is not enough domestic demand for all this gas— and only Gazprom is currently allowed to export gas— the situation is becoming “tough” for Russian gas companies, especially smaller enterprises. In fact, Mitrova said there is already a “price war” amongst Russian gas companies for the domestic market.

While not challenging most of her assessment of the current state of the Russian energy market, the other two panelists—Frank Verrastro, Senior Vice President for Energy and Geopolitics at the Center for Strategic and International Studies (CSIS), and Charles Ebinger, a Senior Fellow in the Energy and Climate Initiative at the Brookings Institution—did depart from Mitrova when it came to how quickly global energy markets will recover.

According to Mitrova, there is a “major expectation” among Russian analysts and politicians that the price of oil will recover soon “because no one is happy with lower prices.” In fact, she suggested that the general feeling in Russia is that prices will be back up in the $80 per-barrel range by the end of this year.

Ebinger and Verrastro both disagreed, arguing that low prices are here to stay for a while. Ebinger, in particular, argued that it is “very hard to see the upside for petroleum demand that would drive prices back up.”

To illustrate this point, Ebinger pointed to the numerous fundamental changes taking place in consumer markets, including greater energy efficiency, demand topping out in much of the developed world and a reduction in subsidies among some of the larger emerging markets like India and Indonesia. Even in China—which, along with India, is expected to anchor demand growth in the coming decades—automobile demand is slowing.

As a result, Ebinger expects that the oil market “will test the upper thirties” before all is said and done, and that “it will be a long, long time before we see eighty plus dollars in the market.”

Verrastro agreed with Ebinger’s outlook on the oil market. “We could be in this [depressed market] a good, long time,” Verrastro said. “Certainly for 2015... and some people think into 2016.” Ebinger and Verrastro did disagree on why oil markets will eventually recover. Whereas Ebinger felt that renewed global economic growth would be the “catalyst” that revived oil markets, Verrastro argued that eventually supply will catch up to reduced demand, driving prices back up.