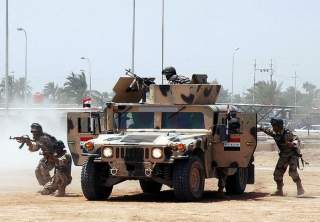 Iraq had a miserable 2014. The Islamic State (IS) reentered the country in large numbers early in the year, routing the Iraqi security forces in June with its swift territorial conquests and gaining tacit support from a large segment of Iraq’s Sunnis in the process. But the Iraqi government is also confronting a fiscal crisis that threatens to compound its security morass. It wants help from Saudi Arabia and the other major Arab oil producers in the Gulf but is in for a big disappointment.

Nouri al-Maliki—who last summer was in the last few months of his premiership—was unable to pass a national budget through the Iraqi parliament. Disputes with the Kurds over oil revenue sharing reached its peak. And the Iraqi parliament itself resembled a freewheeling, but useless, debating society increasingly being ignored as an impediment by the prime minister’s office.

In fact, the only upshot for the Iraqi Government was the price of crude oil: by July 2014, the average price for a single barrel of Iraqi crude was slightly above $102.

Now, even that windfall has changed. Brent crude prices over the past several months have declined by roughly 60 percent from last year’s peak. The Iraqi Government, predictably, comes out as another major loser from these developments. Indeed, it lost 27 percent of its projected revenues in 2014 alone. At a time when Baghdad is fully engaged in taking back their country from IS and expending more funds on defense-related costs like salaries for soldiers, military equipment, and battlefield intelligence assets, the dip in crude is severely straining Iraq’s budget. Prime Minister Haider al-Abadi has bluntly stated that the lower value of crude exports will make the job of extinguishing the Islamic State terrorist movement from Iraqi territory far more difficult.

If last month’s oil figures are any indication, Prime Minister Abadi has more than enough reasons to be concerned. The short-term rebound in crude oil markets over the past week is not being seen in Iraq at the moment: whereas Brent traded above $55 per barrel at the end of January, Iraqi crude traded at an average of $41.45 during the same time period due to the steep discounts that the Iraqi Government has offered to Asian consumers. Combined with bad weather near the port city of Basra, which slowed export operations, Baghdad lost nearly $2 billion in revenue last month compared to December 2014.

For a nation already experiencing a budget shortfall this year, the latest numbers could be a fiscal calamity if the trend continues over the long-term. Indeed, in a sign of just how distressing the oil market has become for Iraq’s bottom-line, Vice President Ayad Allawi hinted that it might be time for an extraordinary session with OPEC and non-OPEC oil producers to find a way to boost prices back up to where many of exporters would like. This makes sense given that 90 percent of Iraq’s budget depends on earnings from crude exports. Iraq’s U.S. ambassador recently argued that the price of oil “will be the determining factor this year in how strongly we can repel ISIS.”

Unfortunately, Baghdad may be in for a significant disappointment, since the other Arab oil producers in the Gulf who helped institute oil’s new price regime show little interest in letting oil climb back to anywhere near pre-crash level prices. True, Kuwait allowed the Iraqis to postpone U.N. reparations from the first Gulf War for a year, and oil is already back up to around $60 per barrel, something both the Kuwaitis and Iraqis seem to appreciate.

However, the Kuwaitis will not postpone these debts forever, and oil’s recent price increase had more to do with disruptions in Libya than it did with the Gulf states choosing to stabilize the market because they have generally refused to cut production. In fact, the Iraqi price reductions in East Asia were largely made so they could compete with Saudi Arabia’s own price discounts in the fight for market share.

It seems Baghdad’s core challenge in this regard is to persuade Saudi Arabia to revisit its controversial oil market strategy of intentionally letting the market collapse in order to punish Iran and Russia for their support of Syria’s Assad regime and to stunt growth in new international sources of unconventional, high-cost oil extraction like shale oil. Collapsed oil prices were deliberately “engineered” by the Saudis, according to a top U.S. official at the Federal Reserve, so it is difficult to envision the Saudis stepping away from that strategy just when the Kingdom is starting to see benefits, including a declining rig count in the United States.

It is true that Saudi Arabia is undergoing a tentative thaw in its relations with Baghdad now that Nouri al-Maliki has been forced to give up the post of prime minister. But the Saudis still remain deeply skeptical of Abadi’s will and ability to turn over a new leaf.

The Iraqi government’s reliance on sectarian militias that perpetrate atrocities against the Sunni population—many of which receive support from Iran—also deters greater support from Gulf monarchs. Indeed, the United Arab Emirates recently included several of these militias on its first formal list of terrorist groups. Saudi Arabia’s ambivalence about Iraq is in large part about Iranian control: so long as Iraq is seen as an extension of the Shi'ite crescent that enables unruly Shi’ite militias, the kingdom is unlikely to do it any favors.”

There has been a change in leadership in Saudi Arabia, but for the time being, King Salman is signaling continuity in oil policy as well, retaining Ali al-Naimi as oil minister—the same man who launched the controversial Saudi gambit (it should be noted however that al-Naimi’s authority has been hollowed out in favor of the king’s influential sons). Iraqis should not hold out hope for an emergency OPEC summit—the Saudis have given no indication that they will grant it, even as other Arab states such as Oman are begging for a change in approach.

The Abadi administration is in a terrible bind. Either it spends money that it doesn’t have to keep up with the subsidy and defense commitments that it has made—thus running a multi-billion deficit that will be hard to pay off without a crude price rebound—or it makes painful cuts in order to conserve resources that are required to sustain the Islamic State counteroffensive. This is a serious concern that should be registering with anybody in the international community who hopes to bring about the defeat of ISIL.

Iraq’s government has reasons to worry about its current fiscal crunch. But it shouldn’t count on Saudi Arabia and other Arab members of OPEC to come to the rescue.

Daniel DePetris is an analyst at Wikistrat Inc., and a contributor to the Atlantic Council’s Rafik Hariri Center for the Middle East. David Andrew Weinberg is a Senior Fellow at the Foundation for Defense of Democracies.