Oil Sanctions on Iran Will Benefit Russia. Here’s How. 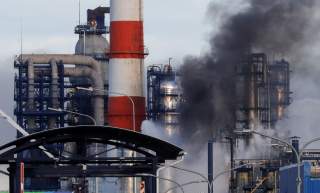 The main feature of the new U.S. sanctions policy against Iran is its unilateral nature. This time, Washington is acting without broad international support, which was brought the Islamic Republic to the JCPOA negotiations table in the first place. Though this policy is risky, it might prove that the unilateral approach of the Trump administration to foreign policy is effective. There are many factors putting the success of sanctions in jeopardy. Among them is Russia, which both benefits from these sanctions and has the means and incentives to help Iran in relieving the American pressure.

Observers have already correctly noticed that the new sanctions against Iran are beneficial to Russia in two regards. On the one hand, Russia is capable of and interested in substituting Iranian oil blocked by the sanctions. Here, surprisingly, Moscow finds itself among beneficiaries of U.S. foreign policy not only from an economic standpoint. Significant importers of Iranian oil—China, Italy, France, Turkey and, to a lesser degree, South Korea—are also important to Russian foreign policy. If those countries buy more oil from Russia instead of Iran, it will undoubtedly support the further development of their relations with Moscow on a wider range of issues.

On the other hand, trade with Russia might become for Iran one of the most efficient tools to relieve the pressure of sanctions. Iran can receive necessary goods and, probably, investment from Russia for its oil, which will be consumed in Russia, freeing additional volumes of Russian oil for export. The meaning of this cooperation goes beyond Russian-Iranian relations or even the conflict between the Islamic Republic and other international actors. This partnership strengthens the ideological foundation under the Russian policy within the geopolitical showdown with the United States, showing that Russia can help other countries engaged in a conflict with Washington.

One should remember that officials in Washington predicated the success of sanctions based on the fact that other states have to decide what will be their partner of choice—the United States or Iran. Theoretically, the decision here is simple: whatever possible benefits of cooperation with Iran, they cannot substitute American markets, investments, services and partnerships with American companies. The majority of countries will definitely do everything to avoid confrontation with the United States. Even if they do not support the decision of the Trump administration to withdraw from JCPOA and do not like Washington’s unilateral actions, they do not have enough incentives to escalate conflict with the United States over Iran. The clearest example of this is France, Germany and other European countries. After more than six months of talking about possible mechanisms to continue economic cooperation with Iran, none was implemented or even created.

Russia is in a completely different position. All sanctions that the United States could impose on Russia without causing significant damage to the global economy are already been in place.

Most importantly, the bilateral economic cooperation between the United States and Russia is too limited for Moscow to be afraid to lose it. One can argue that the United States is basically pushing Iran to closer economic ties with Russia. This is happening during the final stage of the civil war in Syria, and discussions about the country’s future revealed that Moscow and Tehran are not always on the same page politically. With the return of sanctions, Iran has significant incentive to find compromises with Russia.

An intensified economic partnership between Tehran and Moscow becomes a testing ground for ideas on how to counter U.S. economic pressure. Other countries will watch carefully—some of them might find themselves on the receiving end of American pressure. The Trump administration, quite rationally, avoided a worst case confrontation scenario by approving sanctions waivers for the biggest buyers of Iranian oil and, sooner rather than later, Washington will have to decide on what to do with the waivers. If they are extended, the whole point of bringing Iran under economic pressure by stopping its oil export will be lost. Furthermore, considering the extension of waivers, the United States will have to solve new strategic dilemmas. The biggest among them being whether to use this waiver issue as leverage within its escalating showdown with China. If, at one point, the waiver for China expires, will the United States be able to block Iranian export to China completely?

In any case, if China, not to mention other countries, joined the Russian-Iranian cooperation allowing the Islamic Republic to relieve economic pressure, we will witness a serious attempt to build an international system aimed at collective defense against U.S. sanctions. This system might fail, but will unavoidably destabilize modern international relations.

The fact that Russia is uniquely capable of lowering the efficiency of U.S. sanctions against Iran illustrates that whatever decisionmakers in Washington think about Moscow, it is very difficult to ignore the biggest country on Earth. This is especially true now, when the United States experiences frictions with states routinely considered as U.S. allies. Excellent relations with some of them (France, Turkey and Saudi Arabia, to name a few) could help in enforcing the new sanctions against Iran even without Russian cooperation. But the current state of relationships between the United States and those allies is far from perfect. If the United States acts outside broad multilateral efforts, its needs cooperation with at least a few countries involved in a specific situation. In particular on Iran, Washington withdrew from the JCPOA; now, the Trump administration, while experiencing several regional crises around Iran, does not have an understanding with major actors which achieved JCPOA, which creates an opportunity for Russia—a significant geopolitical competitor—to counteract by raising stakes on other issues.

Time will show whether Russia takes full advantage of this opportunity. For Washington, an additional confrontation with Moscow, now on Iran sanctions, does not seem unavoidable. However, to prevent such confrontation the United States has to negotiate and to make deals with Russia. Considering the experience of the past several years, this kind of scenario does not look likely.