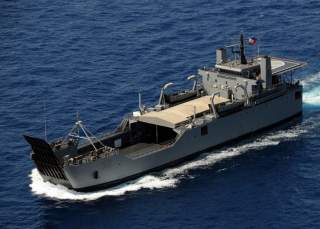 Former Philippine president Fidel Ramos was in Hong Kong earlier this month to meet his “old friends” in hopes of breaking ice with Beijing. In a statement issued Thursday, Ramos and his interlocutors, including prominent Chinese diplomat Fu Ying, said they discussed the way forward “in the spirit of universal brotherhood and sisterhood for peace and cooperation between the two countries.”

In the geopolitical equivalent of David versus Goliath, China was legally thrashed by the Philippines last month in an international arbitration over their disputes in the South China Sea. In the aftermath, both are showing desires to mend fences. The parties, however, will squander the opening if they keep circling around the tried-and-failed idea of joint development of energy.

Minutes after a tribunal under the Permanent Court of Arbitration ruled against a raft of Chinese maritime claims and activities, China issued a statement denouncing the Philippines, the tribunal and its ruling, but also said it was willing to “make every effort to reach transitional arrangements, including conducting joint development in relevant waters.”

Manila had already signaled interest. A few days before the tribunal ruled, Foreign Minister Perfecto Yasay said the Philippines wanted talks with Beijing to see how “we can utilize and benefit mutually from the utilization of the resources.”

First raised by Deng Xiaoping and repeated by subsequent Chinese leaders, joint development has become Beijing’s reflex response to its acrimonious maritime relations. Desperate for energy and incapable of developing it alone, Manila has long hung its hopes on Chinese partnership. The ruling may have rekindled the political will to collaborate, but has also legally snuffed out the prospect.

In a direct rebuke to the most controversial and sweeping component of China’s claims, the tribunal declared that “there was no legal basis for China to claim historic rights to resources within the sea areas falling within the ‘nine-dash line.’”

The line, also known as the U-shaped line or the cow’s tongue, swoops down from China’s coast to take in most of the South China Sea. It slices into the Exclusive Economic Zone (EEZ) claimed by the Philippines, as well as into those by Brunei, Indonesia, Malaysia and Vietnam. China has not specified the line’s coordinates, nor articulated exactly what it is claiming within it, but its actions—evicting other claimants’ oil and gas surveillance vessels and shielding Chinese fishermen from other coastal states’ law enforcement—suggest it asserts entitlement to natural resources within it.

The Tribunal also ruled that none of the land features in the Spratly chain, off the Philippine coast and a few hundred nautical miles from China, are legally “islands.” That means no country, China included, can legally claim an EEZ, which extends two hundred nautical miles outward and comes with exclusive rights to resources.

The ruling dramatically shrinks the scope of maritime zones that China can lawfully claim and leaves little chance that they overlap with the Philippine EEZ. The two sides are now hard-pressed to define a suitably disputed area with promising hydrocarbon prospects to collaborate in.

The Philippines’ Hunger for Energy

The Philippines may indeed be hungry enough for energy that it would consider trading off sovereign rights for Chinese capital, technology and freedom from harassment. The country imports more than 90 percent of its crude oil and petroleum products. Its only natural gas field is expected to run dry within the next fifteen years, while demand is projected to rise.

Manila has neither the funds nor the technical capacity to develop new energy sources in the South China Sea without foreign partnership. The only sizable commercial-grade natural gas reserves are on the Reed Bank, which Manila claims as part of its EEZ but which is within Beijing’s nine-dash line. International conglomerates have stayed away for fear of offending China.

Until the recent ruling, Manila’s only hope for developing the Reed Bank has been linking hands with China, and there has been no lack of effort. In 2003, the Philippines was short on options after failing to attract international investors to develop indigenous hydrocarbon resources. “We imported almost 99.9 per cent of crude oil and petroleum products. It was . . . the era of $100 per barrel of oil. We wanted indigenous oil but couldn’t explore ourselves in our backyard,” lamented Eduardo Manalac, then Philippine National Oil Company (PNOC) president and CEO and energy undersecretary.

Formerly a senior executive at Phillips Petroleum, Manalac had developed friendship with counterparts at China National Offshore Oil Corporation (CNOOC). “My instinct was, why can’t I ask these guys to help out with joint development? So I presented this to the [Philippine] president, and she enthusiastically approved.”

At the time, then president Gloria Macapagal Arroyo was presiding over a “golden age” of Sino-Philippine relations underwritten by generous Chinese infrastructure loans. During her 2004 state visit to Beijing, PNOC and CNOOC signed an agreement to collaborate on seismic surveys of the disputed waters. The agreement evaded sovereignty concerns by stating that it would “not undermine the basic position held by the Government of each Party on the South China Sea issue.”

The area covered by the bilateral agreement ended up overlapping with Vietnam’s claims. After six months of strong objection, Hanoi reluctantly joined the deal. The ambitious project covered an area of 143,000 square kilometers.

Under the tripartite agreement, CNOOC collected data that was processed in Vietnam and subsequently brought to the Philippines for interpretation. The parties performed their jobs dutifully and developed cordial working relations, and initial analysis turned up promising results for commercially recoverable deposits. They were, however, soon to encounter a debilitating backlash.

In late 2007, a Manila press conference was held to publicize the surveys. “It was then the media asked about the location of the area, and the controversy began,” said Guillermo Balce, then energy undersecretary. Though the size of the area had initially been made public, its location had remained confidential. Press articles, especially one in the Far Eastern Economic Review, revealed details of the deal, including its location. The author alleged the Philippines had “made breathtaking concessions in agreeing to the area for study,” and “about one-sixth of the entire area, closest to the Philippine coastline, is outside the claims by China and Vietnam.”

Around the same time, sentiment was turning against Arroyo and Chinese investments. The president and her husband were accused of corruption in a $329 million telecommunications deal with a Chinese company. Revelations about the joint exploration deal further energized her critics. Opposition lawmakers filed resolutions seeking probes into whether the administration had compromised sovereignty and sold out national territory for an $8 billion loan package. Some urged impeachment.

Opponents also challenged the project’s constitutionality. Under the Philippine constitution and the Oil and Gas Exploration and Development Act, Philippine entities must own at least 60 percent of the capital of a natural resource project in Philippines waters and the government must retain at least 60 percent of the net profit. Collectively, they are known as the 60/40 rule, which the tripartite agreement—with cost split evenly three ways—did not appear to meet. The Supreme Court was petitioned in May 2008 to nullify the agreement.

Besieged by legal challenges and political troubles, the Arroyo administration let the joint exploration agreement expire on July 1, 2008, despite China’s and Vietnam’s desire to renew.

Another attempt at Sino-Philippine cooperation also miscarried. In May 2012, Philex Petroleum—a private Philippine company and majority shareholder of Forum Energy—approached CNOOC and offered it an investor role in a block on the Reed Bank. CNOOC reportedly responded “positively,” yet ultimately declined, as its participation would have to follow the 60/40 rule and could be interpreted as recognizing Philippine sovereignty. Talks have continued on and off, most recently in July 2014, but without agreement.

Pro-business members of the Philippine Congress have introduced bills to loosen the 60/40 rule but failed to gain traction.

If Manila were to now propose joint development on the Reed Bank on Chinese terms—even split of ownership and profit—it would be conceding sovereign rights to an area that China has no legitimate claim to. President Rodrigo Duterte may be willing to fudge some of the issues, but such a deal would be politically perilous and legally vulnerable. Beijing could not sign off on a deal involving a Chinese company participating as a minority shareholder, because it would be seen as retreating from its own claim and risking nationalist rage.

It remains to be seen how Beijing might react were Manila to reopen blocks in the disputed waters for international bidding, but the prospect for China and the Philippines to jointly develop hydrocarbon resources in the South China Sea, for now at least, is dim. It is time to give up wishful thinking and base cooperation on reality.

The tribunal has left space and hope for the parties to share and jointly manage fisheries. Fish stocks may be less glamourous than hydrocarbons, but they are more strategically important from two perspectives: disagreements over fishing rights have led to most of the clashes in the area, and a collapse in stocks from overfishing would present an existential threat to many of the claimant governments—some 210 million people in the countries surrounding the South China Sea are estimated to depend on fishing and its associated industries for their food and livelihood.