Olympic Athletes Should Keep Politics Out of the Games 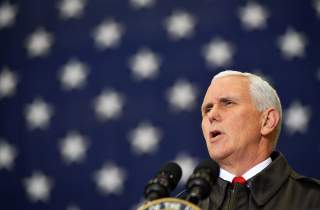 Mike Pence is back in America after leading the U.S. delegation to the Winter Olympics, where he stood up for the human rights of those oppressed by the North Korean regime—an important part of U.S. diplomacy. To listen to much of the media, however, his visit was a disaster. Pence wasn’t just attacked for refusing to make nice with the representatives of the North Korean regime, which, incidentally, much of the Western press fawned over. Two gay athletes on the U.S. Olympic Team attacked Pence as being anti-gay. One even told a British paper he wouldn’t go to the traditional White House welcome-home ceremony for the team.

It began last month, when Adam Rippon, a gay figure skater on the U.S. team, complained to USA Today that Pence was leading the delegation, remarking, “You mean Mike Pence, the same Mike Pence that funded gay conversion therapy? I’m not buying it.”

Going beyond his expertise at split twists and upright spins, Rippon also offered a psychological and religious assessment of the vice president: “I don’t think he has a real concept of reality. To stand by some of the things that Donald Trump has said and for Mike Pence to say he’s a devout Christian man is completely contradictory… I think he should really go to church.”

Of course Pence attends church regularly. But who lets facts get in the way when extra publicity is in the offing? The assertion that Pence supports gay-conversion therapy emerged on social media during the height of the 2016 campaign. As evidence, the attackers offered a line that appeared on Pence’s 2000 congressional campaign website, which supported federal funding for people “seeking to change their sexual behavior.” In context, it’s clear the obscure reference is in support of programs to reduce sexually transmitted infections, not to turn gays into straights.

Those who smear Pence also cite his support for religious freedom and past opposition to gay marriage—conveniently overlooking that Barack Obama, Joe Biden and Hillary Clinton all opposed gay marriage for just as long as it was politically opportune to do so. Unlike Clinton, Pence did not give an impassioned speech against gay marriage on the floor of the Senate.

What Pence did do was get elected alongside Donald Trump on a ticket that modernized the Republican Party in part by confronting real threats to American society like economic decay, political correctness and foreign adversaries. Trump himself waved a rainbow flag at a campaign rally and invited prominent gay Peter Thiel to talk at his nominating convention about economic recovery and his pride about being gay.

I myself saw this modernization first hand and benefitted from it personally. As a gay Republican who served on the Trump transition, which Pence led, and then as a political appointee in the Trump administration, I witnessed how much Trump appointees care about someone’s sexual orientation: precisely zero. I’ve studied Pence closely since I first met him as governor of Indiana, and am convinced that neither he nor his top aides harbor any animosity toward gays.

All of this is lost on the grievance-traffickers of the left, who don’t let facts get in the way of publicity—including the disgruntled figure skater.

Pence would have been justified in asking that Rippon be dropped from the U.S. Olympic Team. Instead, he did a very Christian thing, tweeting to Rippon: “I want you to know we are FOR YOU. Don’t let fake news distract you. I am proud of you and ALL OF OUR GREAT athletes and my only hope for you and all of #TeamUSA is to bring home the gold. Go get ‘em!”

To this magnanimous effort to change the subject from politics back to sports, Rippon joined gay freestyle skier Gus Kenworthy in an amorous pose on social media and churlishly taunted: “Eat your heart out, Pence. #TeamUSA TeamUSGay.” Kenworthy also tweeted, “We’re here. We’re queer. Get used to it,” a statement that would have been brave two decades ago. Today, it reeks of moral grandiosity.

Rippon complained to GQ that, “Being gay has never been a big deal to me, which is why it’s a little funny to be getting all this attention about it.” If that’s true, then he should fire his publicist. One can be forgiven for concluding being gay is actually a very big deal to Rippon—and, combined with a willingness to help the media attack Trump and Pence, his ticket to fifteen minutes of fame.

The problem is that the damage will last longer than that. Not only does this attack on Pence represent a bogus assault on someone because he is a leading conservative, but it also epitomizes the continued politicization of everything by the left in America. The purveyors of identity politics are desperate to take down Trump and Pence as the biggest obstacles to their obsession with abolishing meritocracy in America.

If the U.S. Olympic Committee doesn’t want to become identified with this effort and alienate half of America, then it owes Pence an apology for the conduct of two of its athletes. American athletes should put their country and their team ahead of politics.

Christian Whiton was a State Department senior advisor in the Donald Trump and George W. Bush administrations. He is a senior fellow at the Center for the National Interest and the author of “Smart Power: Between Diplomacy and War.”