Oman Must Isolate, Not Embrace, the Houthis 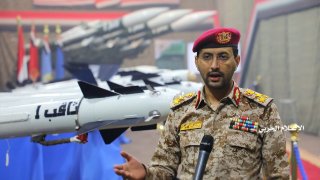 On January 17, the Houthi terrorist group launched a drone and missile strike from its base in Yemen against Abu Dhabi, the capital of the United Arab Emirates. Kamikaze drones hit the international airport and a nearby fuel depot, sparking a large fire. The attack killed two Indian citizens and a Pakistani, and injured several other workers.

The Biden administration last year delisted the Houthis as a Foreign Terrorist Organization citing questionable concerns that the designation could hamper the delivery of humanitarian aid. Calls to re-designate the group are fully justified. The Biden administration should go a step further, however, and demand that Oman dismantle the Houthi regional headquarters that currently operates with Washington’s blessing inside its borders. The office is home to senior Houthi leaders who have blood on their hands.

Oman views itself as the Switzerland of the Middle East. The country cites its neutrality and commitment to diplomacy as justification for hosting the Houthi headquarters. However, the Houthis have exploited their presence in Oman not only to legitimize their operations and to access the international financial system, but also to smuggle weapons into Yemen. In 2016, Iran reportedly smuggled anti-ship missiles, surface-to-surface short-range missiles, small arms, explosives, and unmanned aerial vehicles (UAVs) to Yemen, some of which apparently passed through Oman. In March 2017, Conflict Armament Research, a nongovernmental group, reported that the Houthis had smuggled UAVs used in Yemen through Oman. The following year, the United Nations reported that Oman was the “most likely” route through which Burkan-2H missiles reached Yemen.

Subsequent U.S. pressure led the Omanis to crack down on some illicit activity. However, for Saudi Arabia and other regional countries, Oman’s indulgence of the Houthis remains problematic. Rather than engaging in diplomacy, the ostensible justification for the Houthi presence in Oman, the Houthis continue to wage a campaign of regional terrorism. The number of Houthi terrorist attacks has spiked in the last year. In just the last two months, the Houthis have hijacked an Emirati-flagged ship off the Yemeni coast; overrun the U.S. Embassy in Sana’a, taking several Yemenis staff members hostage; and have taken two United Nations workers hostage.

The Omanis might once have justified their relationship with Mohammed Abdulsalam, the Houthi’s chief negotiator and a resident of Oman, in an effort to resolve the Yemeni civil war. However, the Houthi strikes on civilian targets in Saudi Arabia and now the United Arab Emirates put an end to that pretense. That Abdulsalam was in Tehran at the time of the attack suggests a level of coordination. To put it mildly, that is not a good look for Oman.

The ruling elite in Muscat may say that the Houthis are indigenous freedom fighters. While this was once a subject of debate, the Houthis have themselves helped to settle it. The group openly identifies as part of an “Axis of Resistance,” the Iran-led alliance that includes Lebanese Hezbollah, the Palestinian terrorist group Hamas, Iraqi militias, and Bashar al-Assad’s regime in Syria. Ali Shirazi, Supreme Leader Ali Khamenei’s representative to Qods Force, stated in January 2015, “The Houthis are a version of Hezbollah, and this group will use the stage for confronting the enemies of Islam.” It should come as no surprise that the missile, drone, and guidance technology used in the Abu Dhabi attack were made in Iran.

Sultan Qaboos, the late ruler of Oman, prided himself on moderation and mediation. During the first years of his rule, he faced a communist insurgency that he put down with Iranian assistance. Omani officials often cite Iran’s assistance during that Dhofar Rebellion to justify their cordial relationship with Iran today. But that was a different Iran, led by the secular Pahlavis. Today, Iran is a terrorist-supporting theocracy. The alliances of a bygone era in no way justify Oman’s support for a terrorist group that operates with impunity on its soil.

Qaboos died in 2020, paving the way for his successor Haitham, who is a careful pragmatist. It is unlikely that Haitham would expel the Houthis without direct coordination with the United States. Washington must now put a process in motion. It begins with a simple bureaucratic measure: the State Department must add the Houthis back onto its list of Foreign Terrorist Organizations. It serves as a recognition that the State Department’s 2021 decision to delist the group neither furthered a diplomatic solution nor facilitated provision of humanitarian assistance to Yemen. It would further mark the beginning of an international effort to isolate the Houthi leadership.

Of course, that effort should primarily include measures to isolate the Houthis’ patrons in Iran. But it must include pressure on Muscat to dismantle the Houthi headquarters. The Switzerland of the Middle East can still serve as a center for regional diplomacy. But even Switzerland does not offer safe haven to terrorists.

Jonathan Schanzer is senior vice president for research at the Foundation for Defense of Democracies.