One China, Many Trumps? 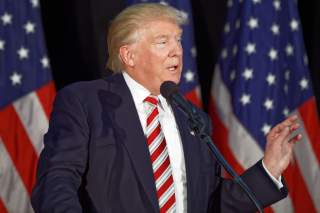 If we needed one word to describe President-elect Donald J. Trump’s policies on Taiwan and China over the past week, that word would be uncertainty. From a tradition-breaking telephone conversation with Taiwanese president Tsai Ing-wen earlier this month, to his claim that the United States should not necessarily be bound by its longstanding “one China” policy, to his suggestion that Taiwan could be used as a bargaining chip for trade negotiations with China, Trump has both angered and reassured at once.

This apparent inconsistency has encouraged the wildest speculation and renewed interest in the dynamics of the Taiwan Strait, leading some to conclude that a new era of opportunity for Taiwan, the isolated democracy claimed by China as part of its territory, is at hand, and others warning that Trump’s adventurism or inexperience could severely harm Taiwan’s interests by compelling Beijing to retaliate against it.

Reacting to Trump’s interview with Fox News on Sunday, in which he made his comments about “one China” and Taiwan as a possible bargaining chip, China’s hypernationalistic Global Times warned darkly, “If Trump gave up the One China policy, publicly supported Taiwan independence and wantonly sold weapons to Taiwan, China would have no grounds to partner with Washington on international affairs and contain forces hostile to the US.” It continued, “In response to Trump’s provocations, Beijing could offer support, even military assistance to US foes.”

Like other media worldwide, the Global Times was guilty of overinterpreting and overreacting to the incoming president’s remarks. Media were not alone, with China’s foreign ministry expressing “extreme concern.” For one thing, those who have been alarmed by the comments seem to forget that Trump will remain a private citizen until January 20, 2017, and that his comments are hardly a reflection of what President Trump will do—and will be able to do—once he enters the White House. At most, Trump is flying trial balloons, or is perhaps attempting to set a series of maximalist positions from which he intends to negotiate once he becomes president.

Notwithstanding the fact that Trump is a bit of a wild card in U.S. politics, we can nevertheless predict that not unlike his predecessors, he intends to be a successful president and will not engage in actions that risk undermining U.S. interests. Furthermore, although his transition team has been criticized for its lack of experience and “buddy” mentality, the establishment with which he will have to work as president—from government agencies to the corporate world—will form a powerful countervailing force against any sudden shift in U.S. policy lest this put the nation’s interests at risk. The civil service alone, agencies like the Department of Defense and the State Department, whose interests aren’t always aligned, will inevitably pressure President Trump to move from the extremes toward the center and thus favor continuity over uncertainty.

As Walter Isaacson and Evan Thomas observe in their book The Wise Men, “those who administer a policy often have more impact than those who conceive it.” Whatever he has in mind, President Trump will not be able to go it alone, and therefore the chances that Washington would officially recognize Taiwan and “wantonly” sell it weapons, as the Global Times suggests, are hugely unlikely—not because recognizing Taiwan as a sovereign nation doesn’t make sense morally, but because under present conditions, geopolitics and global economics will militate against any such move.

As with Truman, who sparked dismay “at the prospect of a failed haberdasher from Missouri becoming President at such a critical time” of high tensions between the United States and the Soviet Union, Trump ostensibly has “good instincts and [will] depend on the right people,” to again quote Isaacson and Thomas, paraphrasing Acheson.

Again operating under the assumption that Trump does intend to be a successful president, it is hard to imagine that he would take steps that are likely to cause serious instability in Asia, if not military hostilities in the Taiwan Strait, which the mothballing of “one China” and recognition of Taiwan would most certainly cause.

And yet, Trump’s comments on Sunday once again had the benefit of forcing us to question our assumptions about longstanding U.S. policy, as well as to think about the language that we use to describe it. Every time “one China” is reported on in the media, chances are that one outlet or another will misrepresent what that policy means, which in turn offers us an opportunity to provide a corrective and to educate both the public and various governments.

Trump was right to argue that China should not dictate how the United States interprets “one China,” or even whether it should abide by the idea. After all, the “one China” policy—Washington’s acknowledgement of Beijing’s position that there is only one China and that Taiwan is part of China—is Washington’s policy, not China’s, and therefore how it defines it and applies it in reality is for the United States to decide, not Beijing. The same holds for the many other governments who have a “one China” policy, which often uses terms such as “acknowledge” or “take note of” rather than explicitly state as their policy that Taiwan is part of China.

Although the Global Times argues that “one China” has been the cornerstone of stability and prosperity in China, I would argue that the ambiguity that lies at its core—the acknowledging of Beijing’s view—is what has achieved this by providing enough flexibility and face-saving for all sides. Whether Trump meant the complete abandonment of “one China” or a reminder, as I suspect, that the United States alone gets to determine its “one China” policy, remains to be seen and will become more apparent once Trump has entered the White House.

But one thing is certain: the likelihood that the United States will scuttle “one China” is next to nil, as such a policy goes against even what the more creative (and pro-Taiwan) of Trump’s advisers on Taiwan and China, people like John Bolton, have argued over the years. In Bolton’s case, his argument has been that dual recognition might be possible, albeit under a “one China” framework. The logic behind this is that there is nothing in the United States’ “one China” policy that prevents dual recognition. (Whether such an argument would be palatable to Beijing or Taipei is a different question altogether.)

One the opposite side, Trump’s remarks to the effect that he could use Taiwan as a bargaining chip over “a deal with China having to do with other things, including trade” have also sparked alarm in Taiwan, which as a smaller ally facing a revisionist power is incessantly wary of abandonment by the stronger security guarantor. Here, the same rule applies: Taipei should pay close attention to whom Trump appoints into his administration, and wait to see what actual policies are implemented once he has become part of the system, while reaching out to potential persons of influence to reinforce the message that Taiwan isn’t a means to an end and that it is an essential partner of the United States in the Asia-Pacific. Meanwhile, the Chinese side will equally do its utmost to convince incoming U.S. officials otherwise. By doing so, Trump may be forcing both sides to show their cards before he even enters office—not a bad position from which to negotiate.

Panic, hope, fear and anger are all premature emotions at this point, as are all attempts to prove linkage between “the call” and subsequent Chinese activities, including military maneuvers around Taiwan. For the most part, officials in Taipei and (rhetoric aside) Beijing have reacted to the many Trump iterations with poise and restraint, aware that rashness is likely to be counterproductive. They should be encouraged to continue in that direction. And if history is any indication, we can expect similar behavior from Trump and his close aides from January 20, when the forty-fifth president of the United States leaves Trump Tower and is finally confronted to the reality of governing a country.

J. Michael Cole is a Taipei-based Senior Non Resident Fellow at the China Policy Institute, University of Nottingham, UK, and a Research Associate at the French Center for Research on Contemporary China. He is the author of Convergence or Conflict in the Taiwan Strait, published by Routledge in September 2016.