One Year Later: Heroism and Horror at Afghanistan’s Abbey Gate 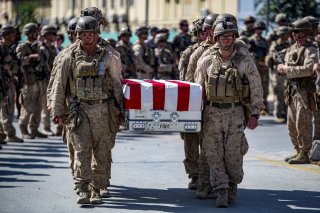 August 26, 2021—It was a brilliantly bright, nearly windless day in Kabul, Afghanistan, making it uncomfortably hot. Thousands of desperate Afghans thronged outside Abbey Gate, pleading for access to Hamid Karzai International Airport so they could flee the country. Marines, soldiers, and sailors sifted the crowd, looking for those with the “golden tickets” that would permit them onto the airfield for processing.

The work was taxing in every way possible. Physically—they had to establish some semblance of order among the dense crowd that teetered constantly on the verge of rioting, all while encumbered by 50-plus pounds of body armor, weaponry, and equipment. Psychologically and emotionally—these young marines had to deny access to pleading women, men, and children who feared for their lives under Taliban rule. Professionally—they were tasked with identifying and evacuating people under a constantly shifting set of criteria, within a rapidly closing window of time, in a tactical setting that couldn’t have been worse.

Worse still, U.S. forces had to rely on the Taliban for security beyond the immediate perimeter of the airfield. The Taliban!

And the whole, ugly, situation was created by an administration that seemed oblivious to the most basic principles of military operations when in close contact with the enemy.

That U.S. forces were able to evacuate 124,000 people in a mere two weeks under the most chaotic conditions speaks volumes about the professionalism, courage, and adaptability of the men and women involved. But this history-making accomplishment came at a terrific cost, one that should never have had to be paid.

At 5:36 that evening, an Islamist terrorist, freed from Parwan prison by the Taliban just days before and now working for the Islamic State, pushed his way through the crowd to arrive at Abbey Gate just minutes before it was scheduled to close for the night. Getting within 15 feet of the gate, he detonated his suicide vest containing 20 pounds of explosive. Hundreds of ball bearings shredded the crowd, killing an estimated 180 people. Among them were 13 U.S. servicemembers—eleven marines, a soldier, and a Navy corpsman, all but one of them in their early twenties. Hundreds more were wounded, including another forty-five U.S. servicemembers.

The airport was situated on the northeastern side of Kabul, close to an industrial zone and dilapidated residential area. It lacked any buffer zone useful for establishing security or even for spotting what might be coming at you. It had no space for handling the tens of thousands of people converging on the airfield to escape.

Only 26 miles to the north was the massive Bagram airbase. It had everything Hamid Karzai international did not: multiple runways, plentiful tarmac to handle a constant flow of aircraft, easier access for those streaming in from all parts of the country, ample facilities for personnel, equipment, maintenance, and refueling, and lots of beautiful, open, flat terrain perfect for establishing a layered security zone. Would it have meant a longer drive or a longer helicopter hop for personnel at the U.S. Embassy in Kabul and scattered around Kabul? Yes. But for the thousands of American citizens elsewhere across the country, who should have been the priority for evacuation rather than an afterthought, it would have meant everything.

But using Bagram as an evacuation base meant having enough people to work the site, something the Biden team made impossible with its cap on the number of troops allowed in country. Faced with such limits, Gen. Kenneth McKenzie, commander of U.S. Central Command, and his staff had no alternative but to collapse operations onto Kabul—despite its horrible disadvantages and risks. As it turned out, the administration had to deploy another 5,000 troops to Kabul anyway, as conditions spiraled downward in a matter of days.

President Joe Biden had hoped the rapid withdrawal of U.S. forces would let him declare a “win” for U.S. interests. Instead, it produced a debacle resulting in the abandonment of billions of dollars’ worth of military equipment and armaments, terrible losses in American and Afghan lives, and unmeasurable damage to America’s reputation.

Thirteen U.S. servicemembers gave their all at Abbey Gate. Relatively new to military service and, for most, on their very first deployment, they did as they were ordered, working together as a team from three services. They tried to impose order on disorder, to save as many people as possible under extreme conditions, to make emotionally draining “hard calls” that no young person should ever have to make. Placed in an impossible situation, they manifested the very best of American ideals.

The heroism and horror displayed at Abbey Gate can serve as a metaphor for the condition of our military today. It is profoundly too small for the tasks it is given. It works with equipment that should have been replaced years or decades ago. It receives too little funding for the training and readiness that are essential for success in combat. And it receives too little appreciation from an American public that generates too few youth able and willing to serve their country in uniform. In a sense, we are—at the strategic level—setting the stage for another Abbey Gate.

Despite all of this, our men and women in uniform continue to do remarkable things for the country, deploying into harm’s way, protecting our national interests and having each other’s back when the chips are really, really down. How can that not be inspiring to those with the obligation to ensure our military is supported accordingly?

The ultimate tragedy of those thirteen deaths on August 26, 2021, is that they needn’t have happened. But they did because of extraordinarily poor policies and decisions coming from the office of the commander-in-chief.

What good might be taken from the horror at Abbey Gate? That the service of those thirteen serves as an example for the rest of us about what it means to commit oneself to valorous duty and what can be accomplished in the most trying of circumstances.

It should also serve as a clarion call to those in the White House, the Pentagon, and Congress to appropriately resource, support, and employ our military men and women commensurate with the extraordinary things they are called upon to do. Anything less adds to the horror and mocks the heroism.

We can and should do better than that.

A 20-year veteran of the U.S. Marine Corps, Dakota Wood is The Heritage Foundation’s senior research fellow for defense programs.