Only America Can Keep a China-India War from Erupting 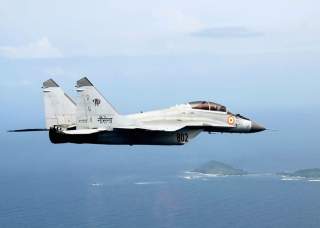 India and China are on a collision course. They boast the world’s two largest populations, two of the fastest growing economies on the globe and aspirations to lead the way into a new Asian century. The two nations’ fates will be intertwined for decades to come. Troublingly, China’s move last week to block Indian membership in the Nuclear Suppliers Group (NSG) is merely the latest sign of tension to emerge between the two Asian giants. Further competition and even confrontation await.

Competition between rising powers is hardly new or surprising. This particular case, however, shows China’s intent to remain the sole Asian power stretching from Siberia to the Arabian Sea. This was most recently demonstrated last week when China led the push to exclude India from the NSG. Membership in the prestigious group, which controls the trade of nuclear material and related technologies, would facilitate India’s nuclear power production. While legitimate concerns remain about India’s status as a nuclear state, Prime Minister Modi’s bid was backed by the United States, Britain, France and many others. These advocates could not overcome resistance spearheaded by the Chinese delegation, in a move that many Indians saw as purely political.

China’s NSG position could been seen as warranted given India’s failure to ratify the Treaty on the Non-Proliferation of Nuclear Weapons, but Beijing routinely blocks Delhi’s efforts to play a larger role on the international stage. India’s push for a permanent seat on the UN Security Council and China’s opposition to that move highlight this fact. Of the five current permanent members, only China has yet to offer even token support for the second-largest country in the world joining the exclusive group.

China and India have historically maintained relatively positive relations for such large, neighboring countries. The height of the Himalayas, and the long sea route between the two, have buffered most competition. Beijing’s foreign policy concerns have chiefly resided east and southeast of the country, while India has contented itself in dealing with immediate neighbors and holding fast to the nonalignment policy of the Cold War. The border war of 1962 notwithstanding, relations between the two countries have been relatively sanguine.

An increasingly powerful and adventurous China and a more engaged India now appear to be clashing on multiple fronts. Border issues linger still, and reports of Chinese troops crossing the Line of Actual Control surface regularly in Indian and Western media. While conflict is unlikely to break out, China has been updating and reinforcing its forces stationed in Tibet, and the disagreement serves as a foundation for other worries.

China’s steadfast support of Indian archrival Pakistan troubles leaders in Delhi. China is a major supplier of military equipment and expertise to India’s northwestern neighbor. Furthermore, cooperation with Islamabad figures prominently in Xi Jinping’s One Belt, One Road initiative, and the China-Pakistan Economic Corridor that will connect southwest China to the Pakistani port city of Gwadar is expected to pour tens of billions of dollars into Pakistan’s economy and boost economic output by as much as 2.5 percent. Pakistani relations with China are the most severe cause of India’s vexation with Chinese influence in the South Asia region; investment projects in Sri Lanka, Nepal and elsewhere have all drawn a watchful eye from India.

For China’s part, leaders in Beijing have closely watched as Prime Minister Narendra Modi has fought political inertia to create a more open and engaged India. Of particular concern to China are burgeoning friendships and even partnerships with Western powers and their Asian friends. The mid-June Malabar naval exercise with India, Japan and the United States demonstrates this new approach. In April, the U.S. Department of Defense and Indian Ministry of Defence announced the planned completion of the Logistics Exchange Memorandum of Agreement, which will allow for mutual logistical support and represents India’s largest departure from nonalignment. These efforts, combined with India’s engagement with ASEAN nations and Australia, further exacerbate Beijing’s feelings of encirclement and could further ramp up Sino-Indian tensions.

What has thus far been mostly diplomatic jockeying could soon become a more dynamic and dangerous competition in the Indian Ocean. The Chinese People’s Liberation Army Navy boasts increasingly capable systems and ambitious missions. Indian officials spot Chinese submarines near India’s Andaman and Nicobar Islands, and further into the Indian Ocean, roughly four times per quarter. These will likely increase, and be joined by surface patrols, as China seeks to build its “Maritime Silk Route” that will allow it to exert influence and protect a supply chain running from Africa and the Middle East through the Indian Ocean, into the South China Sea and up to its eastern ports. In response, the MoD has stepped up investment in maritime awareness and antisubmarine capabilities, leaning heavily on U.S. expertise and support. In the coming years, Indian surveillance flights might be intercepted by Chinese fighters scrambled from a PLAN aircraft carrier—not a reassuring development, based on U.S. experience.

The Indo-Pacific does not need to be a zero-sum game. The United States, India and democratic countries around the world believe that all countries can rise together—in both coordination and competition. At the Center for a New American Security’s recent annual conference, Secretary of Defense Ashton Carter stated, “[the] Asia-Pacific security network is not aimed at any particular country. The network’s not closed and excludes no one.” He also highlighted China’s participation in RIMPAC 2016 exercises, slated to begin Thursday in Hawaii.

The United States should continue extending such invitations, and conducting military exchanges and dialogues with countries across the region. It must also realize, however, that China may ultimately have no interest in the oft touted liberal, rules-based order, and that the tensions inherent with such a mindset will not be limited to the East and South China Seas.

McDaniel Wicker is currently an Asia Security Fellow at the Wilson Center. He previously served as an U.S. Air Force officer, largely in the Asia-Pacific.