Only Congress Stands Between Saudi Arabia and Nuclear Weapons 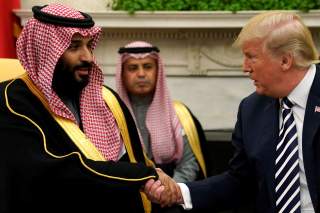 There is an eerie lull in the news about the proposed U.S.-Saudi nuclear agreement that Washington has talked about for months. Could it be that the administration no longer supports a sweetheart deal with its favorite crown prince? It seems too good to be true. Alas, it surely is. The lure of Saudi money is irresistible to the Trump White House and its nuclear camp followers, and they will be back. Congress must act now in anticipation if it is to stop an arrangement that would allow Crown Prince Mohammed bin Salman to outfit himself with everything he needs for a bomb. If Congress waits to see what lands on its table, then it will be too late.

If President Donald Trump presents a fully negotiated agreement text to Congress, then the only way Congress can reject it is by mustering a two-thirds vote of opposition in both houses, which in their current configuration is a near political impossibility. Altogether, the law, and Congress’s decades-old passivity in the face of Executive action, favor the president.

So why has Trump not done so already? It can only be because he has not been able to negotiate sufficiently advantageous terms. In truth, he doesn’t have much to work with other than the threat that Saudi security ultimately rests on American power. There is no longer an American vendor of nuclear power plants. Westinghouse, which is often spoken of in this context, has been Japanese-owned for years. Its managerial incompetence led to the collapse of one of the only two U.S. nuclear construction projects, and the near failure of the other. It went through bankruptcy and is now owned by a Canadian conglomerate (albeit one with financial ties to the Trump family). It is an altogether unattractive partner for an international construction project. The best it can realistically hope for is to piggy-back on a Saudi deal with a more solid vendor, the prime candidate being Korean.

But the president and his closest advisors are too heavily invested in the U.S.-Saudi connection to let the nuclear deal go. It not only has personal importance for Trump—recall the Kingdom was his first foreign destination—but he has advertised that its putative riches will create untold jobs in America, and it is also the capstone in the U.S.-Arab-Israeli front against Iran. If the Saudis want nuclear technology as part of the price, the president is not going to insist on encumbrances that would restrict what use they made of it. To make this work he has to find a way around the tiresome congressmen who keep on insisting that we shouldn’t encourage the spread of nuclear weapons, and the even more tiresome ones who bring up the unfortunate disappearance of a Washington Post columnist. Part of the strategy is to keep Congress in the dark.

A good example is the so-called Part 810 issue. To export equipment, the Nuclear Regulatory Commission would have to issue a license. It can only do that in the context of an agreement with the importer (in this case the Saudis) on cooperation on civil nuclear power, a so-called “123 agreement,” named for the section in the Atomic Energy Act that lays out the conditions for equipment exports. To export technology, that is, information, or to perform services, the exporter needs an approval from the Department of Energy (DOE), which is granted under Part 810 of its regulations.

It was uncovered recently that DOE had granted 810 approvals to seven firms seeking Saudi nuclear business. While such actions have always been public in the past, the Trump administration kept them secret, relying on the exemption in the regulation for proprietary information. DOE added a creative wrinkle: it claimed that not only were the contents of the 810 technology transfer proprietary, but the name of the exporter was also proprietary, which is a bit of a legal stretch.

Not only that, but DOE claimed even Congress couldn’t have access to the information. Here DOE has waded into illegal territory. The Atomic Energy Act (Section 123 e) instructs the Executive to keep Congress “fully and currently” informed of its activities. At one time, decades ago, this was a fearsome instruction, and nuclear officials testifying before Congress seriously worried whether they had complied with “fully and currently.” But in time, Congress ceded much of its power and congressional oversight went slack to the point that Congress got out of the habit of overseeing the Executive. In fact, it was a revelation to congressmen and their staffs that the law required the Executive to inform them what it was up to in areas covered by the Atomic Energy Act.

It must have been a shock to the Trump crowd, too, but it didn’t faze them much. They went into their modus operandi—dragging things out, giving a bit of information and insisting it could not be passed on, and so on, counting on Congress to lose interest. The public still does not know the names of the recipients of the seven 810 approvals, or what were the subjects of the approvals, information we are entitled to know.

If Congress has any self-respect, then it will not stand for this state-of-affairs. Since the Executive does not honor the traditional customs of political process, only legislation that spells out its obligations can right the balance. There are legislative proposals authored by Rep. Brad Sherman (D-CA) in the House and Sen. Ed Markey (D-MA) in the Senate to restore Congress’ rightful power to oversee civil nuclear cooperation and block it if fails to meet key nonproliferation standards.

Such legislation will have difficulty getting through the Senate as it is currently constituted, but the effort to do so is needed to publicize the Executive’s overreach and marshal public opinion. Congress will also have to work harder at understanding complex nuclear issues. A Saudi bomb could create havoc in the Middle East on a scale beyond anything yet contemplated. Stronger Congressional action is needed to prevent it.