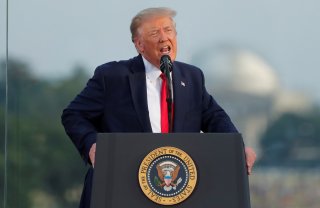 AMERICA IS undergoing what is suitably being described as the “omni-crisis.” It is simultaneously confronting what seems like an unceasing barrage of challenges that threaten not only its position on the world stage, but also its very domestic stability. These include: a very tense domestic political situation, overseen by possibly the most controversial president in recent history; a rising geopolitical rival in the form of China; a global pandemic, precipitating economically devastating lockdowns in urban areas and the deaths of over 110,00 Americans; nation-wide unrest, riots, and clashes caused by police brutality; and more.

Yet even before the coronavirus arrived, America was suffering. Its economy, long the envy of the world, has simply stopped working for a large swathe of the population. Real wages have either remained flat or fallen for everyone except the top ten percentile, leaving 43 percent of Americans working for $15 an hour or less. The median middle-class family has just about $4,000 in liquid assets, and would have trouble scraping up $400 in case of an emergency. All the while, living costs—including rent, education, and healthcare—have skyrocketed. In fact, over 10 percent of Americans have no healthcare, with many more remaining underinsured. America’s once-mighty middle class has gone from being first to thirty-second per capita among OECD countries.

All this transpired before the coronavirus hit. Since then, tens of millions of Americans have become unemployed, with millions of jobs likely lost permanently. The virus has exposed a brutal yet simple reality, which is that the United States is acting like a failing nation, passively allowing the degradation of critical institutions and its economy at the hands of an out-of-touch elite—one that seems incapable of realistically assessing challenges, adapting to rapidly-changing circumstances, and responding to threats.

The frustration over this sorry state of affairs is palpable. Look no further than the protests against police after the death of George Floyd, which in some cities curdled in rampant looting and rioting. This behavior isn’t just the result of popular anger against police misbehavior; it’s about everything. It’s the American people being fed up with, among other things, predatory business practices, growing poverty, massive debt, constant violence, and shrinking economic opportunity.

It is painfully clear there is a massive demand for serious social, government, and economic reform. What America needs is an economic reform agenda on the scale of the New Deal, backed by a professional consensus and a bipartisan coalition that is willing to put some political issues to the side in the interest of saving the country from going down a dangerous path. Not only that, but a renewed U.S. economy must be up to the task of being once again competitive on the world stage, especially as it braces itself for long-term great power competition with China.

This will require bold policymaking, rivaling that of changes achieved in previous crises in American history, along with innovative new ideas for economic reform. Three ideas in particular stand out as worthy of consideration: the addition of a new government department to coordinate domestic and international economic and trade policy; the creation of a public state bank system to provide credit for businesses and aspiring entrepreneurs across the country; and a reform of existing land zoning codes, which prevent U.S. cities from being utilized to their maximum extent while simultaneously depriving millions of the opportunity for a better life.

FIRST, IF the United States is to once again pursue global competitiveness, renew its own strategic industry capacity, and address domestic economic needs, then it is essential to devise a new mechanism that can better coordinate and elevate economic and trade policy. This means the creation of an entirely new federal department that can develop and execute a national economic strategy.

This is not a new idea in American policymaking. In 1983, the Reagan administration submitted a very detailed proposal to Congress for a “Department of International Trade and Industry” that would “consolidate the trade and industry functions of the Commerce Department with the Office of the United States Trade Representative.” The concept appeared again in 1992, when third-party presidential candidate Ross Perot argued that the United States “should study Japan’s Ministry of International Trade and Industry, which co-ordinates government and private-sector economic strategy for that country, and adapt such a model for America.” And as recently as 2012, the Obama administration demonstrated similar thinking when it proposed to merge the Department of Commerce, the Small Business Administration (SBA), the Office of the U.S. Trade Representative (USTR), the Export-Import Bank (EXIM), the Overseas Private Investment Corporation (now reformed and known as the U.S. International Development Finance Corporation, or DFC), and the U.S. Trade and Development Agency (USTDA). The resulting empowered Commerce Department would, in the White House’s words, “help entrepreneurs and businesses of all sizes grow, compete, and hire, leveraging one cohesive Department with one mission: to spur job creation and expand the U.S. economy.”

The idea for such a department was revived last year by professors Timothy Meyer and Ganesh Sitaraman at Vanderbilt Law School. In an article for American Affairs, they go further than all of the aforementioned proposals, calling for a “Department of Economic Growth and Security,” which would consolidate numerous offices, agencies, and programs that are currently either independent or located within existing government departments. These not only include the SBA, USTR, EXIM, DFC, and USTDA, but also the International Trade Administration, the Economic Development Administration, the Census Bureau, the National Institute for Standards and Technology, the Bureau of Industry and Security, the creation of a new Economic Security Agency, which “would combine the government’s fractured efforts at export controls, technology transfer, investment controls, and other economic security policies,” and more.

A new federal department focused on all of the above could achieve many things simultaneously: advance American trade interests abroad while, in Meyer and Sitaraman’s words, “addressing economic dislocations and economic security issues that arise from increased global economic interconnectedness” and disruptions; elevate the status of geoeconomic policymaking within the U.S. government; play a key informational function by gathering valuable economic intelligence that can be made available to Congress, the intelligence community, and the public; and reduce the harmful influence of “well-connected but unrepresentative industry interest groups” in policymaking.

Creating this new department will not be a simple task. Putting aside for a moment the formidable challenge of actually reorganizing a significant part of the federal bureaucracy, the sitting president will first have to call on Congress to reinstate the presidential authority necessary to do so. While there may be some partisan opposition to this, given the tumultuous state of American politics, both the necessity of this reform and its achievable benefits should serve as a bipartisan rallying point. Streamlining government to improve the effectiveness of U.S. trade policy while simultaneously making it easier for businesses, especially small ones, to find the help they need to expand and grow is a cause that everyone can get behind.

SECOND, INCREASING economic opportunity for ordinary Americans and addressing domestic inequality requires addressing the problem of concentrated financial power. “Big finance,” unfortunately, tends to be both predatory and speculative if unbound by rules and regulations, resulting in an unstable economic system. And at the moment, the industry is certainly concentrated: the top five institutions (JPMorgan, Bank of America, Wells Fargo, Citibank, and U.S. Bank) make up almost half (around 47 percent) of the total bank assets in the United States. It would behoove the nation if finance could be deconcentrated and credit made available to a wider range of small- and medium-sized businesses via a greater number of smaller, regional banks that are easier to regulate. Rather than taking up the challenge of breaking up the big banks, this task could also be accomplished via the creation of a system of public state banks.

Public banks are exactly what they sound like: financial institutions that are funded with taxpayer revenue and owned by and accountable to the government, serving as a viable alternative to private banks. At the moment, there exists only one instance of such in the United States: the Bank of North Dakota (BND). Created in 1919 with only $2 million, it was intended to serve as a way of protecting local farmers, businessmen, and other commercial concerns from the high interest rates and economic instability of the time. Over the past century though, the BND has proven to be something of an extraordinary success. The bank’s annual reports attest to this, with the 2018 report stating a profit of $159 million and a state return on investment of 18 percent. This funneling of funds to North Dakota’s state treasury has helped it avoid revenue shortfalls for years.

So how does this sort of bank work in practice, and how can it help decentralize American finance? The ongoing story of the Union State Bank—based in Hazen, North Dakota—and its relationship with the BND, as related by an in-depth report in YES! magazine, provides a helpful example. Though it is a small community bank with a bit over $130 million in deposits and $147 million in loans, investments, and other assets, Union State is able to punch above its weight. The bank “served as the lead local lender for a $30.5 million medical center that opened in 2016,” and also “helped finance manufactured housing for new workers attracted by the shale oil boom.”