Only Offensive Realism Can Contain China 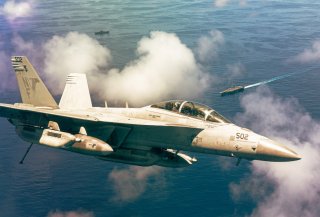 One of the very few areas of bipartisan consensus in American foreign policy these days is agreement on the need to contain China’s ambitious rise to regional, and potentially global, hegemony. The Biden administration’s newly released National Security Strategy (NSS) describes China as “the only competitor with both the intent to reshape the international order and, increasingly, the economic, diplomatic, military, and technological power to do it.” This judgment echoed the Trump administration’s NSS. Both presidents correctly adopted an offensive realist theoretical lens to diagnose the dynamics of great power competition between Washington and Beijing.

As offensive realists have long argued, great powers live in a tragic world dominated by a continuous struggle for regional and, ultimately, global hegemony. China’s recent military buildup in the South China Sea, as well as Russia’s invasion of Ukraine, only confirmed this time-honored, pessimistic view of world politics. However, the Biden administration’s prescriptions for containing China are largely inadequate because they are stuck in a liberal internationalist mindset that no longer fits the realities of our current realist world order. As he made clear in his recent meeting with Chinese leader Xi Jinping, President Joe Biden still holds out hope that the two superpowers can cooperate to tackle “common global problems” and compete in an orderly fashion in other areas, rather than finding themselves in the traditional state of intense geopolitical conflict.

The rhetorical commitment to contain China on the part of both Democrats and Republicans in Washington is worthless, even counterproductive, unless it’s accompanied by an overarching offensive realist grand strategy that shapes strategies and policies across military, economic, diplomatic, energy, and technological lines. Such a realist grand strategy to counter China’s hegemonic bid should be based on the following six principles.

The primary question any grand strategic theoretical framework must ask is: what is the main threat to a nation’s security and prosperity? In the case of the United States, the answer provided by the offensive realism paradigm is straightforward. The core threat to U.S. interests is the rise of another great power to the status of a regional hegemon, a coveted position solely enjoyed by the United States. As John Mearsheimer, the most influential offensive realist scholar, argued in his classic book The Tragedy of Great Power Politics, rising powers “almost always have revisionist intentions, and they will use force to alter the balance of power if they think it can be done at a reasonable price.” And while other short-term threats, such as international terrorism or nuclear proliferation, merit consideration as well, concerns over the balance of power nevertheless take precedence because, in the long-run, “great powers have the largest impact on what happens in international politics.”

The United States is not a global hegemon, but it is a peerless great power; no other country can claim dominance over its own region as Washington does. This is in no small measure because the United States was involved in thwarting attempts at regional hegemony by Nazi Germany, Imperial Japan, and the Soviet Union. Today, the only other great power with the economic and military strength to make a bid for regional hegemony is China. Therefore, the number one grand strategic priority for the United States is to make sure it continues to have no peer rivals by keeping China from gaining economic and military dominance over the Asia Pacific region. At the same time, the United States needs to shore up its regional hegemony in the Western Hemisphere by refocusing on the security, political, and economic problems of its own neighborhood, as well as on countering China and Russia’s encroachment in the region.

Geopolitics and Geoeconomics Over Ideology

An offensive realist strategy assumes that great powers strive for hegemony and act aggressively when it suits their interest regardless of their domestic politics and ideology. In today’s world, China and Russia’s revisionist ambitions are not driven primarily by their authoritarian leaders, but rather by systemic imperatives that would push them in an aggressive direction even if they were ruled by more democratic leaders. Balance of power considerations, rather than democratic values or ideological compatibility, should drive America’s anti-China coalition-building efforts to contain Beijing’s regional hegemonic ambitions. Less-than perfectly democratic non-Western allies like India, Vietnam, and the Philippines will need to be part of the U.S. partnership network, and Washington should be prepared to accept that democratic allies like Germany have their own realist and economic motivations not to join the United States in its anti-Beijing policies.

More generally, the United States should significantly downgrade the role of democracy promotion in its foreign policy. Despite what liberal or conservative internationalists believe, in the age of great power competition, such efforts to divide the world into “democratic” and “authoritarian” camps are not only unhelpful in terms of understanding the actions and allegiances of other powers. They are also counterproductive because they needlessly alienate many strategically important but traditionalist countries that don’t necessarily share the U.S. State Department’s most recent positions on human rights.

Military Superiority Over China Above All Else

In order for Washington to prevent its great power rivals from achieving regional hegemony and thus peer rival status, the Pentagon needs to be able to credibly deter them from undertaking aggressive military pursuits. The most fundamental implication of an offensive realist grand strategic paradigm for the Defense Department’s planning efforts is the prioritization of preparing for high-end, conventional conflict against another great power. If the United States is to deny China’s quest for regional hegemony, it needs to be able to deter and, if deterrence fails, defeat the People’s Liberation Army (PLA) in a military conflict in East Asia. That should be the number one priority for Pentagon defense planners, particularly given that Russia’s military limitations have been patently obvious during its botched invasion of Ukraine. Moscow’s inability to pursue hegemony over Eastern Europe should make it even easier for the United States to outsource European security to other NATO members in order to focus on the main priority, China’s PLA.

In recent years, the United States and China have been engaged in a quasi tech war. Xi is well aware of the stakes involved, saying, “Technological innovation has become the main battleground of the global playing field, and competition for tech dominance will grow unprecedentedly fierce.” The U.S. government and the business community will need to think about trade policy and technological innovation more from a realist competitive strategy perspective, as China does, and less from a liberal market efficiency approach. There are a number of avenues for Washington to “decouple” its economy from Beijing in a way that minimizes costs for U.S. consumers and businesses. First, the United States should redouble its efforts to increase domestic production of strategically important technologies such as microchips, semiconductors, and other dual-use components. Second, when production in the United States is not feasible, Washington needs to reimagine global supply chains in the model of “friend-shoring.” In order to eliminate Chinese companies from supply chains, the United States should strongly pressure global businesses involved in strategic industries to shift production to other low-cost countries, just as the apparel industry previously did for human rights concerns.

The energy sector is another key arena of geoeconomic competition in the era of great power competition. Oil and gas reserves have been used as geopolitical tools for decades, and the recent war in Ukraine only serves as a reminder of the intricate connections between energy security and grand strategy. Following what some have called “post-Ukraine climate realism,” the priorities of U.S. energy policy should shift away from the liberal internationalist concerns of the Green New Deal and toward the more traditional realist objective of securing energy resources for domestic consumption—and using those resources to advance geopolitical objectives. A realist energy strategy focuses on maximizing all resources of power, particularly strategic ones like oil and gas, and downplays the pursuit of liberal domestic priorities like the climate change agenda. While the United States and European countries could indulge in pursuing non-strategic goals like reducing carbon emissions during the unipolar era at relatively low geopolitical cost, such a distraction would be devastating to U.S. national security interests in today’s era of great power competition against China and Russia, two countries that continue to pursue energy policies reliant on fossil fuels.

Adapting to the era of great power competition has profound implications for American diplomacy, for Washington’s old and new alliances and partnerships, and, most critically, for the kind of world order that will emerge from the U.S.-China rivalry. For example, U.S. diplomacy toward Latin America, a neglected priority, needs to be elevated to a top priority in order to shore up the unique regional hegemonic position of the United States. At the same time, the much-ballyhooed “pivot to Asia” must not be derailed by events in Eastern Europe or the Middle East. Old alliances like NATO and new partnerships—like the AUKUS pact with Australia and the United Kingdom and the Quad dialogue with Japan, India, and Australia—need to similarly be shaped or reshaped to advance the overarching goal of containing China’s regional and global ambitions. To the extent that an international order emerges in the era of great power competition, the main tenets of this realist order will be centered around the U.S.-China geopolitical rivalry, Russia’s resurgence, and a narrowing of the policy space for multilateral cooperation through global institutions. Therefore, rather than trying to resuscitate the liberal world order, as the Biden administration is attempting, it is now time to shape the emerging realist world order to prevent the rise of a full-fledged peer rival to the United States. Washington’s task now is to shape (when possible) and adapt to (when necessary) the new emerging realist order.