The Only Way the Democrats Impeachment Gambit Can Hurt Donald Trump 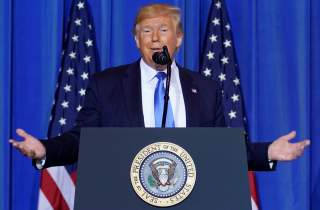 Donald J. Trump is a threat to U.S. national security and must be removed from office. At least, that’s what the Democrats will spend the coming months telling the American people. If they can succeed at painting the President in this light, then the Democrats’ bold impeachment gambit could pay handsome political dividends—even if it is unlikely to result in Trump’s removal from office. But everything hinges on winning this first and most important battle of all: the fight to control the narrative over what’s at stake.

Some Democrats have been calling for impeachment since President Trump’s first months in office. Since then, a steady trickle of opposition lawmakers have announced their support for impeachment—usually in connection with allegations arising from the Mueller report (e.g., obstruction of justice or conspiracy with a foreign power), but sometimes because of other “high crimes and misdemeanors” such has suspected violations of the Constitution’s emoluments clauses.

The idea of impeaching Trump is popular among Democratic voters, with a recent poll showing 73% of them favoring impeachment. But Republicans are resolutely opposed to the idea, with the country as a whole leaning mostly in favor of the Republican view. This stark polarization of opinion helps to explain why, for a long time, Speaker Nancy Pelosi and other leading Democrats were reluctant to open formal impeachment proceedings. Until now, their assessment has been that impeachment would have the net effect of rallying Republicans and moderate Americans to the President’s banner, making it that much harder to remove Trump at the ballot box in November 2020.

Yet Pelosi was unflinching when she announced impeachment proceedings just a few days ago. What explains the shift?

Part of the reason, perhaps, is that the Speaker could no longer hold back the growing number of Democratic legislators who are openly calling for impeachment. And to be sure, a savvy leader like Pelosi can be counted on to know when the gap between the leadership and the rank-and-file is becoming a political liability. Divided parties don’t easily win elections; party unity is a precious commodity in U.S. politics.

But another explanation is that the nature of these latest allegations against Trump—essentially, that the President conspired with Ukrainian officials to organize foreign interference in the U.S. electoral process, and that he withheld military aid to Ukraine in order to guarantee their compliance—were uniquely irresistible to Pelosi and her closest allies, providing the best possible chance of wounding Trump with an impeachment inquiry while exposing her party to minimal political fallout.

The key difference is that the current allegations facing President Trump can easily be framed as a national security issue and perhaps even an exigency, a problem that requires urgent remedy. In theory, military aid is only given when U.S. officials have concluded that such assistance will serve core U.S. security objectives. To withhold such aid for political reasons is therefore a serious transgression, one that places self-interest above the commonly understood national interests of the United States.

Security issues are different from regular political disagreements. So far, Trump’s team has succeeded at portraying all the previous accusations leveled against him as the latter: politically motivated attacks being waged by the Democrats and their allies in the federal bureaucracy. This has given voters permission to take one of two “sides” in an ongoing fight: either support the Democrats and other “deep state” conspirators or else defend the President against an unfair political witch hunt.

But there are no “sides” to be taken when the issue is a matter of national security. There is only one acceptable position for patriotic Americans to take: that which promises to defend the security of the United States. By accusing the President of placing the country’s national security at risk, Democrats are hoping to make it so that there is no tenable conclusion that voters can reach other than that Trump must be punished. Those who want to defend Trump will find themselves with an impossible row to hoe—or so the Democrats are hoping.

If the Democrats can remain united on the question of impeachment, they have every chance of succeeding in the House of Representatives. Of course, this does not mean that the Senate will convict; all indications are that Mitch McConnell and his colleagues will stand by their man. Unless party unity breaks down in some unexpected fashion, then, President Trump will probably still be on the ballot in November 2020.

This is why it is so important for the Democrats to win the contest over what’s at stake. President Trump cannot be allowed to frame his reelection bid as a fight against a corrupt and anti-democratic political establishment, which never accepted his election and has always sought to undermine him. He must, instead, be forced to run for reelection under the cloud of serious concerns about his suitability to safeguard national security. So too must Republican candidates for the House and Senate be forced to defend their support for a President accused of such gross malpractice.

Making impeachment about national security will not just saddle Trump and the Republicans with a heavy burden. It will also positively benefit Democrats. This will be especially important for the eventual nominee, whose flank will be protected against a President who might otherwise have wrapped himself in the mantle of militarism and sold himself as a hawkish defender of strict national interests. Down ballot, the specter of a national security exigency will benefit moderate Democrats who will have the opportunity to cast themselves as supporting impeachment with heavy hearts, not gleeful and vindictive political hacks but somber custodians of national safety.

Of course, the above scenario entirely hinges upon the Democrats successfully framing impeachment as a core issue of national security. This might not be a slam dunk. Some voters might be open to the suggestion that, in fact, what happens in Eastern Europe is far removed from U.S. national security; that even if President Trump did threaten to withhold military aid to Ukraine, it is a stretch to conclude that this placed American lives in danger.

Much will depend on how Republicans and their supporters in the news media choose to defend the President. Will they deny, justify, or deflect? After all, Trump’s supporters have managed to put out fires before. They might be able to do so again. It is also possible that new information will come to light that appears to exonerate Trump in the court of public opinion.

Another risk is that the Democrats will overreach by succumbing to the temptation to widen their impeachment inquiry beyond national security concerns. This would be a mistake. The narrative that Trump is corrupt, incompetent, reckless, and guilty of breaking domestic laws is nothing new—and so building a case for impeachment along these lines would probably backfire and leave the Democrats looking weak, narrowly partisan, and opportunistic.

For their impeachment gambit to pay off, the Democrats need to establish in the minds of the general public that the President has put the national security of the United States in jeopardy and that he might do it again. Only this allegation has the potential to transcend party politics and place an unbearable strain up Trump, the Republicans, and wavering voters.