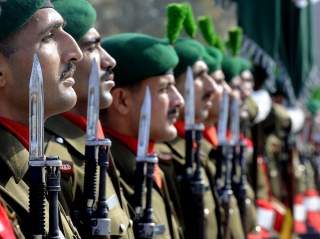 Terrorism in Pakistan is in decline for the second consecutive year. If current trend lines continue, the number of Pakistani civilians killed in terrorist attacks this year will be the lowest since 2006, a year before the Pakistani Taliban began a nationwide insurgent and terrorist campaign.

This precipitous drop is due to both Pakistani counterinsurgency operations being conducted in all seven tribal areas near Afghanistan, and urban counterterrorism operations in all four provinces—the most expansive of which is taking place in the megacity of Karachi.

While foreign observers of Pakistan remain fixated on North Waziristan, the major gains of the Pakistan Army and local police toward pacifying the complex urban environment of Karachi merit exploration.

The Karachi of old was cosmopolitan, peaceful, and clean. Into the 1960s, it represented the can-do spirit and aspirations of a young Pakistan, taking in Muslim migrants from India, who overcame the trauma and violence of partition with their forbearance, industriousness, and optimism.

The Karachi of today resembles Richard Norton’s “feral city”—a metropolis whose government “has lost the ability to maintain the rule of law within the city’s boundaries yet remains a functioning actor in the greater international system.”

Karachi has yet to fully match Norton’s dystopian nightmare, but since the 1980s, violence has become an integral part of the city’s political and social ecosystem. The capacity to intimidate and kill is an essential tool to attain or maintain political power and wealth.

Karachi’s challenges with urban violence are by no means unique. It has its equivalents in Delhi’s water tanker mafias, Mexico City’s kidnapping networks, and Mumbai’s infamous gangsters. But put together, Karachi’s violent dynamics may be among the world’s most complex.

Karachi is a city in which:

–  Ethnic, sectarian, and anti-state militants—generally two young men on a motorcycle—engage in daily targeted killings of their rivals and enemies. Some killers from these groups receive training and/or refuge in India, Iran, and South Africa.

–  Real estate mafias allied with or directly connected to the city’s top political parties usurp public land, which they sell or build housing developments on top of, to join in the real estate market that has been booming for most of the post-9/11 period.

–  Terrorist networks kidnap the wealthy and rob banks to fund their violence across Pakistan.

The latest surge in Karachi violence began in 2010 as the tenure of the municipal government, run by the Muttahida Qaumi Movement (MQM), expired. The MQM is Karachi’s largest party, representing Urdu-speaking migrants (Muhajirs) from India and their descendants. It dominates Karachi through a mix of genuine loyalty from Muhajirs, an efficient party cadre system, and brutal violence.

The MQM would have likely won the city’s next polls. And that is precisely why they did not take place.

Municipal elections are administered by the provincial government. And though the MQM was in a coalition with the Pakistan Peoples Party (PPP) at the center and in the Sindh province, where Karachi is located, the PPP had no interest in conducting local polls and devolving power to an MQM-run city government. The PPP preferred to rule Karachi—a city of 23 million people—through its own appointed bureaucrats.

The MQM-PPP coalition was a marriage arranged in Dubai by bureaucrats from London and Washington, who saw an alliance between “secular” parties in Pakistan as key to winning the war on terror. But all politics is local. And in Karachi, the battle between the MQM and PPP would grow as Al Qaeda and the Pakistani Taliban surged.

When the MQM governed Karachi between 2005 and 2010, there was hope that the party would transition away from violence. But the party rededicated itself to violence upon its exit from power. And it was motivated in part by changes in the city’s demographics.

Karachi’s population has more than doubled in the post-9/11 period. Pashtun migrants flooded into Karachi from Pakistan’s border regions with Afghanistan, fleeing conflict zones, joining several generations of Pashtun and Afghan migrants into the city. The Muhajir plurality was further diluted.

British authorities looked away as the MQM’s London-based exiled leadership incited and directed violence in Karachi and laundered funds from Pakistan into the United Kingdom. The MQM was seen as an effective partner in combating jihadism and a source for human intelligence in Karachi. But London’s permissiveness enabled the MQM’s violence in Pakistan.

From London, the MQM leader Altaf Hussain would deliver speeches via telephone broadcast on Pakistani news channels and to throngs of supporters in Karachi, often threatening violence or calling for a military coup.

British authorities began to take action against the MQM only after the party committed violence on British soil. In 2010, Imran Farooq, a defector from the MQM, was murdered. British authorities are investigating the role of Hussain and other MQM figures for involvement in the Farooq murder and money laundering.

Meanwhile, the coalition willed together by London and Washington would engage in a tit-for-tat gang war in the Karachi slum of Lyari—with gang leaders backed by the senior-most officials of both parties. The MQM would also clash with another coalition partner, the secular Pashtun nationalist Awami National Party (ANP).

And as Karachi’s three largest secular parties killed one another, the city’s death toll mounted as Al Qaeda, the Pakistani Taliban, and anti-Shia terrorists unleashed a terror campaign in Karachi killing thousands.

In 2010, there were 1,981 killings in Karachi, a marked rise from previous years. By 2013, that figure reached 3,251. Despite the severity of Karachi’s jihadist threat, most daily violence has revolved around the MQM and other major political parties—emanating from their cadres or sponsored militias. During this period, sectarian attacks would also come to form a sizable chunk of targeted killings.

The Pakistan Army Steps In

The Karachi Operation was launched in September 2013 as the death toll in Lyari and elsewhere in the city mounted. The operation was billed as a limited, targeted operation in Lyari, where PPP-backed gangsters had an upper-hand over MQM militants. The new ruling party at the center, the Pakistan Muslim League—Nawaz (PML-N), as well as the PPP and Karachi’s other top parties, backed the limited operation. But no parties were more enthusiastic about the operation than the MQM and ANP, whose senior officials called for an army takeover of the city.

In reality, however, none of Karachi’s major parties, save for Imran Khan’s Pakistan Tehreek-e Insaf (PTI), were keen on fully cleansing the city of its militant outfits. Their initial support of Karachi’s top political parties for the operation was mainly out of a desire to curry favor with the army, hoping that the military would target their party’s enemies and let their militants go scot free.

The breakdown of Karachi’s political order produced a status quo of increasing violence. Wealthy Karachiites fled to Dubai, Islamabad, or the west. The cost of business in a port city with more than 6,000 factories rose due to extortion. The common man lived in a state of fear, afraid of being shot by robbers for a mere cell phone. Gains from limited operations against militants in the city were fleeting. And the city’s major parties were unwilling to make sacrifices to reduce the city’s violence.

So the army had to continuously push the hand of an unwilling political class to expand the operations into a comprehensive, city-wide urban operation and sustain them. It had an ally in Chaudhry Nisar Ali Khan, the federal interior minister, whose own party has generally been reluctant to pursue military operations.

Periodically, the MQM’s Hussain or the PPP’s Zardari have protested against the operations or threatened the army, but the military leadership has generally hit back hard against their statements, forcing the parties to ease tensions.

In May 2015, Karachi Corps Commander Lt. Gen. Naveed Mukhtar—the city’s top army official—gave an address to an audience of influential Karachi residents. The speech was broadcast live on the country’s cable news channels, probably at the military’s insistence.

Mukhtar sounded like a cross between a social scientist and Police Commissioner Gordon of the Batman series. He systematically assessed the roots of Karachi’s woes, which he described as “a web of great challenges.” But he also declared that “business as usual” will no longer continue in the city. In a message to Karachi’s political class, criminals, and its beleaguered general population, Mukhtar said, “we will take this fight to its logical conclusion.”

Into its second year, the Karachi Operation has turned back the rising tide of violence in the city.