Opportunity in the Arctic: Defrosting Russia and America's Chilly Relationship 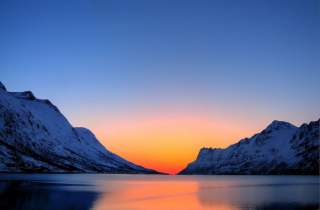 The United States just missed a major opportunity to continue working with Russia in the Arctic. During Putin’s trip to India last month for the annual India-Russia Summit, the Russian president and Indian prime minister signed a series of bilateral agreements that envision closer cooperation between India and Russia in terms of their defense and energy industries. Dubbed Druzhba-Dosti, these agreements aim to emphasize the close friendship between Russia and India, a very exciting prospect for the latter country. India’s foreign ministry was so excited about Druzhba-Dosti that they released a video entitled “Russia and India Friends Forever” to commemorate the event.

India’s clinginess aside, the United States should pay very close attention to the fact that India will be working with Russia to “explore joint development of technologies for processing rare earth materials” in the Russian Arctic. You may be thinking, “Big deal! Who cares about the Arctic besides Greenpeace, anyway?” Actually, it is a very big deal, as it not only sidesteps U.S. sanctions, but more importantly hurts future investment opportunities for American companies in a region that has in recent years seen some of the closest cooperation between Russia and the United States.

As a country that is stereotypically defined by its cold weather, Russia somewhat surprisingly lacks the technical expertise to drill the Arctic shelf. As a result, Russian oil companies often pursue joint-venture projects with foreign oil companies such as BP, Total, Shell, Statoil and ExxonMobil. The partnership between ExxonMobil and Rosneft has been particularly profitable with numerous joint projects, which have thus far been valued at approximately $3.6 billion with potential for future growth. In September, ExxonMobil and Rosneft made a major discovery of huge oil and natural-gas reserves after completing drilling on a well in the Kara Sea. However, in complying with the second round of sanctions enacted a few days before the discovery, Exxon put the $700 million project on hold and—for the time being—pulled out of the Russian Arctic.

Russia’s decision to turn to India for exploring joint development technologies is somewhat surprising, since Indian companies lack the expertise to drill in the Arctic Shelf in comparison to their American counterparts. India’s state-owned ONGC Videsh Ltd desperately approached Rosneft last year in hopes of receiving a stake in a joint venture project, but Rosneft was hesitant to accept, since ONGC Videsh Ltd admitted to lacking the technical expertise to drill in the Arctic. However, in October, Rosneft finally offered a 10 percent stake to an oilfield in Siberia—a desperate move, which Russia might regret later.

Initially, after Exxon withdrew from its Arctic project, Rosneft's CEO, Igor Sechin, was optimistic about its rapid return. He emphasized the importance of a long-term friendship with Russia’s American partners. But, with no end in sight to the current sanctions, a tanking economy and the threat of a third round of sanctions, Rosneft is starting to feel uneasy about waiting for Exxon. So it is considering alternative partners that can provide the technical expertise Rosneft needs to develop its Arctic wells. Distracted by its wish to contain Putin, the Obama administration is forgetting that Russia has close ties with alternative trade partners, namely China and India, which allows Moscow to maintain the political status quo in Ukraine without making significant concessions.

In signing the Druzhba-Dosti agreements, then, Russia is taking a firm step away from its American corporate partners. With more opportunities to work with India and China, Russia might be hesitant to seek out American business partners in the future, in order to safeguard Russian companies from potential sanctions that might force U.S. companies to pull out of joint projects unexpectedly. In comparison to American companies, Chinese and Indian companies now appear more lucrative for Moscow, since they present less of a political risk in light of the deteriorating relationship between the United States and Russia over the crisis in Ukraine.

Close ties with India are nothing new for Russia, and Putin has been consistent about maintaining this relationship over his tenure. What is new, however, is that this relationship has changed India’s role in the Arctic, which was previously depicted as solely research oriented. As a side note, although the Druzhba-Dosti agreements do not give India access to drill in the Arctic shelf for natural resources, this agreement serves as a stepping-stone for steadily increasing India’s presence, which could also cause future problems for the Arctic Council. An international consensus-building body on Arctic issues, the Arctic Council is cautious to let in new members, even ones with observer status such as India, because they might distract from priorities set by the core Arctic Council members (United States, Russia, Canada, Denmark, Norway, Finland, Iceland and Sweden).

While the Arctic might not seem like a priority for many Americans, it should not be overlooked as an important region for salvaging the U.S.-Russian relationship. For example, in the past, both countries worked closely together to conduct joint military-preparedness exercises such as Northern Eagle, but due to political tensions over the crisis in Ukraine, Northern Eagle was indefinitely suspended in 2014. Northern Eagle was significant for promoting cooperation between the United States, Russia and Norway because it served as an example that collaboration is not only possible, but also offers mutual benefits.

With a diminishing incentive to cooperate, Moscow might not see it as worthwhile to conduct future joint exercises and could become inclined to be more aggressive in its Arctic policy. Russia is already actively revamping its military presence in the Russian Arctic; meanwhile, it is failing to address more pressing problems such as the rapidly deteriorating infrastructure as a result of permafrost damage. Focused on containing Putin and his circle, the Obama administration is not considering the broader strategic implications the sanctions will have on the Arctic.

As the United States assumes Chairmanship of the Arctic Council in 2015, it has an opportunity to set the agenda and emphasize the importance of closer cooperation between Russian and American energy companies. But more importantly, as the Obama administration calculates its strategy to stop Russia’s involvement in Ukraine, it is important to weigh the costs that the current sanctions are having on American companies and the long-term damage that the sanctions will have on the trade relationship between Russia and the United States.

Katrina V. Negrouk is a Program Associate at the Center for the National Interest.