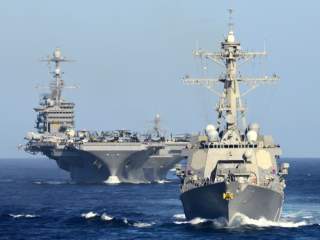 The Chinese deployment of SAMs and its island construction activities have often come as a surprise to local states, which are hard-pressed to monitor their own extensive maritime exclusive economic zones and thousands of miles of coastline. As the United States replaces its older P-3 Orion maritime patrol aircraft with more modern P-8 Poseidons, it should consider selling or transferring those aircraft to local states that could use their long-endurance capacity to monitor more of the oceans. Even more useful would be helping local states obtain basic satellites, so as to maintain persistent overhead observation capacity. Vietnam has contracted with Japan to acquire a radar satellite equipped with synthetic aperture radar. The U.S. should not allow ITAR (International Trade in Arms Regulations) to stand in the way of this sale.

The ITAR issue points to the larger issue, which is that a number of legal obstacles currently block closer relations. There remain limits on American interactions with Vietnam and Thailand, for example, due to their domestic political situations. The United States should stand by its principles, including the support of human rights. But it also should be able to support its strategic goals, including the preservation of regional stability in a key part of the world. The same logic that allowed waivers in dealing with Egypt and led to openings with Iran should be applied to U.S. allies such as Thailand and emerging partners such as Vietnam.

The fact that the United States suspended FONOPS for three years around the Spratly islands, even as China was building artificial islands at a blistering pace, is inexplicable. It is long past time for the United States to make FONOPs a far more routine part of operations—and to raise the general visibility of American forces—in the region. From harassing the USNS Impeccable and USNS Victorious to dangerous maneuvering that nearly led to a collision with the USS Cowpens, China’s actions demonstrate that they feel the Americans are interlopers. It is essential to make clear that the United States will nonetheless not be intimidated into ceding its rights or abandoning its allies.

China’s increasingly assertive posture has sparked few downside consequences. That needs to change. At a minimum, the U.S. should exclude the Chinese from the 2016 RIMPAC, where they would have ample opportunity to gather intelligence about not just the U.S. but key allies such as Australia and Japan. (In 2014, Beijing dispatched a spy ship to accompany their participating vessels—and then CINCPAC Commander Samuel Locklear welcomed it!) A more substantial move might be for the United States to adopt the same formula for the Philippine-held islands in the Spratlys as it has for the Senkakus. That is, while the United States should continue to assume no position regarding any of the various sovereignty claims, it could consider announcing that the U.S.-Philippines Mutual Defense Treaty would explicitly extend to any territories under the administrative control of the Philippines, as of a certain set date (say, January 1, 2015). This would make clear, on the one hand, that the U.S. was not going to help the Philippines extend its claims and, as importantly, was not liable to provide support for any Filipino adventurism. At the same time, it would also signal that any aggression against Philippine-held islands, such as Second Thomas Shoal, would raise the real potential of an American response. This would serve to deter aggression from any quarter, whether Vietnam, Malaysia, Taiwan or China.

What Is at Stake

The South China Sea is like a Rorschach inkblot test. For the Chinese, it is a matter of preserving territorial integrity and national sovereignty—core issues, as Chinese official Dai Bingguo once observed. It is also a matter of increasing strategic depth, keeping potential adversaries far away from China proper. For the various Southeast Asian states, it is also a matter of sovereignty: acceding to China’s claims would mean ceding vast tracts of territory, and all the attendant food and other resources. It would also mean reverting back to the tributary state relationship that dominated so much of China-Asia relations for millennia.

For the United States, it is a matter of both principle and power. It is a matter of enforcing international law and norms, including freedom of the seas and not allowing unilateral changes in how the rules are interpreted. At the same time, it is also a matter of power, demonstrating to friends and allies, but also to adversaries and third parties, American credibility—that American support is meaningful. This is not necessarily a matter of using force, but rather acting now, so that force can be avoided later.