With or Without Lula, Brazil Remains Brazil 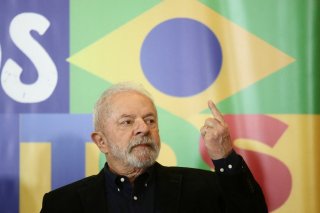 The fact that the United States has retreated from trade expansion efforts such as the Free Trade Area of the Americas may mean that there will be less friction with Brazil on regional integration. But we are likely to see a return to aggressive interest in promoting a multipolar world, with Brazil as one of the poles. This may include greater interest in highlighting the BRICs—despite Russia’s Ukrainian adventure and increasing friction between China and the West. A Lula administration may be supportive of the applications of Argentina and Iran to join the grouping (and thus gain access to an associated development bank).

Reviving UNASUR (which no longer functions) may be another initiative, especially with new leftist governments in Chile and Colombia. And U.S. concerns on human rights and democracy in Nicaragua and Venezuela are unlikely to get much support from Lula. A Lula-run Brazil may want to join the Community of Latin American and Caribbean States (CELAC), a relatively new organization which seemingly aims to supplant the OAS and which does not include the United States or Canada. Bolsonaro had chosen not to join CELAC.

But should he win, Lula will be facing a complicated domestic picture which will condition his foreign policy ambitions. Brazil, like other countries, will be dealing with the economic consequences of the Covid-19 pandemic. This will be aggravated by the fact that Bolsonaro, behind at the polls, has engaged in a pre-election burst of spending that would be painful to unwind. There are some signs that Lula will do what he has to in order to keep the economy stable, such as appointing an orthodox-minded finance minister. But all this may give rise to the common Latin American phenomenon that when a government has to move to the right on economics, it compensates by going to the left on foreign policy, including looking for ways to differentiate itself from the United States.

Brazil’s earlier ambitions were greatly helped by the boom it enjoyed during Lula’s presidency. But there is no guarantee that China, Brazil’s top customer, will ever return to the remarkable growth levels it once had. Thus, with less cash on hand, Brazil’s efforts at global projection may have to be curtailed. Finding money for more embassies and development assistance programs to win friends abroad will be hard, as will using the state development bank to promote Brazilian exports and investment abroad. All of this may mean that it will be difficult to recover that intangible feeling among other nations that Brazil is on the way up and that their interest lies in associating themselves with this emerging world power.

Hope may arise in Washington that a new administration in Brasilia would mean a new opportunity, and that our two huge nations could do great things together. But while Lula is a convinced democrat (the same cannot be said for Bolsonaro) and his economic management is not likely to drive his country off a cliff, his view of the world is quite different from that of the United States.

Some of this is classic Latin American leftism and attendant anti-American sentiment. But a big part of it is the longstanding Brazilian view that a great place in the world awaits it, and that if it cannot get to this place by the sheer size of its population and economy, it can hasten the day by clever diplomacy, which will often include acting at cross-purposes to the United States. With or without Lula, Brazil remains Brazil.

Richard M. Sanders is a Global Fellow of the Woodrow Wilson International Center for Scholars. Formerly a member of the Senior Foreign Service of the U.S. Department of State, he served as the Director of the Office of Brazilian and Southern Cone Affairs from 2013 to 2016.