In Order for Afghanistan to Succeed, America Must Let it Decentralize 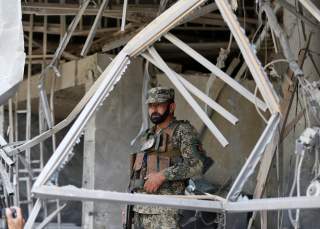 After spending half a year reviewing America’s Afghan strategy, The Trump administration ended up with nearly the same limited re-intervention plan promoted by the out-going Obama administration. The policy seeks to bolster the Afghan National Army to prevent the insurgency from winning, make another push for good governance to enhance political stability in Kabul and then to reconcile with the Taliban from a position of strength. President Trump’s approach will succeed if it confronts the reasons for the political disorder in Kabul, something Presidents Obama and Bush failed to do.

The reason the Trump administration has to send more troops to Afghanistan is that the Obama administration erroneously believed that it could use the Afghan presidential elections of 2014 to re-establish political legitimacy and a reliable partner in Kabul. Corruption, dysfunction and the political decay of Hamid Karzai’s presidency—promoted by the Bush administration—had strengthened the Taliban insurgency.

The Obama administration believed, as the Bush administration before, that only a strong and legitimate central government and a powerful president could facilitate political stability and economic growth, contain Afghanistan’s fractious ethnonational identities, weaken the Taliban, and enable the Afghan government to stand on its own feet.

Instead, the 2014 Afghan presidential election heightened ethnic tensions and brought the country to the brink of civil war, avoided only by an American brokered extra-constitutional power-sharing agreement. Many Afghans supported the new arrangement believing it was the beginning of a broader, more equitable, decentralized and inclusive political system. The key element of the agreement, aside from establishing a Chief Executive, was a constitutional Loya Jirga within two years to amend the constitution.

However, soon after, President Ashraf Ghani, an ethnic Pashtun, and the Obama administration ignored the agreement’s provision for constitutional reform, believing a more inclusive and decentralized Afghan government, i.e., more Tajiks, Uzbeks, and Hazaras (non-Pashtuns) would be ineffective and unstable. The Obama administration returned to the strong leader, highly centralized government mantra that has consistently underscored U.S. policy in Afghanistan. The non-Pashtun communities, though, saw it as the United States favoring Pashtuns and betraying a new hope for their communities.

Instead, with Obama administration’s support, Ghani began negotiations with the Taliban (who are Pashtun). The Obama administration believed negotiations with the Taliban would accelerate its departure from the country and strengthen the Afghan central government. Ghani thought he could consolidate power and weaken his non-Pashtun partners by bringing the Taliban into his cabinet. Ghani’s Taliban negotiations significantly damaged the multi-ethnic coalition essential for governing the country, benefitting only the Taliban who drew out the negotiations while simultaneously building up their military strength and increasing the number of fighters in non-Pashtun areas. The Taliban then launched attacks in the non-Pashtun regions further pressuring Ghani’s coalition partners and sowing discord in his government and chaos in the country.

Unable to obtain constitutional reform, to influence negotiations with the Taliban, or to halt attacks on their regions, Ghani's non-Pashtun partners and allies found themselves weakened, their communities vulnerable. With the exception of a group of Afghan special forces that sustained terrible casualties, the Afghan National Army, in which donors had spent billions, proved incapable of defending against Taliban attacks. Moreover, non-Pashtun local militias seeking to combat the Taliban and the Islamic State in their areas received little or no support from Kabul or the United States because it undermined the strong central government narrative so embedded in U.S. policy.

President Trump in his August 2017 Afghanistan speech rightly indicated that his administration would avoid nation-building and focus on fighting terrorists; however, to do this, his policy must challenge the notion that concentrating power in the hands of the Afghan president is the best way to achieve effective results in the country. The belief that good governance is the answer to growing ethnonational community consolidation and its challenge to an obsolete and unsustainable political system in Afghanistan trapped both Obama and Bush in an endless commitment of troops to prevent the collapse of the Afghan government.

For nearly fifty years, a period that includes growing extremism and long intervals of foreign occupation, Afghan leaders and their external backers have assumed that no Afghan government could be both reliable and truly inclusive. Afghanistan’s Pashtun leaders have consistently argued that the only way to manage the country’s diverse ethnic and tribal communities is through the firm hand of a strong leader. This assumption is not only wrong but is the main reason for continued instability, constant political disarray in Kabul, and the return of the Taliban.

This old narrative has overlooked the growing consolidation and power of the country’s non-Pashtun ethnonational and tribal communities. No community, tribe or ethnic group in Afghanistan constitutes a majority, and decades of distrust and conflict make a centralized political system unworkable because it has been used to ignore, constrain or repress Afghanistan’s diverse communities. Today, in Afghanistan a centralized political system only intensifies the competition for power and increases the cost of holding the country together. It feeds a descending spiral of political instability, ethnic conflict, extremism and ultimately fragmentation, and thereby sustains the Taliban and their supporters.

The main reason for the rise of the Taliban was to impede and destroy the growing power of Afghanistan’s non-Pashtun communities. Empowering non-Pashtun communities by supporting a more decentralized, equitable and inclusive government undermines the Taliban, who seek to use control of the government to impose their extremist Pashtun religious and nationalist agenda on the nation. The more power is devolved, the more Afghanistan’s ethnic communities are strengthened, the more powerful the internal alliance against the Taliban become. U.S. policy over the past decade and a half has made Afghanistan more vulnerable to extremism because it supported a political system that amplified an inter-ethnic and regional struggle for power and rejected the possibility of a broad internal Afghan alliance against Taliban in favor of convenient and efficient decision-making in Kabul.

If the Trump administration wants to end the war in Afghanistan, then the non-Pashtun ethnonational and tribal communities must be allies in the fight against extremism. Constitutional reform that makes the government more decentralized and inclusive is the best way to achieve this broad Afghan Alliance against extremism. An Afghan government that doesn't take account of the country's ethnonational diversity will always face potentially violent threats to its authority and require more foreign money and troops. A political system that empowers Afghanistan’s diverse communities is the greatest remedy to extremism because it establishes insurmountable barriers to Taliban consolidation and control of the country and without this possibility the reason for the Taliban evaporates.

Focusing on negotiations with the Taliban before concluding constitutional reform is a grave mistake as it will signal to no less than 60 percent of the country that is not Pashtun that their rights and security are less important than cutting a deal with the Taliban who are trying to eradicate their identity. The Ghani government undermined its legitimacy and lost significant territory by pursuing this approach. The Taliban should be allowed to participate in the election of the constitutional Loya Jirga, but no further negotiation with their leaders should occur until the enactment of constitutional reform.

A constitutional Loya Jirga would not be a panacea, not least because there would inevitably be disagreement about the type of constitution Afghanistan needs. But once established, an inclusive and decentralized constitutional power-sharing system would bring security to the country's various regions and communities while reflecting their respective identities and aspirations. Trust among those communities would then develop and a government would emerge that valued Afghanistan's diversity rather than fought it. Afghan leaders, politicians, and power-brokers would, in turn, devote more time to their communities and less to a violent and expensive struggle for power in Kabul.

There should be no repetition of the foreign interference in the constitutional Loya Jirga that occurred in December 2003 and January 2004. This time the Afghans would have to reach agreement on their own. If they could not agree, they would have to take responsibility for that failure and accept that there would be no attempt to bail them out. Afghans must solve their problems, and they know better than any outsider how to manage their diversity. However, the international community should make it clear that it would continue to support those communities that resisted Islamic extremism and sought peaceful and moderate expressions of their Islamic faith and ethnonational identities.

The Soviet Union in the 1980s and the United States after the 2001 Afghan Bonn Conference both assumed that they could counter Afghanistan's Islamic extremism by establishing a robust and efficient central authority that could take control of the country and defeat internal enemies. They never understood that such an approach would make the situation worse because it ignored the importance of Afghanistan’s ethnonational identities. Even after the U.S. military successfully adopted an inclusive approach in 2001, exploiting Afghanistan's diversity to defeat the Taliban and Al Qaeda quickly, the West returned to the same old thinking that doomed the Soviet involvement and continues to condemn the United States to endless war. Previous U.S. administrations ignored the reality of Afghanistan, and their plans failed. Foreign troops can buy time but will never end the war in Afghanistan. The new American strategy for Afghanistan should understand this and learn from past mistakes.