Orlando Was Not an Act of Hate. It Was an Act of War. 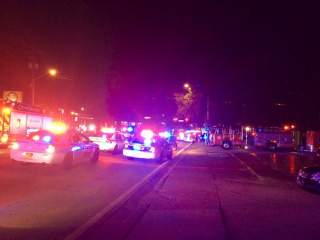 President Barack Obama responded quickly and forcefully to the horrific mass-casualty attack at a gay nightclub in Orlando early Sunday morning, condemning it later that day as “an act of terror and an act of hate.” And his eloquent reminder that attacks on any American, “regardless of race, ethnicity, religion or sexual orientation,” is an attack “on all of us” of course echoed the most basic truism about what defines Americans as a people.

But perhaps more important than what the president said, is what he still will not say. And it is these omissions that serve as a stark reminder that his administration remains unable or unwilling to speak openly and honestly about the nature of the threat posed by the militant Islamist movements that have grown in strength and number during his time in office. Worst of all, this lack of candor is clearly impacting our ability to effectively fight Islamic terrorism.

First and foremost, the Orlando attack was not an “act of hate”—it was an act of war. Yes, the attacker, a Muslim American named Omar Mateen, specifically targeted America’s gay community. But to make that a prime focus of attention exposes a key blind spot for this administration (and for the West in general) regarding the militant Sunni (Salafist) ideology that underpins today’s jihadi movements.

For nearly a century, these movements—from the Muslim Brotherhood in Egypt, to Jamaat-e-Islami in South Asia, to Al Qaeda and the Islamic State (ISIS)—have been unabashedly at war against not only the West’s undue influence in the Arab and Muslim world, but against Western liberal philosophy in general, specifically the West’s open and tolerant way of life. Yet the manner in which Western leaders often choose to characterize the violence perpetrated on behalf of such movements says much about their own Western preferences and biases.

Consider the statement made by Secretary of State John Kerry following last November’s ISIS-inspired attacks in Paris against street cafes and a music venue, which killed 130 and injured hundreds more. Kerry described the violence as “absolutely indiscriminate,” because it “wasn’t to aggrieve one particular sense of wrong.” This, he surmised, made it different from the Al Qaeda–directed massacre earlier in the year against the Paris satirical magazine Charlie Hebdo, which was famous for mocking Islam (among many other things); and which he said at least offered the attackers a “rationale” because it was something that made them “really angry.”

In fact, to militant Islamists there is no difference between a magazine exercising the right of religious satire and women sitting with men in a Paris café drinking wine, or young people dancing at a rock concert. Just like there is no difference between a gay nightclub that exemplifies liberal tolerance and a World Trade Center that represents global capitalism. They are all equal targets in a war against American and Western global power and liberal ideology.

Secondly, in the aftermath of the Orlando attack, President Obama again doubled-down on his reluctance to simply describe the threat for what it is, out of fear it will spark a backlash against Muslim communities. While this is certainly understandable, particularly in the age of Trump, it is ultimately counterproductive. The vast majority of Muslims worldwide—and especially in the United States—are both moderate and also well aware there are longstanding militant strains within their religion that, unfortunately, have been growing in power and appeal.

But instead of calling it out by name—which would strengthen, rather than weaken America’s partnership with the moderate Muslim world—Obama continues to fall back on vacuous descriptions of the threat, as he did on Monday following an FBI briefing. Despite the fact that Mateen had declared his allegiance to ISIS during the rampage, and that Obama himself called it an “act of terror,” as to the attacker’s motivation the president would say only that it “appears that the shooter was inspired by various extremist information.” That would be like saying on December 7, 1941 that Pearl Harbor was attacked by “violent people.”

Obama eventually acknowledged what everyone already knew—that Mateen dedicated the attack to ISIS—but he again tried to downplay its meaning, saying it was merely done “at the last minute,” and that Mateen was part of no “larger plot.” In fact, ISIS online recruiters specifically instruct would-be foot soldiers to not declare their allegiance until the moment of attack (as also seen in the San Bernardino case), to reduce the possibility of preattack detection. And the “larger plot” is the ideology of ISIS, Al Qaeda, and all the other militant Islamist groups dedicated to a global war against apostates in Muslim lands and infidels in the West.

Finally, while some may take comfort that Mateen seemed to have multiple personal triggers pointing him toward radicalization and violence—that is actually the most dangerous part of the story: the more powerful (and seemingly “successful”) the Islamist ideology being spun and promoted by ISIS and like-minded groups, the greater the numbers (and diversity) of the recruits it will be able to net across countries and communities, including inside the United States.

The Obama administration continues to insist that any references to warfare, or to the link between Islamic radicalism and today’s escalating terrorist threats, simply plays into the hands of the terrorists, by making it appear that “we are at war with an entire religion.” But this is actually quite odd coming from a president who has used the most aggressive wartime powers imaginable—such as hundreds of covert drone strikes inside at least eight sovereign countries—killing many thousands of suspected Muslim radicals (along with hundreds of innocent Muslim civilians).

More important, however, is that the strategy of perennially downplaying the threat, or of saying one thing and doing another, is clearly not working. President Obama’s own director of national intelligence, James Clapper, recently testified that Sunni militant movements now have “more groups, members, and safe havens than at any point in history,” and that radical Islamist networks are currently operating in at least forty countries worldwide. The United States, he said, now faces “the highest threat level since the 9/11 attacks” (and that was prior to the Orlando attack).

What has developed over the past five years is a gathering perfect storm of vast swaths of ungoverned jihadi territory across the Middle East, Africa and Central Asia; tens of thousands of local and foreign fighters being physically trained in jihadi training camps; untold numbers more being inspired and potentially recruited as foot soldiers over social media; and a high-profile strategy by ISIS and other groups to specifically target the West in order to spark a direct military confrontation—with many of the groups openly competing to see which can carry out the biggest and boldest attack that serves as a “tipping point.”

Simply admitting that these radical Islamist movements are “at war” against the United States and the West will not solve the problem. Nor will it mean that our responses must be mostly on the military side of the spectrum—indeed soft power, like bridge-building with the moderate Muslim world, and heavy reliance on civilian criminal-justice systems, remains integral.

But it may help us finally recognize that even the best proposals aimed at “preventing attacks” inside the United States—like beefing-up overseas and domestic intelligence, or granting the FBI greater tools to track and detain suspected lone wolves—are merely Band-Aid solutions unless we directly target and ultimately destroy the most capable jihadi groups and the militant Islamist ideology that serves as their inspiration.

President Obama likes to point out that groups such as Al Qaeda and ISIS pose no “existential threat” to America. But, as shown in Orlando this week, if left to fester and grow, they do pose a direct threat to America’s sense of freedom and way of life. The big question is: what is the “tipping point” for such attacks, and what would the next day look like? It is up to the American president to make sure we never find out.

Stuart Gottlieb teaches U.S. Foreign Policy, Counterterrorism, and International Security at Columbia University’s School of International and Public Affairs (SIPA), where he is also a member of the Saltzman Institute of War & Peace Studies. He formerly served as a foreign policy adviser and speechwriter in the U.S. Senate (1999–2003).