Ousting the Middle Kingdom from Zion: A U.S. Strategy toward Chinese Influence in Israel 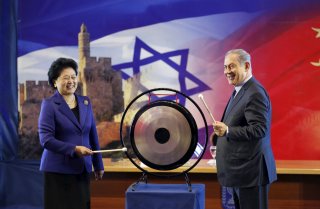 IN MAY 2020, Secretary of State Mike Pompeo went to Jerusalem for several hours’ worth of meetings with Israeli national security officials. Ordinarily, a trip to Israel by America’s top diplomat wouldn’t be particularly noteworthy. But this time, the fact that amid the coronavirus pandemic Pompeo flew so far to spend less than one day in Israel showed something was amiss in U.S.-Israel relations. That something was China. During a press conference with then-Prime Minister Benjamin Netanyahu, Pompeo all but named Beijing in slamming non-democratic nations that “obfuscate and hide information.” Israel took the hint: tread carefully with the Chinese.

Growing Sino-Israeli ties had troubled American policymakers for some time before Pompeo’s visit. The United States watched as its Asian rival traded more and more with Israel and pumped investments into the country. According to the World Bank, in 2018 China-Israel trade totaled approximately $15 billion, and Israeli exports from China were valued slightly higher than Israeli exports from America. While Jerusalem and Beijing drew closer, Washington worried that its relationship with its Middle Eastern friend could be a casualty. As the U.S. government has reached a consensus that the People’s Republic of China (PRC) is America’s top national security challenge, it has concomitantly evaluated its bilateral relationships through a China lens. Chinese investment in Israel has given American officials grievances that the Trump administration voiced with regularity. Behind those grievances was concern about longstanding defense ties between Washington and Jerusalem. Should the Chinese Communist Party (CCP) buy Israeli ports, build Israeli 5G networks, and secure an even larger economic footprint in the country, America might be forced to rethink its entire security relationship with Israel. Although Jerusalem appears to have gotten Washington’s message, the China variable will strain bilateral ties for the foreseeable future.

This predicament calls for a clear statement of American strategy. A few papers aside, there has been little analysis of what the United States should do—and how it should do it—as regards Chinese influence in Israel. Yet the United States has a deep interest in stopping Israel from falling any further into the PRC’s orbit. Doing so requires mobilizing non-military tools of diplomacy, including some coercive ones, to bring Israel around to the U.S. position. China has become the issue in U.S.-Israel relations—and American policymakers should treat it as such.

AMERICAN FOREIGN policymakers have long seen Israel’s security as important to that of their country—and rightly so. During the Cold War, Israel aligned itself with the U.S.-led order while nearby Middle Eastern states joined the Soviet sphere. Having an anti-communist bulwark in that volatile region was a boon to the United States. This was also true throughout the War on Terror, as Israel played a key role in American counterterrorism efforts. Today, it pays to have the region’s most innovative economy, most powerful military, and most vibrant democracy on our team. Though the Middle East has lost the geopolitical importance it once had, an alliance with Israel very much remains in America’s interest. From assisting with security threats to providing information technology that powers firms in Silicon Valley, Israel has helped America stay safe and prosperous. The two countries have grown so close that President Barack Obama and Netanyahu both called the bond between them “unbreakable” in 2016.

Yet for a relationship so strong, the PRC has been an irritant for so long. In particular, Sino-Israeli defense cooperation has not sat well with Washington. In 2005, Jerusalem nixed the sale of Harpy assault drones to Beijing following a ferocious lobbying campaign by the United States, which considered the Harpy a threat to Taiwan’s security. Around the same time, the U.S.-China Economic and Security Review Commission stated in its annual report that Israel ranked “second only to Russia as a weapons system provider to China and as a conduit for sophisticated military technology.” Israel had similarly backed out of an arms deal with China in 2000 after Washington objected to the proposed sale of the advanced Phalcon radar system. U.S. government officials had worried that sophisticated military hardware might end up in CCP hands as early as 1992, when the George H.W. Bush administration probed whether Beijing had acquired Patriot missile technology from the Israelis. What has perturbed Washington in the past are signs that Israel could be enhancing the capabilities of the People’s Liberation Army (PLA). All this was before China turned into the economic and military giant it is today.

Indeed, Beijing’s new geopolitical clout has given it the leverage to get what it wants from Israel. Jerusalem should take heed of what has befallen Australia, now subject to egregious Chinese tariffs for having the temerity to demand the CCP permit an open investigation into the origins of the coronavirus in Wuhan. Beijing has also notably pressured a group of Muslim nations dependent on Chinese trade into lauding its appalling treatment of the Uighur minority. In light of the gargantuan Belt and Road Initiative, it’s clear the PRC sees economic power as a means of realizing geopolitical ends. Israel should not assume that it won’t run afoul of Beijing or that it will be immune to CCP bullying. But what exactly does China want from Israel?

Undoubtedly China sees considerable value in that country. There, Chinese firms have sought contracts to operate ports, in some cases successfully. Washington has been especially concerned by the fact that a Chinese company recently won a bid to run a port in Haifa, where the U.S. Navy’s Sixth Fleet routinely docks. It is within the realm of possibility that China could one day run all Israeli ports, thereby controlling its shipping lanes in the Mediterranean and the Red Sea. Suffice to say, Washington would not welcome that outcome.

In addition to infrastructure, China covets technology. The entrepreneurial know-how of the “Start-up Nation” is known the world over, and Beijing would love to acquire whatever proprietary information it can harvest from Israeli companies. Seeing as Chinese intellectual property theft costs the United States as much as $600 billion annually, the CCP has few qualms about stealing from other countries. So far, the PRC has been content to pilfer the trade secrets its Communist economy can’t innovate on its own. That would extend to the Israel Defense Forces (IDF), which are highly dependent on advanced American hardware like the F-35 fighter and also develop military technology and hold joint military exercises with the United States. If Beijing secures more capability to surveil and infiltrate the Israeli military, then it might not even have to steal American military technology from America directly. Israel could be a channel by which the PLA reaches further parity with the U.S. armed forces. Israel could, unknowingly or not, help China get the edge over its American rival. America cannot allow its military technology to fall into the hands of its chief adversary.

THE PROBLEM is Israel and the United States don’t yet see eye to eye on China. In the 1990s and 2000s, Beijing’s center of gravity—as Carl von Clausewitz would say—was weak since it had little economic or political leverage over Jerusalem. Today, its center of gravity lies in the massive economic ties with Israel the CCP has nurtured. They are the Chinese source of strength in the country. Washington must not lose sight of that center of gravity.

Attacking it does not require employing military power. In fact, using armed force against China or Israel should be off the table because the United States only stands to lose in such a military confrontation. Fortunately, the United States derives much of its formidable national power from non-military sources. Diplomacy is one of them, and, as former defense secretary Robert Gates points out in his book Exercise of Power, has been a remarkably effective tool in U.S. statecraft’s “symphony of power.” That this rousing endorsement comes from a seasoned realist who has devoted his life to advancing U.S. security and prosperity is arresting evidence that diplomacy should be taken seriously. He’s right: the arms sales-related protestations raised by the Bush and Clinton administrations show that Washington can diplomatically extract concessions from Israel on PRC matters.

Irrespective of China, the record shows diplomacy with Israel has done much to advance American objectives on sensitive issues. Take the statesmanship shown by Henry Kissinger while he shuttled between Jerusalem and Arab capitals to negotiate a ceasefire after the Yom Kippur War. Yet in the years since, due to underfunding, American diplomatic power has withered, especially compared to the PRC, which now boasts a world-class diplomatic corps. Retaining and reinvigorating diplomatic engagement with allies like Israel will ensure Beijing can’t step in where Washington has stepped back diplomatically.

Good diplomacy depends on good policymaking at home. To the extent that it isn’t already doing so, the U.S. national security apparatus should make sure that those working on Israel policy, whether in the Department of Defense, Department of State, or the National Security Council, make China a top priority—if not the top priority—and coordinate closely with other officials in different agencies as well as their counterparts in Israel. Everyone needs to be on the same page. As Joe Biden takes the reins, Israel hands will have an opportunity to revamp policy in a way a disjointed Trump administration did not.