Out with Globalization, In with Tillerson 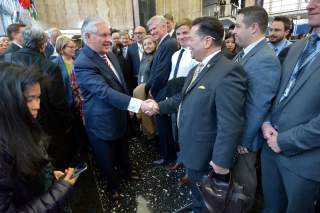 Now that he has moved into Foggy Bottom, Secretary of State Rex Tillerson has big decisions to make. Handling Putin, Kim Jong-un, the ayatollah and Xi Jinping will, of course, top the list. But the secretary will also have to decide how to handle the sprawling bureaucracy he inherits from the previous administration.

Over the last eight years, Barack Obama built a State Department that suited his global agenda. Tillerson must first decide if that makes sense. If not, he must determine what the chief instrument of American statecraft should look like instead. In the long term, Tillerson’s choice could have a far bigger impact on American foreign policy than Trump’s tweets.

A Progressive Tower of Babel

Even before 9/11, there was argument to be made that the State Department wasn’t up to the task practicing statecraft in the twenty-first century. “Only if the State Department’s internal weaknesses are cured will it become an effective leader in the making and implementation of the nation’s foreign policy,” concluded the 2001 Hart-Rudman Commission. The report, which came out more than seven months before the twin towers came down, called for fundamentally restructuring the department.

Hart-Rudman recommended restructuring the State Department “through the creation of five Under Secretaries with responsibility for overseeing the regions.” The commission wanted to elevate the authority of the regional bureaus to address the problem caused by “competing regional and functional perspectives” immobilizing the department and impeding policy coherence. Unfortunately, the State Department has moved in the opposite direction over the past eight years, with functional offices and bureaus accreting more power, staff and resources.

No one championed that cause more than progressives. Channeling the writings of Joseph Nye, they argued for using “soft power” to solve hard problems. After taking the White House in the 2008 election, they started a concerted effort to put that soft power into practice. The 2010 Quadrennial Diplomacy and Development Review was an effort to mimic the Defense Department’s planning guidance, charting a course for transforming State.

Over the years, the State Department was, to use an Obama term, fundamentally transformed. Certainly, it threw a lot more money at soft power. In a 2016 assessment of the department budget, the Heritage Foundation’s Brett Schaefer concluded: “Even with the slight decline in recent years due to sequestration, funding for the total International Affairs budget—the overall 150 account which funds the State Department; foreign information and exchange services; international financial programs; and most humanitarian, economic, and security assistance—was 92.6 percent higher than in fiscal year (FY) 2005 (60 percent in constant 2009 dollars); 146.9 percent higher than in FY 1995 (68.7 percent in constant 2009 dollars); and 236.4 percent higher than in FY 1990 at the end of the Cold War (102.8 percent in constant 2009 dollars).”

There is no question that, over the last eight years, State got a lot more buck for the bang. But the transformation of the State Department involved more than just shelling out more and more money. There was also a tremendous expansion in staff and programs that has dramatically affected how Foggy Bottom does statecraft today.

For starters, a second deputy secretary of state was added. That facilitated a vast expansion in the department bureaucracy, which now tallies more than seventy-two thousand personnel slots. Among the new positions are “more than 60 special envoys, special representatives, coordinators, special advisers, and other senior officials … [each] charged with leading numerous discrete issues.”

Many of these special envoys were chosen to push individual items on the president’s international political agenda—issues that the administration felt, for various reasons, were being insufficiently addressed through the inherited departmental structure. But proliferation of special envoys and advisors has undermined the authority and effectiveness of the regional desks responsible for overseeing U.S. foreign policy and consular services in their part of the world. Instead, little platoons of the department have popped up all over the world, each pushing its own particular agenda.

That might make sense from a desk in Washington, but it makes little sense on the ground. Pursuing global social agendas makes sense only if every part of the globe is the same. They are not. Depending on where you are, conditions on the ground differ, as do U.S. interests.

Dispensing U.S. statecraft in penny packets is just not smart power. The globalist approach to statecraft made the last administration feel good about itself, but it is not clear it did much to advance American interests.

At the same time, there is scant evidence the State Department made much progress in the core business of diplomacy—dealing with the hot spots like Ukraine, Syria and the South China Sea.

Putting first things first, it makes sense to first organize the State Department to deal with the top issues of hard-core diplomacy: returning peace and stability to regions of the world critical to U.S. interests. Secretary Tillerson should start by dismantling all the infrastructure created over the last eight years and pushing resources back into the regional desks, overseen by responsible, competent political appointees. One hugely beneficial first step would be to not fill the second deputy position. Then, Tillerson could use an empowered single deputy to drive structural reform with the department.

At the same time, the department must make sure it never loses its focus on the core competencies and services it must provide. These include assuring the security of department personnel and facilities and providing consular services to American citizens and others.

All this effort should be focused on one goal: empowering the country team under the ambassador. As the Hart-Rudman Commission correctly noted, “Ambassadors should be responsible for planning and coordinating the activities of all the agencies at each mission, including U.S. assistance and law enforcement activities.” Pushing resources to the frontline ought to be the objective of the reform effort.

The department will also have to prepare for the withering criticism it will inevitably receive when it implements changes. Critics will accuse the administration of all ills—from not caring about the environment to abandoning women’s issues. Tillerson’s team will have to make the case that this White House does care about human trafficking, countering extremism and a host more of those special issues; it just believes there might be a better way forward than cheerleading from Foggy Bottom.

Another way Tillerson can make the State Department be all it can be is to ensure that his team pulls in the same direction as its key government partners, particularly with the departments of homeland security and defense. Terms like “interagency” and “whole of government” are overused, meaningless pabulum. All that is really required is leaders who work together in trust and confidence. There are many areas—from regional engagement to export controls to combating terrorism—where better cooperation from leaders at the top can deliver critically important results.

Now that Tillerson is at the tiller, there is an opportunity to make the State Department great again. We’ll see what he does.