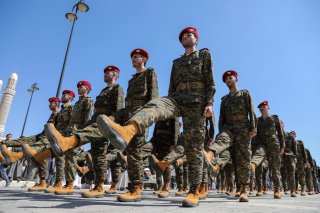 In their recent article for Foreign Affairs, Robert Malley and Stephen Pomper take a sobering look at the Yemeni civil war and the U.S. and Saudi contributions to the humanitarian disaster there. The tragic nature of the conflict in which many innocents have perished is not in dispute. However, a strategic rather than ideological view of the conflict indicates that the lessons from Yemen, which Malley and Pomper claim the United States ought to learn, are far more complex than the authors let on.

In early 2015, the United States faced a menu of undesirable options after being informed of an impending Saudi-led campaign in Yemen to restore the internationally recognized government of President Abdurabbuh Mansour Hadi. By that point, the Houthi rebels had already conquered the Yemeni capital of Sanaa and were on the verge of taking the country’s second city, Aden, which was (and still is) functioning as the interim capital. According to the recollection of former U.S. officials serving at that time, the White House ultimately decided to provide limited support to the Saudi-led coalition in order to reassure allies in Riyadh and Abu Dhabi of U.S. commitment to their defense as well as to rein in some of their worst instincts and to prevent potentially tragic mistakes.

Malley and Pomper lament the continued U.S. role in Yemen while acknowledging that America’s guidance to the Royal Saudi Air Force, however imperfect, may have done some good. They note, “Saudi Arabia almost certainly would have intervened in Yemen even if the Obama administration had rejected its call for help, and it may well have prosecuted its campaign with even less regard for the laws of war absent the United States’ defective supervision.” As of March 2021, estimates for the number of civilians killed by six years of Saudi aerial bombardment range between 4,800 to 9,000. For the sake of comparison, an August 2020 report by the UK government on the Syrian Civil War noted that Russian forces alone were responsible for nearly 7,000 civilian deaths over the course of the conflict, while Syrian regime forces had killed almost 200,000 civilians. A U.S. Department of State report from March 2020 noted that in April 2019 alone pro-Assad aerial and ground forces killed thousands of civilians in Northwest Syria. This comparison is in no way intended to minimize the tragedy of innocents killed in Yemen, rather to shed light on the fact that without the guidance of a government like the United States, which insists on abiding by the rules of war, then the fallout from the civil war in Yemen might have been much, much worse.

Nevertheless, the authors go on to explain that Washington has a responsibility to alleviate the misery in Yemen because “without U.S. support, Saudi Arabia would have found it harder to wage war and, arguably, would have been more eager to find a way out.” If this is their view of better policy, then they should certainly elaborate on the end-state that it might realistically achieve. In the absence of U.S. support, what follows a brief, brutal, and unsuccessful Saudi-led campaign as envisioned by the authors?

It is worth considering two possible scenarios. First, it is conceivable that the launch of the Saudi campaign and Riyadh’s subsequent desire to extricate itself from the quagmire would lead the Houthis to agree to integrate into a unified national Yemeni government in which they would presumably be the prime powerbrokers of a dysfunctional political system, a la Hezbollah in Lebanon. But such a settlement appears unlikely as it would encounter the same issue that the article claims currently drives Houthi intransigence—“Houthi ascendance.” In 2014-2015, the group’s rise from a small, disorganized group in a Yemeni backwater to conquering Yemen’s two largest cities would not incline them toward compromise; all the more so when they are being targeted by an ineffective and inexperienced Saudi adversary that has been separated from its American security guarantor. The second and more likely scenario is that the Saudi-led coalition carries out an even more ham-fisted military campaign that is unable to dislodge the Houthis from significant territories in Yemen and so the Iran-backed group remains in control of the vast majority of the country.

If “ending U.S. complicity” is the top priority for American policymakers, then they may view a Houthi takeover of Yemen as an acceptable result of their withdrawal from the ongoing civil war. But if improving the lives of Yemen’s people is the top priority, then leaving the country to a fate of Houthi rule is unconscionable. While no party in the conflict in Yemen is exempt from allegations regarding violations of human rights or laws of war, the Houthis or Ansar Allah, are especially brutal even by the standards of this gruesome conflict: some of their alleged crimes include sniping frequently to kill children in enemy-held territory, impressing children under their rule into military forces, interfering with badly needed humanitarian assistance, torturing a mother to death in front of her children, and the list goes on. Ending the U.S. role in the war and influencing a more positive outcome of the conflict are two lofty and worthwhile goals, but it may not be possible to achieve both simultaneously.

Malley and Pomper then propose a strategy of pressuring Saudi Arabia to reach a negotiated political solution and asking Iran to reciprocate vis-à-vis the Houthis. But at this point the two sides of the conflict are not symmetrical. Riyadh has sought to achieve a political solution to the Yemen conflict since at least 2019, and after the strike on Aramco facilities in Khurais and Abqaiq Saudi Arabia accepted the Houthi offer for both sides to halt aerial attacks. However, that agreement was short-lived after the Houthis escalated the fighting within Yemen, resumed and even intensified missile strikes on the kingdom, and expanded their demands to include the lifting of the coalition blockade on Yemen in exchange for a ceasefire. This is what makes the proposal to apply more pressure to Saudi Arabia so baffling—if the war has so obviously been a disaster and Riyadh made numerous attempts to end it, it is difficult to see what applying additional pressure on the Saudis could hope to accomplish.

Instead, a concerted effort should be made to push the obstructionist party, the Houthis, into serious talks toward ending the war. So far, the Biden administration’s gestures of goodwill—removing the Houthi Foreign Terrorist Organization designation and announcing the withdrawal of U.S. support for Saudi Arabia’s offensive operations—have not been reciprocated by the Houthis. Instead, the group has dramatically increased the pace of attacks against Saudi Arabia. If Malley and Pomper were concerned that the Houthis would be unwilling to compromise because of the latter’s sense of momentum, the formers’ recommended policies which undermined the Saudi negotiating hand appear to only have reinforced that sentiment.

The Foreign Affairs piece concludes with a recommendation to “candidly reexamine the United States’ posture in the Gulf and recognize how easy it can be, despite the best of intentions, to get pulled into a disaster.” Rather than opting for an oversimplified condemnation of the war and the U.S. role in it, a close and honest look at the U.S. role in Yemen should include an assessment of the strategic options that were available to Washington as well as the outcomes they might have yielded, both in terms what they accomplished and what they averted. The U.S. desire to end its complicity in the conflict is a noble sentiment, but it need not blind decisionmakers to the fact the tipping the balance in the Houthis’ favor could have disastrous repercussions not only for regional security but for the people of Yemen condemned to live under the ruthless Houthi dictatorship.

Ari Heistein is a Research Fellow and Chief of Staff to the Director at Israel’s Institute for National Security Studies. Twitter: @ariheist