Pakistan’s Debt May Be an Opportunity in Disguise 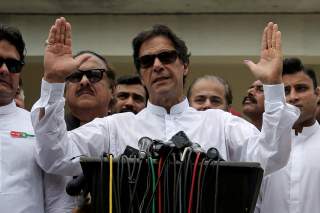 Pakistan’s recent decision to review its economic agreements with China, if implemented successfully, will pay dividends for promoting regional and global stability. While the world stands to benefit from a more developed and stable Pakistan, Beijing’s lending approach and Pakistan’s mounting debt are likely to deliver questionable results. Washington’s proposed “reset” of relations with Pakistan under Prime Minister Khan’s leadership provides an opportunity for the United States to head off the systemic consequences of China’s Belt and Road Initiative while retaining space for Pakistan to make progress on legitimate U.S. concerns.

Pakistan’s past record of economic mismanagement, coupled with China’s predatory loan practices, is a cause for concern; since 2001, Pakistan has turned to the International Monetary Fund (IMF) for three bailouts. Today’s current account crisis, sparked by excessive fiscal spending, rising oil prices and growing private sector borrowing demonstrates that IMF bailouts have not fundamentally changed the Pakistani government’s approach to spending.

A true economic crisis in Pakistan could send shockwaves through the regional security environment. Pakistan’s global importance remains under-discussed given its fragility. But with the world’s sixth largest population, sixth largest military and sixth largest nuclear arsenal, Pakistan’s ability to shape global trends—even if solely through the introduction of relative chaos and unpredictability—should give onlookers pause. An economic crisis could provide the powerful Pakistani military with the political space needed to seize power. In a worst-case scenario, an extremist group or radical faction of the military could gain control of one of Pakistan’s sensitive military or nuclear sites.

Pakistan’s future ability to service China-Pakistan Economic Corridor (CPEC) debt will shape the country’s future solvency. China’s history of exploitative lending raises questions about the economic benefits of CPEC. Beijing has taken advantage of countries with weak institutions, coaxing foreign leaders to sign off on unsustainable levels of debt. Some countries with outstanding Belt and Road loans have begun to push back against China’s use of debt traps. New Chinese “Belt and Road Arbitration Courts” could provide a venue to legitimize a debt-for-equity swap, perhaps providing China with a 99-year lease on Pakistani soil. An unintended second-order consequence of this transaction would be the circumvention of traditional institutions such as the IMF, demonstrating to China that its new, parallel institutions can generate gains on the margins.

CPEC also raises questions about the effect of Chinese influence on Pakistani politics. A 2016 study demonstrated that Chinese investors are not as motivated by political risk when investing. An investigation is already underway in Pakistan to determine if CPEC loans were designed to predominantly benefit the traditional political base of former Prime Minister Nawaz Sharif, providing minimal returns to the country as a whole. Furthermore, China’s ability to encourage Pakistan to develop nuanced strategies to address the ongoing struggle with the Taliban, is dubious at best.  Given Beijing’s approach to Muslim populations at home, exemplified by the current crisis in Xinjiang, it is possible that China could embolden the Pakistani government to take even more repressive steps. Chinese tech firm Huawei has reportedly expanded its “safe cities project” to Pakistan, installing invasive surveillance systems in several cities. Pakistan’s military is likely to harness these capabilities to further cement its control over the political domain.

Despite the risks, Pakistan’s leaders deemed CPEC a viable economic option. Unlike the World Bank and IMF, China does not require Pakistan to implement austerity measures or economic reforms. It is also willing to invest in politically charged regions, such as Gilgit-Baltisan. However, an influx of Chinese cash far from guarantees a prosperous and growing economy. CPEC loans generally require Pakistan to hire Chinese firms and import Chinese goods, reducing the immediate benefits for local workers and companies. The uncertainty of long-term returns increases the prospect that Pakistan will find itself in a financial bind.

Given these concerning trends, it is critical that the United States seize this opportunity to work with Pakistan. U.S. Secretary of State Mike Pompeo’s exploration of a “reset” in U.S.-Pakistan relations following Pakistan’s election is strategically wise as it presents an opportunity for Pakistan to make progress on legitimate U.S. concerns in tandem with forging a more productive bilateral relationship. American policymakers would be well-advised to give Prime Minister Khan room to maneuver domestically if they want to achieve a relationship reset. If hostile or excessive public criticism of Pakistan returns to the forefront, Khan will likely opt for a hardline approach towards the United States to prove his legitimacy and pander to his base. For the time being, Washington should aim for cooperation.

At the top of the agenda should be the resolution of Pakistan’s present economic crisis. Although Islamabad is reluctant to return to the IMF, it is unlikely to receive enough support from Beijing. China’s domestic population, reeling from the domestic P2P lending crisis, would likely oppose any wholesale bailout of Islamabad. Recently, Secretary Pompeo indicated that the United States would not block an IMF bailout, something he and other U.S. officials had previously opposed. This reversal is a promising sign, but it is just a start. A bailout struck without Washington at the table would be one that likely further imperils Pakistan’s long-term strategic interests and increases Beijing’s overall leverage.

Any IMF program should prioritize increasing the transparency of CPEC loans and require Pakistan to reduce its borrowing and spending. Pakistan is already considering cancelling several CPEC projects, including an $8 billion railway update. Washington should go a step further and use any data made available from a Belt and Road transparency initiative to assist Islamabad’s review of unsustainable projects. Mr. Khan, who campaigned on an anti-corruption ticket, appears to be more willing than his predecessors to scrutinize CPEC projects.

Indeed, Washington has an opportunity to use an IMF bailout to guide Pakistan towards a more stable economic trajectory. China must be held accountable for reckless lending, but it cannot come at the expense of incentivizing the creation and use of alternative, Beijing-directed institutions, thereby widening China’s leverage. In lieu of pushing fragile states, such as Pakistan, further into China’s orbit, the United States must ensure that the door remains open for developing constructive solutions. Above all, U.S. policymakers must focus on offering a clear, principles-based alternative that does not aim to out-bid Beijing, but retains quiet confidence in the qualitative advantages of the United States’ approach to economic growth and development.

Abigail Grace is a research associate and Max Hill is a Joseph S. Nye, Jr. national security intern with the Asia-Pacific Security Program at the Center for a New American Security.