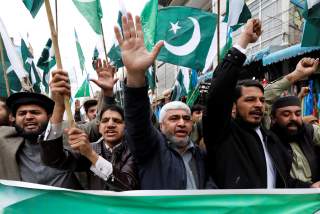 The outbreak of violence last week between India and Pakistan once again reaffirmed that South Asia is home to one of the most dangerous rivalries on Earth. As has happened several times since the Kargil War in 1999, a terror attack involving non-state actors based in and supported by Pakistan brought the two subcontinental rivals into direct conventional conflict, raising fears that an already unstable situation could precipitate nuclear Armageddon. While it is notable that this outbreak of violence subsided fairly quickly (following a decision by Pakistani military and political leaders to de-escalate), it is of far greater significance that no progress has been made in addressing the ethno-religious and political frictions that keep bringing India and Pakistan to blows.

Why do Pakistan and India remain mired in a volatile and perilous status quo, despite that neither side desires escalation nor the prospect of continued conflict? According to Husain Haqqani, a former Pakistani ambassador to the United States and the current director for South and Central Asia at the Hudson Institute, much of the blame falls on Pakistan. Pakistani foreign policy, Haqqani observed at a recent event at the Center for the National Interest, is utterly beholden to the country’s military and intelligence services, which have driven the securitization of Pakistani politics—whether against India, or, more recently, Afghanistan. This problem, he said, goes back to the creation of Pakistan after the partition of British India, where the fledgling Pakistani state was left with only 17 percent of the former British colony’s resources, but 33 percent of its military forces. Since then, he continued, the Pakistani military has done its utmost to “raise the size of the threats to match the army that it inherited,” using external threats to justify its existence and to unify the various ethnic groups living within the country.

Yet while the international focus on Pakistan often pertains to its military capabilities or its support for terrorism, the state itself has fallen into social and developmental disrepair. Haqqani listed a variety of social, political, economic, and territorial ills that Pakistan has confronted over the last forty years, but gave special attention to two: last year, Pakistan has an infant mortality rate that is among the highest in the world, and its literacy rate shrunk by two percent. In Haqqani’s view, this is extremely problematic: “That makes Pakistan’s big picture economic prospects difficult, but the state does okay . . . [by] borrowing from China, Saudi Arabia, and the UAE . . . but there is just no getting out of the deeper crisis that Pakistan is creating for itself as a state. If you don’t have a literate population, you don’t have human capital development. If you don’t have that, where will you make the money to be able to pay back all the loans that you have? You can try to leverage your strategic location as much as you like, but there will come a time . . . when strategic concerns change.”

If the last two U.S. administrations are any guide, Haqqani may very well be proven prescient sooner rather than later. It is clear that the United States, Pakistan’s biggest historical benefactor, is eager to withdraw from Afghanistan, thereby reducing Islamabad’s importance to Washington. “The Pakistanis were not wrong in coming to certain conclusions about the centrality of Pakistan in the strategic calculus of the United States and the region,” judged Gerald Feierstein, a senior career U.S. foreign service official and the director for Gulf Affairs and Government Relations at the Middle East Institute. “It was true in the 1980s [during the Soviet invasion of Afghanistan and later after the 9/11 attacks], but it has become subsequently less true . . . and we’ve been on a declining path for the last ten or fifteen years.”

Much like in the conflict over Kashmir, the Muslim-majority territory controlled by India which Pakistan considers a “forgotten dispute,” Islamabad has employed Islamic extremists to pursue its security objectives in Afghanistan. Pakistani supported militant groups such as the Afghan Taliban, which Haqqani called “the only reliable tool and ally for the Pakistani military,” have exacerbated tensions between Islamabad on one side, and New Delhi, Washington, and Kabul on the other. Yet the United States has still sought to work with Pakistan in the pursuit of U.S. objectives in the region, at least until recently. According to Feierstein, this is because Washington needed Islamabad’s acquiescence for the U.S. war effort in Afghanistan to have any chance of success: “In terms of the air lines of communication, the ground lines of communication, for the United States to supply our forces in Afghanistan and to supply the Afghan forces, we had to have Pakistan.”

Yet, these concerns have become less salient under President Donald Trump. The Trump administration has been seeking a settlement in Afghanistan and is largely reorienting itself to the Indo-Pacific region where it sees dual national security threats from China and North Korea. This transition, Feierstein noted, means “that strategic requirement to maintain the close relationship with Pakistan simply doesn’t exist anymore.” Although he concedes that the United States may “want the Pakistanis to help maneuver the Taliban” toward an acceptable settlement, “it really does not really go beyond that.”

In looking to the future, neither expert believes that a dramatic near-term improvement in the American-Pakistani relationship is likely. China’s buttressing of Pakistan via foreign aid and investment has grown to the point that Islamabad is far more beholden to Chinese interests than American ones. This trend is converging with the United States’ rethinking of its relationship with Pakistan, which only solidifies the notion that Islamabad is no longer in the U.S. orbit, if it ever truly was. Instead, Pakistan will likely continue to be a headache for American decisionmakers, since Washington cannot afford to completely neglect any state with nuclear arms. Regarding U.S. efforts to devise a new U.S. strategy toward Pakistan, Haqqani could only offer the following: “[The United States] gave aid and that was incentive to change and that didn’t work. [The United States is] trying to punish and that isn’t working. What will? . . . Maybe reconciling to the fact that nothing will work will enable you to develop policy tools that might end up working.”