The Pakistan Factor in the India-China Standoff 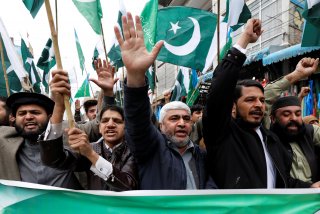 For several weeks, India and China have been mired in a border standoff in the Himalayan region of Ladakh. Much ink has been spilled about this crisis, but one question that hasn’t often been addressed is what it means for Pakistan—India’s bitter rival and China’s close ally.

It’s not an easy question to answer, given that there is much that’s not known about the standoff more broadly. The crisis is playing out in remote, inaccessible terrain, and each government has been relatively mum. Most of the information available comes from China’s state-run media, reportage from Indian media outlets that often cite unnamed sources, and frequently grainy satellite imagery. There is also confusion, given that Beijing and New Delhi disagree over the location of the demarcation of the Line of Actual Control (LAC), their disputed border.

Still, using what information is available, it’s clear that Pakistan derives benefits from the standoff. But it is also disadvantaged in ways that aren’t immediately apparent.

Above all, the optics are suboptimal for New Delhi. At the very least, several dozen Chinese forces made an incursion into indisputably Indian territory (that is, territory recognized by both China and India as Indian territory) last month and remained there for about two weeks. Some Indian media reports—albeit unconfirmed—claim that as many as ten thousand Chinese soldiers crossed into India at various parts along the Line of Control and remain on Indian soil.

Additionally, China has deployed troops in territory that each claims as its own. This may be what Indian defense minister Rajnath Singh was referring to when he said, in a TV interview on June 2, that “sizeable numbers” of Chinese troops have been present at the LAC. There have also been lower-magnitude Chinese provocations, from resorting to fisticuffs with Indian soldiers to using SUVs to ram into Indian military vehicles along the border.

Even though the extent of China’s moves along the border remain fuzzy, it’s clear that Beijing is putting heavy military pressure on India and its territorial claims. For Islamabad, seen from the zero-sum perspective that often frames India-Pakistan relations, this is an unequivocally good thing.

China’s military pressure on India underscores a second benefit for Islamabad: The standoff helps advance a core Pakistani foreign policy goal, which is to deter and undermine India. Because Pakistan’s conventional military power is inferior to India’s, it has long pursued this objective asymmetrically through the stockpiling of nuclear weapons and through the harboring of violent proxies that target India and its interests in the wider region. But Islamabad also resorts to more conventional tactics that include leaning on its close and more powerful Chinese ally to push back against their shared rival.

China’s provocations on India’s northern border put New Delhi on the defensive in its own backyard—and at a moment when India is also mired in a separate border spat with Nepal further to the east, while also confronting new surges of violence to the west in Jammu and Kashmir, near the disputed border with Pakistan known as the Line of Control (LOC). And in fact, with India preoccupied with China, it could face new challenges from its Pakistani rival. Pakistan is currently under severe pressure from the Financial Action Task Force, a global terror-financing watchdog, to rein in terror networks on its soil. However, there is still a risk that Islamabad may capitalize on India’s distractions along the LAC by sending militant assets across the LOC to Jammu and Kashmir to stage attacks—or by encouraging those already there to do so. The chances of this scenario unfolding may have increased now that New Delhi has announced the redeployment of some troops based in Jammu and Kashmir to Ladakh.

For all these reasons, from Pakistan’s perspective, seeing New Delhi bogged down in Ladakh is just what the doctor ordered.

Another benefit for Islamabad is that the border spat has brought international attention back to a seminal move made by India last year that Islamabad rejects and that New Delhi would rather the world not talk about. In August 2019, New Delhi revoked Article 370 of the Indian constitution. This decision, which India regards as a strictly internal matter, stripped Jammu and Kashmir of its special autonomous status and bifurcated it into two new union territories of India. One, Jammu and Kashmir, is claimed by Pakistan. Parts of the other—Ladakh, the site of the current standoff—are claimed by China.

While Beijing’s motivations for its actions in Ladakh are unclear, one reason could be its lingering unhappiness about New Delhi’s revocation of Article 370. Beijing, like Islamabad, sees it as an illegal move to unilaterally change the status of disputed territory that it believes to be its own. Indeed, China’s foreign ministry issued a strongly worded statement the day after the Article 370 repeal: “Recently India has continued to undermine China’s territorial sovereignty by unilaterally changing its domestic law. Such practice is unacceptable and will not come into force.”

Several Indian commentators have acknowledged that the Article 370 repeal may have figured in the current border spat.  One has argued that China is using the move “as a Trojan horse to forward its own stakes in Ladakh.”

Despite these considerable benefits, Pakistan is also disadvantaged by the India-China spat.  For one thing, New Delhi’s relative restraint during the standoff undercuts a key narrative that Islamabad has sought to project globally—relentlessly and emphatically—about the Modi government: That it is a Nazi-like and even genocidal regime with expansionist designs. While India has mobilized troops along the border with China, it hasn’t gone much further than that. New Delhi’s public messaging has been conciliatory, and it has repeatedly pledged to resolve the crisis diplomatically.

To be sure, many in Pakistan will depict this restraint as weakness, and as a reflection of India’s military inferiority vis-à-vis its more powerful neighbor. That disparity is certainly true in a general sense. And yet, a recent Harvard study finds that India actually enjoys a “conventional force advantage” on its border areas with China—suggesting that India has options to retaliate more robustly for Chinese provocations on Indian soil near the LAC.

Additionally, the standoff accentuates the importance of the U.S.-India relationship. In public comments made just before her retirement last month, Ambassador Alice Wells, the top South Asia official at the State Department, criticized Chinese actions in Ladakh and linked them with Beijing’s provocations in the South China Sea. More recently, on June 1, Rep. Elliot Engel, the House Foreign Affairs Committee chair, issued a statement that decried “ongoing Chinese aggression” on the LAC. And on June 2, President Donald Trump discussed the standoff in a call with India’s Prime Minister Narendra Modi.

These high-level U.S. interventions on the spat underscore the intensity of U.S.-China rivalry, which in turn amplifies America’s strong desire to advance its strategic partnership with India—one driven in great part by a shared concern about China. One can’t rule out the possibility of Washington providing quiet assistance to India during the crisis; during the most recent China-India standoff, on the Doklam Plateau in 2017, India benefited from U.S. intelligence.

Any accentuation of U.S.-India partnership is an unwelcome development for Pakistan, and especially at a moment when Islamabad is trying to leverage an improved relationship with Washington—thanks in great part to Pakistan’s facilitation of talks between U.S. negotiators and the Taliban—to push for a deeper rapport. The border standoff, and the U.S. reaction to it, are reminders of just how hard a sell it would be to get Washington to pursue a more expansive relationship with a nation closely allied with America’s top strategic rival—and one that the Trump administration regards as a top national security threat.

The endgame of the crisis—and its implications for Pakistan—is not yet clear. Each side has reason to avoid conflict and talks are planned soon to try to ease the crisis. In any negotiations that take place, a key question is what the two sides agree to do on the ground in order to deescalate the situation. If they agree to revert to the status quo ante, then this could be problematic for Pakistan’s interests, as it may mean that India would be able to continue constructing border roads—infrastructure development that likely fueled China’s recent moves. These roads are highly concerning to China, but also to Pakistan. One of them, the Darbuk-Shayok-Daulat-Beg-Oldie (DS-DBO) road, a 158-mile structure completed last April that features nearly forty bridges and in some places rises to altitudes of more than fourteen thousand feet, links the Ladakh capital of Leh with the Karakoram Pass. This road bolsters India’s ability to project power near the LAC, including in the vicinity of Aksai Chin, a part of Ladakh that is controlled by China but claimed by India. Because this is bad news for China, it’s also bad news for Pakistan.

However, if negotiations to ease the crisis proceed differently, and India must agree to cut back or limit its road building, this would benefit China—and by extension Pakistan. And Beijing may have an upper hand going into talks, given the provocations it has staged in recent weeks. As one Indian analyst puts it, “China will be negotiating from a position of strength and will try to impose unacceptable conditions—no further development of border infrastructure on the Indian side—to restore status quo on its own terms.”