Pakistan Is No Friend to America 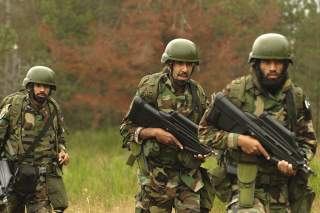 Since the earliest years of the so-called global war on terrorism, Pakistan has played a double game. With one hand, it has taken some $33 billion from the United States in the name of partnering with it to fight Islamist militancy in Pakistan and Afghanistan. Yet, with the other hand, it continued to kill Americans and their Afghan partners, as well as NATO and non-NATO allies in Afghanistan, through its varied proxies such as the Afghan Taliban, the Jalaluddin Haqqani network, Lashkar-e-Taiba and others. And increasingly, it seems likely that Pakistan colluded to protect Osama bin Laden—the very reason why the United States invaded Afghanistan in the first place. While Pakistan has tenaciously maintained the viability of these so-called Islamist militant assets, it has prosecuted a brutal campaign of violence and threats of violence against Pakistanis who are fighting for a saner Pakistan, one that it is at peace with itself and its neighbors.

It is well known that Pakistan harbors the Afghan Taliban, and that it provides every kind of imaginable amenity to the organization, inclusive of political, military, diplomatic and financial support. It is also well known that Pakistan affords similar perquisites to other groups that the United States and the United Nations consider to be terrorist groups, such as Lashkar-e-Taiba, Jaish-e-Muhammad and the Haqqani network, among others. However, the degree to which Pakistan’s civilian and/or military leaders actively sought to protect bin Laden remains a serious question.

Carlotta Gall, in her 2014 volume The Wrong Enemy, asserts that Pakistan’s notorious intelligence agency, the ISI, had a desk dedicated to overseeing his protection. As is well known, bin Laden was “hiding” in plain sight a mere mile or so from the famed Pakistan Military Academy. His home was a Spartan but fortified compound with high walls, limited communications and a small electrical profile for the outsize compound. They even burned their trash in the compound itself. His security was surprisingly absent, suggesting that bin Laden felt reasonably secure. He fathered several children, two of whom were delivered in government hospitals in Karachi, where they received the bin Laden name. (It is likely that they also received birth certificates, although this cannot be confirmed).

Pakistan’s position on bin Laden is difficult to parse. On the one hand, officials claim that there was no government effort to support him. On the other, when the United States initially offered Pakistan, in the words of one highly-placed official, “a ride on the victory bus,” Pakistan had no interest. While early U.S. statements suggested that the United States could not have accomplished this without Pakistani cooperation; the Pakistani government soon made it clear that it had no part in the raid. Soon thereafter, civilian and military leaders alike vocally decried the U.S. raid that killed him as a breach of Pakistan’s sovereignty. The civilian government convened the so-called Abbottabad Commission Report, which ostensibly aimed to discern how bin Laden entered the country and who protected him. The report fell considerably short of identifying any culprits who harbored him. The only person they have arrested is a lone physician, Dr. Shakil Afridi, who helped the U.S. effort. Afridi is being held under violations of the Frontier Crimes Regulations, a colonial-era legal regime that does not even apply to him.

However, Pakistan is keenly interested in pursuing the one man who did much to help the United States: Husain Haqqani, Pakistan’s ambassador to the United States from 2008–11. A recent article by Haqqani in the Washington Post on how diplomats build contacts with incoming administration officials was described in Pakistan variously as a “confession” or “admission” of secretly helping the Americans in finding bin Laden. Ignoring the question of why and how bin Laden lived for years in Pakistan, the country’s politicians and media are busy condemning Haqqani for inadvertently helping conclude the hunt for the world’s most wanted terrorist by granting visas to American operatives who, along with Pakistani nationals, located bin Laden.

Alas, Haqqani is not the only foe of terrorism that the state is hunting. In recent years, the Pakistani state has launched a tenacious crackdown upon a wide array of activists who oppose the perduring state project of jihad and a creeping, vulgar Islamism that has led to grievous sectarian and communal carnages throughout the country. These activists include secular bloggers and other social media activists, civil rights lawyers, journalists, musicians, and other dissidents, such as Baloch and Sindhi ethnic activists. These diverse activists generally oppose the army’s instrumentalization of so-called jihadis as principal tools of foreign policy and the government’s tacit alignment with Islamism. For these reasons, they are considered “enemies of the state” and have been relentlessly harassed and threatened with violence. Sometimes the thuggish arms of the state arrive at their home or place of business in caravans of black SUVs with government plates and disappear them. While some are returned after periods of internment and abuse, others are never seen again. Few of these persons have the resources to flee Pakistan or the skills to make new homes in safer countries. To further marginalize and endanger the foes of the state’s twin projects of jihadism and Islamism, private citizens—no doubt at the state’s behest—file blasphemy charges. Even if they are acquitted in court, it is not uncommon that vigilante hordes murder the accused, along with members of their family.

The relentless prosecution of reformers whose only real crime is wanting a saner, more peaceful and less querulous Pakistan stands in contrast to the leeway the state gives to the menagerie of terrorists the Pakistani state maintains to kill on its behalf in Afghanistan and India. These groups enjoy police protection at their residences, in their offices and when they travel. Pakistan’s intelligence agencies keep a close protective eye on them, moving them into safe houses when needed. Pakistan’s military forces train them and equip them. Pakistan’s intelligence agencies plan their attacks.

I agree. The United States needs to right this course. Washington needs to demand that Pakistan knock off its jihad habit while at the same time working to ensure this relentless liberal witch hunt ends. The United States has many tools at its disposal, ranging from sanctions, to declaring Pakistan to be a state sponsor of terror, to significant curbs on military assistance. Washington needs to muster the intestinal fortitude to employ these tools—now.

C. Christine Fair is an associate professor at Georgetown University’s Security Studies Program. Most recently she is the author of Fighting to the End: The Pakistan Army’s Way of War and co-editor of Pakistan’s Enduring Challenges.