Pakistan's Crippling Strategic Isolation Is Its Own Fault 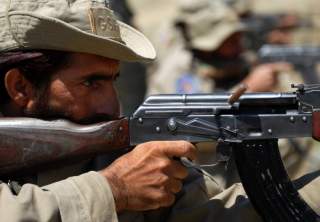 A sovereign state’s foreign policy changes with the times, and according to its domestic needs and external changes in global politics. Nations have national interests, and there are no permanent enemies and friendships in international politics. Neighboring states can be a boon or a bane, depending on the ability to recognize one’s long-term interests of sustainable peace on its borders.

Pakistan’s recent relations with Afghanistan have been one such example, with Pakistan as a state unable to define its foreign policy and national interests beyond a Cold War paradigm. An India-centric foreign policy has stalled Pakistan’s foreign-policy evolution and tainted its worldview of international politics. Pakistan currently has strained and difficult relations with all its neighbors except China.

Following the Kargil War in 1999 with India, Pakistan faced international isolation, and national anxieties shifted to its western border, in order to stave off the very real risk of nuclear escalation with India and continue with its proxy war in Afghanistan. Pakistani foreign-policy makers and mostly military elites thought that acquiring the upper hand in Afghanistan and containing the warring tribesmen next door would be a much easier task.

The post-9/11 involvement of the international community in Afghanistan and its commitment to quelling the Taliban-led insurgency have, however, left Pakistan regionally and internationally isolated, despite its involvement as a key ally in the War on Terror.

Pakistan has failed to utilize the shared cultural, linguistic, economic and ethnic realities of its western borders, while India has moved in to execute huge economic development, both real and symbolic, of the Afghan state. Despite having a Pashtun president in power in Afghanistan, and the Pakistani establishment’s claim of having forged closer ties with Afghanistan’s Pashtun population, ties could not move beyond the historic burden of Pakistan’s deep involvement in Afghanistan. Pakistan seems to trust only the regressive and fundamentalist forces of the Taliban as its foreign policy evolves.

Regionally, the leaders of Iran, India and Afghanistan have signed a historic deal to develop the strategic port of Chabahar in Iran, and agreed on a three-nation pact to build a transport-and-trade corridor through Afghanistan, which could not only help strengthen regional connectivity by boosting economic growth in the region, but by the same token reduce the time and cost of doing business with both Central Asia and Europe. Pakistan’s suspicion of India threatens to entrench relations of conflict and competition at the expense of cooperation and stability with all its neighbors. The knee-jerk reaction of Pakistan’s foreign policy to the Chabahar port was to close down the Torkham border crossing with Afghanistan and enforce visa restrictions for both sides of the Durand Line, leaving those on both sides in the lurch.

Many speculate that the tightening security at the Torkham border is a political move rather than a curb on militant activities, if the likes of Mullah Mansoor have been found with Pakistani passports, traveling in and out with more ease than genuine Pakistani passport holders.

Pakistan’s obsession with India has strained its western border, affecting its own Pashtun population on its side of the Durand Line, mainly in Khyber Pakhtunkhwa and FATA. Movement across the Afghan-Pakistani border generates revenue for both Afghanistan and Pakistan. The two countries exchange goods and services worth some 2.7 billion euros ($3 billion) annually across the Durand Line. Despite the illegal trade and smuggling, both countries benefit a great deal from cross-border movement.

Pakistani policymakers regard the instability of the western border and its Pashtun population’s sacrifices rendered easier to deal with and placate than any disturbance on its eastern border of Punjab, in the context of Pakistan-India relations and engagement with Afghanistan.

Foreign-policy makers interpret the shift in border hostilities from east to west as being in the broader national interest of Pakistan, and the consider tragedies like the Peshawar Army Public School attack, where 140 children were mercilessly killed, or the young lives lost at Bacha Khan University, as collateral damage in the pursuit of Pakistan’s core national interests and territory, particularly Punjab.

This Pakistani policy seems to have pushed the country toward regional and international isolation. As India’s power in Afghanistan expands, especially its soft power, Pakistan is losing its position of economic and strategic privilege. Since India’s Prime Minister Narendra Modi came to power, he has paid two visits to Afghanistan. On his first visit, he inaugurated the new Afghan parliament building that was built with the support of Indian government, while on his second visit on June 4, to the heart of Asia, he inaugurated the $290 million Indian-funded Salma Dam, one of the country’s biggest hydroelectric projects. Pakistan, on the other hand, has been dealing with the awkwardness of either stating its reputation or support for the Haqqani group or the Taliban insurgent leader Mullah Mansour, killed in a drone attack on its soil.

Pakistan’s powerful military elite needs to bury the bogeyman of the Cold War and understand the complexity of relations with Pakistan’s two neighboring states.

Pakistan has absolutely failed to maintain robust relations with its all neighbors. Surveying all its immediately neighboring countries except China, Pakistan has failed to sustain good relations with Afghanistan, China, India and Iran. This indicates a failure of Pakistani foreign policy in a region that gave rise to its isolation, which will have serious existential repercussions in the long run.

The Durand Line as a border is much less relevant to ordinary citizens than to the state. Poverty, poor infrastructure, healthcare and other important state functions tend to be precarious on both sides, and the weak presence of the state has left locals on both sides to provide for their own needs. Pakistan, with its India-centric policy, needs to realize that hostile relations with Afghanistan are unsustainable in the light of its growing regional isolation. Selling the idea of the China-Pakistan Economic Corridor might work for its eastern border but not for its western border with Afghanistan, whose own dynamics must be recognized.

Aziz Amin Ahmadzai writes on political, security and social issues in South, West and Central Asia. He is based in Kabul and tweets at @azizamin786. Mona Naseer is from FATA, a political and social commentator on the Pakistan-Afghan region. She tweets at @Mo2005.