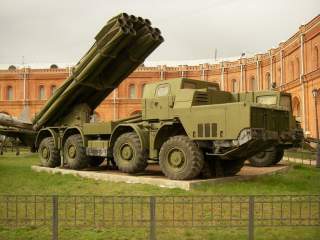 While the world continues to focus primarily on the threat of Iran’s nuclear weapons program, a potentially much greater nuclear threat has emerged just to its east: Pakistan, the Islamic world’s only nuclear-weapons state.

Pakistan is one of the world’s only eight declared nuclear powers and probably the one that causes the most mischief. Pakistan sponsors and harbors militant groups that carry out attacks in all of its neighbors: India, Afghanistan, Iran, and even China.

Although Pakistan argues that its nuclear weapons are well-guarded, many experts are not so sure, pointing out that the Taliban and other militants have frequently struck at supposedly secure military bases with impunity. More worrisome, though, is Pakistan’s history of proliferation, which increases the chance that one day some element or the other in the Pakistani military will provide nuclear materials to an even more dangerous third party—or even to a stable country like Saudi Arabia, which could set off an arms race in the Middle East.

Also troubling is the steady radicalization of Pakistani’s military, which could at some point turn into the ideological equivalent of the Taliban. American lawmakers who constantly fret about the irrationality of the Iranian government should take note of the continuous Islamization of Pakistan’s military. Here are five things you need to know about the world’s most dangerous nuclear weapons program.

Why does Pakistan have Nuclear Weapons?

At first glance, it may seem strange that Pakistan has nuclear weapons, as it maintains close relations with China and the United States, neither of which would allow it to be dismembered. Even its rival India does not wish to see it collapse, but that doesn’t stop Pakistan from having nuclear weapons largely for one reason—India.

This is not only because India itself has nuclear weapons (ostensibly because China has them), but also to achieve parity with a rival that is many times larger than it in terms of size, population, and economic prowess.

Ultimately, however, nuclear weapons give Pakistan reassurance that it will never be humiliated the way it was in 1971, when Indian forces decisively defeated Pakistan in a two-front war that lead to the independence of east Pakistan as Bangladesh. If Indian forces were to ever enter Pakistani territory in such force again, it is likely that Pakistan would compensate for its conventional military inferiority by using battlefield nuclear weapons to prevent a repeat of its total defeat in 1971. This plan makes India’s Cold Start military doctrine—a swift incursion into Pakistan that would capture vital territory before Pakistan could retaliate—hard to implement.

Nuclear weapons also help Pakistan continue to bleed India. Pakistan’s possession of nuclear weapons are considered its “shield” to guard against retaliation from any punitive strike in response to attacks conducted by terrorists based in Pakistan. This gives Pakistan significant leeway in making mischief in India.

Pakistan conducted peaceful nuclear research from the time of its independence but began a nuclear weapons program in earnest only after its defeat by India in 1971. India itself conducted a nuclear test in 1974 and rejected proposals for a nuclear free zone in South Asia. Pakistan’s nuclear weapons program began in 1972 under Prime Minister Zulfikar Ali Bhutto, who had always been a proponent of going nuclear. Bhutto famously declared: “If India builds the bomb, we will eat grass or leaves, even go hungry, but we will get one of our own.”

Indeed, it was Pakistan’s poverty that held it back from pursuing a nuclear program in the 1960s, despite reports that India was secretly working on nuclear weapons. To compensate for this, and to accelerate the development of its own program, Pakistan resorted to subterfuge, deceit, and help from generous friends in order to go nuclear.

Pakistan’s nuclear weapons program took off under the leadership of Dr. Abdul Qadeer (A.Q.) Khan, who began trying to enrich uranium at the secret Engineering Research Laboratories (ERL) in 1976. Prior to this, A.Q. Khan worked from 1972-75 at the Physics Dynamic Research Laboratory in Amsterdam where he had access to information on uranium enrichment. Subsequently, he left the Netherlands for Pakistan with secret documents that detailed the construction of a uranium centrifuge. Once back in Pakistan, Khan’s laboratories developed a uranium enrichment plant. Khan was convicted in absentia for theft in 1983; later on, he was linked to the sale of nuclear designs and materials to North Korea, Iran, Iraq, and Libya.

In the meantime, a 1983 U.S. State Department report revealed that China had assisted Pakistan with its nuclear program—most probably to keep India in check—and had even supplied Pakistan with complete blueprints for a nuclear bomb. By 1984, Pakistan had the ability to enrich uranium to weapons grade levels. Yet work stalled for a few years in the late 1980s for a variety of reasons: American pressure and Pakistani fear of an Indian or Israeli strike. Throughout this period, Pakistan continued to improve its deliver capabilities. Pakistan finally conducted a nuclear test in 1998, in response to an Indian test that same year.

Pakistan currently possesses about 120 nuclear weapons, more than India and Israel. Pakistan does not have a nuclear triad, but that is likely to change soon with the news that Pakistan has bought eight diesel-electric submarines from China, which could be equipped with nuclear missiles.

Pakistan currently has extensive land and air based nuclear capabilities. With the development of Pakistan’s newest missile, Shaheen-III, which has a range of 2,750 kilometers, Pakistan is capable of hitting all of India and can also reach Israel. Pakistani F-16 fighters can also drop nuclear bombs deep in Indian territory and can hit major cities like Mumbai and Delhi. Finally, Pakistan is believed to be developing tactical, battlefield nuclear weapons, which are necessary for its strategy to counter India. Pakistan’s Nasr Missile has a range of 60 kilometers.

Pakistan does not have to worry about its second strike capabilities to the extent that some other countries do because of its size, which allows nuclear weapons to be scattered around multiple sites and because it has not adopted a no-first-use nuclear doctrine, meaning Pakistan is perfectly willing to use a nuke first, before retaliation. This hurts India’s nuclear deterrent capabilities, since theoretically Pakistan can hit every Indian nuclear site first (India has a no-first use policy).

Various reports indicate that Pakistan has joined the United States in offering to use its nuclear weapons to shield allies against nuclear threats. In Pakistan’s case, these countries include the six Arab members of the Gulf Cooperation Council (GCC), especially Saudi Arabia. Saudi Arabia is said to have funded Pakistan’s continued expansion of its nuclear stockpile in return for a guarantee that Pakistan would provide Saudi Arabia with a weapon or a nuclear shield in the case of Iran getting a bomb.

Therefore, Pakistan’s nuclear program is not only a cause of instability in South Asia; it also makes the Middle East much more dangerous. There is no guarantee that Saudi Arabia may not try to secretly acquire a nuclear weapon from Pakistan no matter what Iran does. The Wall Street Journal reported that Saudi Arabia all but expects Pakistan’s instant support in the nuclear field whenever needed.

Nuclear rivalry in South Asia has reached an especially dangerous phase as Pakistan can now reach all of India and deploy battlefield nukes. The New York Times is right to note that in nuclear terms, Pakistan is the “biggest concern.” Pakistan’s factional government filled with rogue agencies is a much bigger threat to nuclear nonproliferation than Iran ever will be as there is no guarantee that someone will not provide nuclear material to terrorists or rogue groups despite orders not to do so. At least Iran is tightly controlled and methodical about what it does.

Pakistan’s arsenal of 120 nuclear weapons is rapidly growing, and could triple in a decade, giving it more nukes than France, Britain, and China. Yet Pakistan remains a desperately poor country, plagued by instability and extremism. These make it especially dangerous and more likely that its nuclear weapons will at some point be misused. All of this makes it more likely that Pakistan will continue to avoid becoming a normal country, driven by trade and development, and more likely to compensate for these failures through distracting its population with the mostly baseless India threat.

Ultimately, Pakistan’s behavior is unlikely to change because it can continue to support militants against India without fear of major retaliation. The expansion of its nuclear program merely reinforces this and adds to instability in South Asia. The only incentive to change its way would be ideological, and Pakistan continues to head in an even more radical direction while the military remains obsessed with the threat of India over all else. Pakistan’s nuclear program has given security in South Asia a very bleak future.