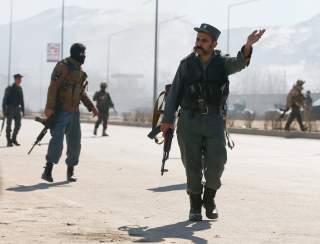 For decades, Pakistan’s spy service has operated as a formidable U.S. adversary, albeit dressed as a friend, especially in Afghanistan. It has endlessly frustrated the Afghan war efforts since 2001 by playing Santa Claus to all manner of anti-Afghan militant groups, mainly the Taliban and the Haqqani Network. This support has morphed the Afghan conflict into a bloody contest of competing interests and influence, where ISI’s toxic influence is supreme. ISI’s role in managing several anti-India proxy networks is also unmistakable.

ISI is no ordinary intelligence agency. It operates under Pakistan’s military command and is highly secretive, politically influential, patient, alarmingly active and ruthless to anyone they see as opposition. Unlike what some reports suggest, ISI is not a rogue agency but rather a disciplined, non-factional, cohesive and bureaucratic enterprise, where reports of defections are rare. The institution is also well-off. with its active and retired personnel frequently profiting from numerous Pakistani military-owned charitable foundations and corporations. The agency’s nearly twenty-five thousand personnel is mostly ethnically homogeneous, hailing predominantly from the army ranks.

More troublingly, the organization operates under a philosophy that it needs enemies to remain relevant—and in control. This paranoia has allowed the service to manufacture pet militant groups and imaginary threats to drive its motives. To do so, the service allegedly maintains a roster of nearly one hundred thousand militant fighters at its discretion.

Inside Pakistan, ISI sits at the core of the Pakistani state. It has regularly challenged the country’s civilian rule and has hampered Pakistan’s democratic progress through systematic coercive campaigns against dissenting voices, including politicians, activists, academics and the media. It has forged alliances with extremist religious groups and fringe political parties meant to control the Pakistani people by keeping them subservient to the state. As such, ISI has used old tactics wedded to the new, including intimidation, forced disappearances, arbitrary detentions, torture and assassinations. The service also frequently engages in sabotage activities, psychological operations and influence campaigns. More worryingly, ISI’s infatuation with jihadi groups has adversely affected the agency and has turned segments of the agency increasingly extremist.

In Afghanistan, ISI’s Afghan operations are undertaken by at least three units. The first is Directorate S, the principal covert action arm that directs and oversees the Afghan policy, including militant and terrorist outfits and their operations. The second unit is the Special Service Group (SSG), also known as the Pakistani SS, and are the army’s special forces element that was established in the 1950s as a hedge against the communists. Today, some SSG units effectively operate as ISI’s paramilitary wing and have fought alongside the Taliban until 2001. In other instances, SSG advisors have allegedly been embedded with Taliban fighters to provide tactical military advice, including on special operations, surveillance, and reconnaissance. In fact, encountering ISI operatives fighting alongside the Taliban in Afghanistan has become a common occurrence that no longer surprise Afghan and American forces. The third ISI unit is the Afghan Logistics Cell, a transport network inside Pakistan facilitated by members of Pakistan’s Frontier Corps that provide logistical support to the Taliban and their families. This includes space, weapons, vehicles, protection, money, identity cards and safe passage.

Such ISI support networks have been designed to break Afghanistan into pieces and then remold it into a pliant state. The objective is to complicate Afghanistan’s security landscape and drive its political climate into an uncharted constitutional territory to create a vacuum, which inevitably places the Taliban in the driving seat. These support actions have visibly made the group more effective. However, the Pakistani mantra is that they maintain contacts with the Taliban but exercise no control over them.

Yet the ground realities suggest otherwise. The Taliban has recently become deadlier and adaptive. The old Taliban has, in effect, transformed into a new Taliban—decentralized and sated with recruits, including mid-level commanders, who come fresh out of the Pakistani madrassas eager to kill. This new decentralization has enabled the group’s young frontline commanders to exercise greater autonomy in the field, allowing ISI to leverage them for their needs. ISI reportedly manage their leadership succession, bypassing the Taliban’s chain of command.

The Taliban’s devolution of authority has also seemingly fractured the movement’s unity and cohesion and has resulted in multiple power centers within the movement. The group is increasingly taken over by the Haqqani Network, which controls at least 15 percent of the Taliban’s manpower and influences many smaller Taliban fronts. Meanwhile, the Taliban's leader, Haibatullah Akhundzada, and his principal deputy, Sirajuddin Haqqani, are allegedly on bad terms, which has also disturbed the movement’s unity. The new Taliban’s funding now streams not only from the Pakistani intelligence but also from drug trafficking, racketeering, extortion and kidnapping for ransom, where the Haqqanis play a seminal role.

Meanwhile, some Taliban groups have taken on to undertaking basic state-like functions, including levying taxes on local businesses, overseeing kangaroo courts, resolving local disputes, and operating organized schooling. The Taliban uses such state-like measures to create legitimacy for themselves among the local people. Unsurprisingly, this has formed a tacit social pact between helpless local Afghans and the Taliban—a bargain in which the group guarantee no harm to the local people in exchange for their compliance. However, this frail Taliban-civilian relationship exists because of the Taliban’s intimidation and killing campaign, rather than peoples’ compatibility with the group.

More vitally, the Taliban have adopted a robust resource-efficient operational strategy meant not only to fragment Afghan forces but also to capture more territory. This strategy has enabled the group to determine where and when to fight, in which they skillfully avoid the strongest elements of Afghan forces and instead target where they are weakest. The group frequently employs similar tactics in their operations such as ambushes, traps, surprise and simultaneous coordinated attacks and, increasingly, the use of snipers. At the same time, the group has advised their fighters not to give away information upon capture for up to forty-eight hours to allow Taliban leaders the time to render any reports useless. Pakistani intelligence has been in many respects in sync with this Taliban strategy. In contrast, Afghan forces are often blind on the battlefield.

Simply put, Pakistan’s ISI has turned terrorism into a school of thought, directed from the country’s governed spaces that remain undefeated. What can the United States do to unravel the Gordian knot of the Pakistani intelligence and its support to terrorist groups? Three things.

First, the United States should begin to treat the Pakistani spy agency similar to how it manages Iran's Revolutionary Guard Corps (IRGC). This would involve the U.S. Treasury Department adding Pakistan’s ISI and its affiliate, the Special Service Group—akin to Iran’s Quds Force—to the U.S.’ antiterrorism sanctions list. By doing so, the United States would impose targeted sanctions, including visa bans and asset freezes, on active and retired Pakistani intelligence personnel with ties to terrorist networks. Meanwhile, Washington and Kabul should encourage defections within the Taliban ranks, meant to loosen ISI’s grip on the group. Washington can extend defected and corrigible Taliban members some sanctions relief, including relaxing travel restrictions, to help build confidence.

Second, bolster the Afghan intelligence apparatus to become relevant and in sync with the Taliban’s shifting strategy. This would require boosting Afghan intelligence capabilities to include a 360-degree collection effort to better understand the internal leadership dynamics and changing tactics of the Taliban and other groups. Similarly, the Afghan Defense Ministry should increase the number of its S2 intelligence and information officers in Afghan forces to handle tactical intelligence and security clearances at the unit level. These officers should also be trained to trace militants, track Taliban surveillance routes, manage interrogations and weed out infiltrators. Meanwhile, the Afghan government should deploy counterintelligence assets to its prisons to limit the communication of Taliban detainees with their leaders outside.

Third, the Trump administration should cease the cyclical pattern of its tempestuous relationship with Pakistan. Unfortunately, America’s Pakistan policy has followed a much too predictable pattern for over sixty years that incentivizes the Pakistani military for cooperation that in fact does not truly exist. This recurrent pattern of the U.S. relationship with Pakistan is often tactical and reactive. In the first half of the cycle, for example, the relationship spins around convening strategic dialogues and state visits by Pakistani leaders followed by U.S. military assistance and other concessions. But in the cycle’s other half, the warm period abruptly comes to an end until an unexpected event prompts the next standard cycle in the bilateral relationship. Instead, the United States should adopt fewer carrots and more sticks policy and ensure that the stick is tough enough to change Pakistani state behavior meaningfully.

In short, Pakistani intelligence has mainstreamed terrorism and political violence in the region. In Afghanistan, ISI appears increasingly confident in its assertiveness and is seeking a maximalist outcome. It is operating from a position of strength, but no position is so strong that it is permanent. ISI still requires access to funds and defense supplies for its reach, internal stability, as well as legitimacy. The United States can deny or strictly condition that access to them. Meanwhile, Washington should voice its support to the peaceful Pashtun movement, an investment that could potentially pay off and serve the United States in the fight against extremism.