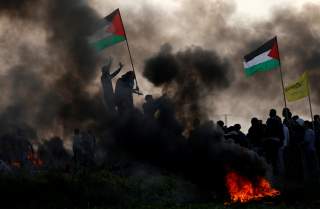 On the face of it, it appears absurd that tiny, disarmed and occupied Palestine would threaten to derecognize Israel, the Middle East’s dominant military power and the United States closest ally in the region. However, this is exactly what happened last Monday when the PLO’s Central Council recommended to its executive committee that the PLO suspend recognition of Israel until the latter reciprocates by recognizing the state of Palestine. Although this recommendation was in part a response to President Trump’s decision to move the U.S. Embassy in Israel to Jerusalem, its roots go back to deep Palestinian frustration with the Israeli policies since the Oslo Accords of 1993, which have thwarted the emergence of a viable, independent Palestinian state next to Israel.

As stated above, President Trump’s decision to move the American embassy to Jerusalem acted as a catalyst leading to this recommendation. It did so by finally removing the veneer of relative impartiality that the United States had donned toward the Israel-Palestine conflict. This was clear to most close observers of the conflict, but the fiction had been maintained in order to justify America’s role as “honest” mediator in the conflict. This narrative was convenient for both parties: the Israelis benefited directly from U.S. mediation as the mediator made every effort to protect Israel’s interests in the negotiations, sometimes even acting more Popish than the Pope to secure these interests.

The Palestinians stuck with this myth because as the much weaker party they had no other option, especially after the demise of the Soviet Union, except to collect the crumbs that fell from the U.S. table. This also suited the PLO/Fatah admirably since they could call on American, and therefore Israeli, support in intra-Palestinian disputes, especially in their rivalry with Hamas. However, with the Jerusalem decision the PLO/Fatah have finally recognized that their association with Washington has come at a very high cost both for the Palestinian cause and for their own credibility among the Palestinian people.

The more important fallout of President Trump’s decision is that it has forced the Palestinian leadership, especially the aging PLO bureaucrats, to revisit the fundamental error that they had committed by recognizing Israel without a reciprocal recognition by Israel of a Palestinian state within the 1967 borders. The PLO did so twice: first implicitly at a meeting of the Palestine National Council in Algiers in 1988 and then formally at the time of the Oslo Accord in 1993. All it got in return at Oslo was Israel’s recognition of the PLO as the representative of the Palestinian people.

Such recognition had become redundant by 1993 because King Hussein of Jordan had withdrawn his claim to represent the Palestinians several years ago and the PLO had been recognized by most of the international community as the representative of the Palestinian people. Other than buttressing Yasser Arafat’s ego, Israel’s recognition of the PLO did not do much more than temporarily enhancing its stature vis-à-vis competing Palestinian organizations. It did nothing as far as the recognition of a putative Palestinian state was concerned.

Arafat accepted this bargain despite advice to the contrary offered by many of his senior advisers. The late Edward Said, a foremost Palestinian intellectual termed the Oslo Accord “an instrument of Palestinian surrender, a Palestinian Versailles.” Leading Middle East historian Rashid Khalidi, a Palestinian himself, declared that the Oslo Accord and the resulting “peace process” was “not a structure that was designed to lead to a resolution of the conflict. This is actually conflict maintenance, at best, that the United States is engaged in.”

The essential logic behind such criticisms was that Arafat squandered his most important card—the Palestine National Movement’s recognition of Israel—without receiving anything substantial in return. He naively trusted his Israeli and American interlocutors to deliver the Palestinian state to him without getting them committed to the boundaries of such a state or indeed to the concept of a Palestinian state itself.

The Israelis having received the PLO’s recognition and secure in the power superiority they enjoyed over the PLO in the occupied territories were post-Oslo under no compulsion to stop Jewish settlements or genuinely work with the PLO to create a viable Palestinian state within the 1967 borders. The pace of Jewish settlements and of the erosion of the Palestinians’ residual autonomy accelerated with Benjamin Netanyahu’s accession to power first in the 1990s and again since 2009. As Israeli-British scholar Avi Shlaim declaimed in 2010, behind the charade of a peace process, “Netanyahu is like a man who, while negotiating the division of a pizza, continues to eat it.”

This week’s discussions at the PLO Central Council demonstrate that Arafat’s critics have been proven right even by the PLO’s own assessment. However, this admission still does not answer the question: What does the PLO intend to achieve by threatening to derecognize Israel? It is true that mere derecognition of Israel by the PLO is not going to substantively improve the Palestinian situation or immediately level the playing field. The PLO is too weak and Israel too strong for that to happen. However, this strategy, if implemented wisely and courageously, could be turned into a formidable political tool to advance Palestinian interests.

In order to achieve this the PLO must totally overhaul its strategy regarding the conflict. The revamped strategy must reflect the reality of the situation on the ground, especially in the West Bank. The ground situation in the West Bank makes it clear that an independent Palestinian state is no longer on the cards because the West Bank has been Balkanized and Jewish settlements and settler-only roads constructed in such a fashion that it is impossible for a contiguous and viable state to emerge. Additionally, Israel’s uncompromising demand for a military presence on the Jordanian border as well as a totally disarmed Palestinian state would leave the rump Palestine absolutely defenseless and at the mercy of its Jewish neighbor, a situation not very different from the one currently prevailing in the occupied territories. The Palestinians will gain nothing from the nominal change from occupied territory to disarmed state.

What the PLO leadership should now do is to elaborate upon its threatened derecognition of Israel by adding that it will derecognize Israel “in its present form.” The emphasis should be on the term “in its present form.” It must then go on to lay out its vision for the future of the territory encompassing Israel and the occupied lands. This entire area from the Jordan River to the Mediterranean Sea, the PLO should argue, should be constituted into a single state, call it Israel if you will, with equal rights for all its inhabitants, Jews, Muslims and Christians. Such a formulation will simultaneously refute the Zionist paradigm for Israel-Palestine as well as voluntarily embrace the inevitability of the one-state solution that Israel’s own policies have all but guaranteed will come to pass. By pursuing this course the PLO will be embracing reality while at the same time putting Israel on the defensive.

While such a vision will mean sacrificing the Palestinian goal of national self-determination, it will advance the agenda of implementing the ideal for which the Palestinian national movement had fought in the 1940s, namely the creation of one state between the river and the sea with equal rights for all its citizens. Recently, senior PLO figure and veteran Palestinian negotiator Saeb Erekat has endorsed the one-state idea, which is gaining traction among segments of the Palestinian leadership.

Such a stance will throw the Israeli political elite into a quandary. For the only alternative to a binational and multireligious state will be a state based on apartheid both in law as well as in fact where civil and political rights are reserved for only one ethnic group and the dominant-subordinate relationship is codified in legal terms. This, even the Israeli right recognizes, will be unacceptable to the large majority of the international community and even American support for Israel will not be enough to save it from international opprobrium and economic sanctions a la South Africa.

When faced with the prospect of a one-state solution radical Israelis may contemplate a repetition of the ethnic cleansing that accompanied the creation of Israel in 1948. However, the changed sensibility of the international community and the altered circumstances in the Middle East today are unlikely to allow anything approaching a repetition of that episode. By advocating a one-state solution with equal rights for all its citizens, the PLO would put the responsibility of getting out of this conundrum firmly on the Israeli government and its political elite. Such a step on the PLO’s part would also shake up the international community and may force it into action that could break the current impasse on the future of Israel-Palestine.

However, for this to happen a leadership change in the PLO/Fatah is absolutely essential. The octogenarian Mahmoud Abbas is out of tune with the current thinking among younger Palestinians. Despite his fiery rhetoric at the recent meeting of the Palestine Central Council in which he declared the Oslo process dead and spurned American aid, Abbas is unable to break out of his old way of thinking, which is still confined within the two-state mold.