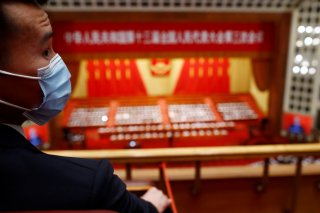 In addition to Trump’s threats not to support NATO and other Allies who did not spend a sufficient amount of their GDP on defense (as determined by Trump), the Trump administration’s Peace through Strength doctrine is concurrently working to unsettle U.S. allies who cannot be absolutely certain if the United States will come to their defense.

Here, for example, the Trump administration has pulled heavy B52 bombers, plus B-1s and B-2 stealth bombers, from Guam in order to reduce potential targets for China’s “Guam killer” missile, the DF-26, and North Korea’s Hwason-12, while deploying these long-range bombers, armed with long-range strike missiles and supported by aerial refueling tankers, much more randomly. Pentagon spokespersons have argued that these heavy bombers can reach the Pacific in less than a day from their mainland bases in places like North Dakota and Louisiana.

But here, Louisiana is one area hit by the coronavirus. And these bomber deployments will still delay reaction times in the new world of hypersonic warfare—thereby raising Allied concerns and potentially sparking regional arms races if American Allies continue to fear that the United States will not back their security. Given projections that the total U.S. national debt could possibly reach the $40 trillion range somewhere in the years 2026–27, Allied fears are also bound to augment significantly if there are massive cuts in U.S. defense expenditure in an effort to reduce U.S. national debts. But this scenario will prevail only if Washington cannot soon reduce tensions through engaged diplomacy with China, Russia and Iran, as well as North Korea, among other states.

What is needed is a new U.S. and European diplomatic strategy intended to split the burgeoning alliance between Russia, China, and Iran, and that draws Russia closer to the United States and European Union, while concurrently seeking a concerted U.S.-EU-Russian strategy that seeks to channel China’s rise to hegemonic status—in the process of reducing global tensions and demilitarizing an increasingly dangerous world.

With respect to Iran, an alternative diplomatic approach is to return to the 2015 JCPOA nuclear deal and then negotiate a follow-on nuclear agreement that builds upon that deal. In working with the Europeans, as well as with Russia and China, such an approach would additionally seek to implement a Missile Technology Control regime for missile programs throughout the entire Middle East and to try to prevent all destabilizing arms transfers to the countries in that region. Such an approach would accordingly encourage Iran-Saudi negotiations to put an end to their proxy wars in Yemen, Iraq, and Syria. Here, all states in the region (and in the world) could pledge a no-first-use of any kind of weapon of mass destruction.

The increasing risk is that even if the United States and/or Israel do not go to war with Iran over its nuclear enrichment and missile programs, Trump’s “maximum pressure” strategy and tough sanctions—coupled with the recent collapse of world oil prices—risk the dangerous destabilization of Iran, Yemen, Lebanon, Syria, and Iraq, among other weak states.

As illustrated by the U.S. drone assassination of the Iranian Quds force leader Major General Qassem Soliemani, along with pro-Iranian Iraqi militia leaders, Iraq—which has increasingly been rocked by pro- and anti-Iranian protest—is becoming a new battlefield for the United States and Iran, along with Syria. Contrary to Trump administration assurances, this regional crisis is opening the door for the return of Daesh (Islamic State)—which has recently augmented ambushes, IED attacks, and assassinations in Diyala, Kirkuk, Anbar, Dijah, and Salahuddin, Iraq. Other militant groups of differing ideologies could also come to the forefront throughout the region.

With respect to China, Washington, Beijing, and Taipei need to forge a new arrangement that builds upon the 1979 Taiwan Relations Act before the latter accord is discarded. This new arrangement can be accomplished by the implementation of joint United States, China and international security guarantees for Taiwan. Such an approach would seek to implement U.S.-Chinese security cooperation and joint regional state development projects in the South and East China seas. Likewise, a cooperative U.S.-China policy toward North Korea—in effort to reduce both the conventional and nuclear weapons build-up between Seoul and Pyongyang through confidence measures and investments in North Korea to boost wages and employment—can help stimulate the United States and China to additionally cooperate in the East and South China seas.

With respect to Russia, the United States should extend the New START treaty before it expires in February 2021, but then concurrently work toward a new multilateral arms reduction agreement that includes China’s intermediate-range missile systems if possible. The United States should also participate directly in a trilateral diplomacy involving France, Germany, Ukraine, Russia and the OSCE to resolve the conflict in eastern Ukraine. NATO and Russia likewise need to work out a rapprochement that leads to a significant reduction of their respective military build-ups in eastern Europe through the implementation of confidence and security-building measures, while seeking compromise over the Russian annexation of Crimea. This approach could be based on the formal recognition of a neutral Ukraine and on a U.S.-NATO-EU-Russia cooperative security approach toward the Baltic, Caucasus, and Black Sea regions.

In this regard, the 2015–2020 European Deterrence Initiative has tended to augment U.S. defense spending for an American forward presence that seeks to counter Moscow, but that also contains Germany/Europe under a U.S.-led NATO aegis. Instead, Washington should be seeking ways to boost all-European contributions for military spending—but in the process of creating a more equitable sharing of U.S.-EU defense and security burdens and responsibilities—so as to eventually establish a U.S.-European-Ukrainian-Russian entente.

To re-emphasize, there will be no long-lasting peace until the United States and EU begin to reach out for a general entente with Russia that will seek to channel Beijing’s hegemonic ambitions—while concurrently seeking joint security and economic accords with China.