With the Pandemic Receding, Europe Must Now Turn to the Problem of the Euro. 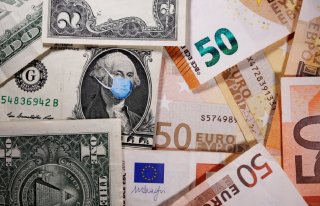 With Europe emerging from the worst of the coronavirus pandemic, its leadership can at last return to the continent’s more long-standing problems. Primary among them is the European Union’s common currency. Though Europe’s leadership seems loath to admit it, the euro lies at the root of the union’s economic and financial trouble. Biases enshrined into the currency at its founding have fostered unhealthy economic dependences and have distorted development. Yet, Europe’s leadership seems reluctant even to consider a fault with the euro. Christine Lagarde, head of the European Central Bank (ECB), has stated that she will do “whatever it takes” to preserve the common currency unchanged, almost as though it were a religious totem. She would do more for her union and prosperity in Europe if she advocated the currency’s restructuring or its abolition altogether.

The seeds of disaster were planted at the beginning. When the union adopted the euro, it accepted each new member at the exchange rates dictated by markets at the time. The approach made for administrative ease and must have seemed reasonable. After all, exchange rates on average and over time do reflect the issuing economy’s underlying strengths and competitive abilities. But at any point in time, prevailing market rates can deviate dramatically from those underlying fundamentals. That was the case at the common currency’s inception. Each national currency joined the euro at relative rates far different from its economy’s relative strength.

Germany’s situation was particularly noteworthy. In the late 1990s, while Brussels structured the euro, Germany still struggled with the problems of reunification east and west. Integrating two very different economies and very different peoples had proved harder than most anticipated when the Berlin Wall fell in 1989. A dominant opinion at the time held that perhaps the once powerful German economy had bitten off more than it could chew. The Deutschemark reflected such concerns. It had declined steadily against most currencies throughout the 1990s, almost 30 percent against the dollar, which then was riding high on Silicon Valley’s technology boom. The Deutschmark also fell against most European currencies, over 12 percent against the French franc, and from the mid-1990s over 20 percent against the Italian lire.  Germany clearly joined the euro as a weak player. But as has become clear, that cheap Deutschemark grossly understated Germany’s underlying economic power. Had the euro been true to the fundamentals, Germany should have joined at a much higher rate.

By accepting Germany at a low exchange rate, the euro gave the country a mix of economic advantages and disadvantages. For the average German resident, the euro’s mistake inappropriately understated the global buying power Germany’s underlying productive ability gave its people. The euro, then, discouraged German buying abroad, including in the rest of Europe. At the same time, the understated German exchange rate used to form the euro secured for German producers and exporters a tremendous pricing edge. The low value of the Deutschmark at the time had already made German goods and services look remarkably cheap to the rest of the world including the rest of Europe. Germany enjoyed high volumes on extremely profitable terms. No doubt, as the fundamental strength of the German economy had become evident, the value of the Deutschmark would have risen, removing this special edge. But the euro prevented this otherwise inevitable development. Instead, the common currency enshrined the temporarily cheap exchange rate of that moment, ensuring that German business would have pricing advantages indefinitely.

The reverse happened with members who joined from Europe’s Mediterranean periphery. Their individual national currencies had risen in the run-up to the euro’s formation. Those gains reflected the widely held belief at the time that the common currency would accelerate development in these economies. By ridding people of the uncertainties surrounding the values of their national currencies, the euro’s engineers argued, trade would flourish to the benefit of all but particularly to the poorer members of the union. Those currency designers argued further that as part of the euro-zone these southern nations and their producers could borrow at lower interest rates than previously, encouraging them to invest more than they otherwise might in productive efficiencies and modernization. If these economies lacked the underlying strength and competitive abilities others had, then the widely held argument went, they would soon develop them. Because their national currencies had risen in anticipation of such improvements, these countries joined the euro at rates that overstated their existing economic strengths.

They saw a mirror image of the euro’s impact on Germany. Their consumers acquired an inflated notion of their global buying power. They expressed it through a preference for imports, most especially from Germany, where the euro made products attractively priced. Meanwhile, the high exchange rates the euro enshrined for them made their domestic products look expensive to outsiders. Their domestic producers had trouble competing with their equivalents in Germany or even producers outside Europe. So while the Germans became reluctant buyers on world markets but natural producers, Italians, Spaniards, Greeks, and Portuguese became natural buyers with disadvantaged domestic producers.

Not surprisingly, imports to the union’s Mediterranean members surged after the euro was introduced. German sales in Italy, for example, had remained fairly stable through the 1990s. They jumped immediately after the euro’s inception, rising 12.5 percent in just the next three years. By 2008, before the global financial crisis had its devastating effects on world trade, Italy’s imports from Germany had more than doubled from their pre-euro levels. The country’s trade balance sank. In 1999, Italy boasted a strong surplus of exports over imports exceeding a dollar equivalent of $22 billion. By 2003, that surplus had shrunk to a dollar equivalent of only $7.2 billion. After that, Italy’s trade balance sank into the red until austerity measures imposed in 2011 drove the Italian economy into a deep recession. The rest of Europe’s southern tier had similar experiences.

These countries then compounded their problems. Italy again illustrates matters well. As the deteriorating trade balance began to make it apparent that the Italian economy’s fundamentals could not really give the country’s residents the kind of global buying power they imagined they had as the euro went into effect, Rome decided to spare the Italian people the shock by borrowing to offer them government support. It was relatively easy to do so, since the euro, at least at the beginning, did offer the Italian government easy access to cheap credit. The same things were occurring in Spain, Portugal, and Greece. All the borrowing did was build a debt burden and extend the unsustainable behavior prompted by the biases built into the euro.

To be sure, the borrowing might have improved the competitive abilities of producers in Italy and these other countries, but again the disadvantages imposed by the euro discouraged such uses for the money. Businesses in these countries, already facing sales declines and impossible competition from German producers, understandably had little appetite for spending on expansion. Instead, business managers acted defensively. They closed down where they could and pleaded with their governments for subsidies. The ease of borrowing tempted governments in these countries to comply with such requests. The subsidies then killed any remaining incentive among their domestic businesses to invest in the kind of productivity advances that might have enabled them to meet the German competition. At the same time, German producers, watching their sales volumes climb and retaining especially attractive pricing advantages, eagerly spent on expansion, modernization, and efficiency improvement. So as economic prowess in Europe’s southern periphery weakened, the German economy built on its advantages. As the balance of economic power shifted further in Germany’s favor, the exchange rates enshrined in the euro became even less connected to economic realities.

There is no way to gauge with precision the amount by which the euro has missed the real world of economic power. A best estimate emerges from data collected by the International Monetary Fund (IMF). It compares market exchange rates with a measure that might serve to capture underlying economic strengths— the exchange rate that would equalize the prices of tradable goods and services with the rest of the world, what economists refer to as purchasing power parity (PPP). On this basis, the bias built into the euro at its January 1999 inception amounted to some 6 percent. That would seem to be a manageable difference, but the trends it has fostered—on consumption patterns, business development, and debt use—have made the situation less and less tenable. By 2010, at the time of the first of several European crises to come, this gap between the euro’s structure and the reality of relative economic strengths had widened to between 15 and 20 percent. This gap has since expanded still further. As of 2019, the most recent period for which data exists, it exceeded 25 percent.

As long as this currency bias exists, Europe’s crises will persist. Indeed, they will get worse because, as should be clear, the trends fostered by the biases have only exaggerated the initial distortions. Yet, EU leadership seems determined to look at anything but the underlying problem of its common currency. In one sense, that impulse is understandable. No one, most especially political figures, likes to admit an error, especially one as devastating as this one. Perhaps, the union’s leadership remains unaware of its mistake. Comments by Christine Lagarde indicate that might be the case. Certainly, leadership in Berlin, whether it is aware of the problem or not, has little interest in addressing it. The euro’s biases give Germany too much advantage.