Papal Bull: Why Is Francis Trying to Smackdown Trump? 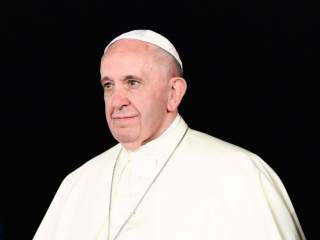 With Pope Francis essentially condemning Donald Trump as unchristian, the U.S. presidential race has taken another bizarre turn. The Pope had already held a Mass at the border between Mexico and America. Next, while flying back to Rome, he goaded Trump further. He said that the true gospel is that “building walls” is “not in the gospel.” He added, “A person who thinks only about building walls, wherever they may be, and not building bridges, is not Christian.”

That’s true enough, I suppose, for Israelis whose wall has effectively stanched terrorism emanating from West Bank. But the truth is that when it comes to the American election, this is nothing but papal bull. Since when does the Vatican get to determine how Americans should vote?

Of course Francis says that a smackdown of Trump isn’t really his aim and that he’ll “give him the benefit of the doubt” (not that Trump seems to be asking for it). “As far as what you said about whether I would advise to vote or not to vote, I am not going to get involved in that,” Francis said.

But what Edward Gibbon referred to in the Decline and Fall of the Roman Empire as the “blast of the ecclesiastical trumpet” was surely unmistakable. Few declarations since Pio Nono announced the infallibility doctrine have created as much of a furor, at least for the length of the twenty-four-hour news cycle, thereby demonstrating just how far the presidential race has degenerated into name-calling. Indeed, now that Rome has weighed in on the Republican primary, it only seems appropriate to invoke Cicero’s famous lament: O tempora! O mores!

Not surprisingly, Trump, as is his wont, isn’t taking Francis’ brickbats lying down. Instead he took the fight right back to Francis. “If and when the Vatican is attacked by ISIS, which as everyone knows is ISIS’s ultimate trophy,” Trump said, “the pope would only have wished and prayed that Donald Trump would have been president because this would not have happened. ISIS would have been eradicated unlike what is happening now with our all talk, no action politicians.” For his part, Trump has not been shy about questioning the religiosity of his rivals. He recently asked on Twitter, “How can Ted Cruz be an evangelical Christian when he lies so much and is so dishonest?”

But one politician taking down another is a little different than Francis issuing what amounts to an informal edict against a Republican candidate for the presidency. He seems willfully oblivious of his responsibility to remain impartial in secular political matters. Reasonable people can disagree about their resolution.

Whether Francis’s intervention will actually have any effect upon the American election seems dubious. As the Atlantic’s Emma Green notes about Catholic supporters of Trump, “If those voters were planning to support Trump before this kerfuffle, it seems unlikely that this exchange would compel them to switch their votes. For Catholics, as with other American religious groups, faith may or may not influence their pick of candidate: In a recent Pew poll, roughly similar percentages of Republican Catholics and Protestants thought Trump would make a good or great president.” Similarly, the Washington Post’s Philip Bump greeted the brouhaha between the two men with something of a yawn: “The Republican Party is more heavily evangelical than Catholic, and conservatives had already grown skeptical of Francis's politics. And, of course, people like Trump getting in fights and defending his positions.”

Thus Francis’s intervention seems more likely to assist rather than to impede Trump’s rise. Trump’s Jacksonian streak means that he views foreign leaders, religious or not, with a good deal of skepticism, if not truculence. Going mano a mano with Francis is likely to please his burgeoning flock. His refusal to genuflect to Francis is further evidence that when it comes to the presidential race, Trump remains the most heretical candidate.