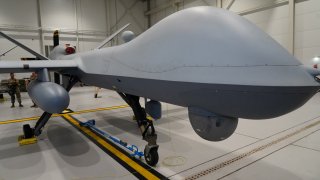 While historically able to perform some radio communications and, of course, share information through ground-based command and control, some existing data links and radio communication systems can experience latency challenges regarding the speed of information flow as well as data processing impediments when it comes to the need to organize, analyze and transmit crucial incoming targeting data. Now, F-22 jets to F-35 fighter jets to MQ-9 Reaper drones have real-time information sharing, targeting cooperation, information processing and operational connectivity without needing to incorporate ground-based command and control, represents paradigm-changing possibilities for modern warfare.

Some of the most recent technical innovations, such as Northrop Grumman’s Freedom 550 software programmable radio, are built with a specific intent to preserve information stability and security. Stealthy fifth-generation platforms, for example, can give away their location by sending a large volume of multi-frequency data transmission. The larger an electronic signature, emission or transmission, the more detectable it may be to an enemy. The challenge is to enable connectivity while simultaneously maintaining “stealth mode.”

“We are working on a demonstrator using a radio as a translator to convert data sent from and F-35 to an F-22 in a stealthy manner. It involves using software-defined radio hardware and software and antennas,” Colin Phan, the director of strategy and technology communications for Northrop Grumman, told the National Interest.

The communications and targeting breakthrough was all part of an ambitious combat preparation exercise in Alaska called Northern Edge wherein numerous combat assets operated in high-end mock-combat wargames to conduct multi-domain missions against extremely sophisticated, high-end adversary forces. The in-flight, real-time fifth-generation to fifth-generation to drone connectivity amid combat operations is an extremely significant development, as it is the kind of thing that offers what could be called a foundational pillar in the Pentagon’s move toward its new integrated, multi-domain Joint All Domain Command and Control (JADC2) program. It is an ambitious and extremely impactful concept rooted in the idea that drones, cargo planes, fighter jets and even ground forces and ships at sea function as communications “nodes” able to network data across the force in seconds. This speeds up the warfare decisionmaking cycle to conduct operations “at speed,” stay in front of an enemy and exponentially reduce sensor to shooter time.

Referring to these newer kinds of network-enabling innovations in terms of a “data-driven battlespace,” Phan explained that the Freedom 550 radio gateway-enabled data “translator” has been engineered with a specific mind to bringingJADC2 to operational reality.

“What we’re all talking about under the JADC2 umbrella is ensuring that resilient, scalable networks are enabled to read, share and process data at the edge of combat. This is key to providing our customers with a real-time decision-making capability to address the near-peer threat and maintain decision superiority,” Phan said.