Paraguay’s Endemic Corruption Will Not End Without U.S. Intervention 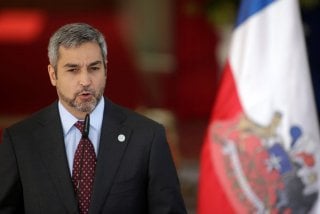 On April 8, after a three-year judicial ordeal, Paraguay sentenced Hezbollah financier Assad Ahmad Barakat to two years and six months for passport forgery and immigration fraud. Barakat already served his time while awaiting trial, and Paraguayan authorities swiftly expelled him to Brazil. For a country that for decades hosted Hezbollah’s terror finance networks with impunity, sentencing Barakat, whom the United States Department of Treasury sanctioned in 2004, looks like a welcome change. It is not. Barakat’s expulsion changes nothing. The Hezbollah networks in the area are unaffected and his supporters are already hailing his return home as a victory.

The Biden administration—which just last week sanctioned Ulises Quintana, a member of Paraguay’s National Assembly, for corruption and aiding transnational organized crime—should recognize that Paraguay remains a haven for organized crime and terror finance thanks to its corrupt political elites. Unless Washington keeps its attention and pressure on Paraguayan leaders, Asunción will only put up a show, much like the expulsion of Barakat, but do little else to address the systemic corruption abetting crime within its own borders.

For decades since the 1989 overthrow of Paraguay’s fascist dictator, Alfredo Stroessner, the country’s old elites have embraced democracy while benefiting from Stroessner’s legacy—a largely corrupt power structure, heavily compromised by a black economy of contraband and illicit trafficking. The twin engines of that economy remain vast, porous frontiers and thriving money-laundering centers along the country’s borderlands, especially in the notorious Tri-Border Area of Argentina, Brazil, and Paraguay (TBA). Since the 1980s, Hezbollah has built a sophisticated trade-based money laundering center in the heart of a retail commerce-free zone in Ciudad Del Este, on the Paraguayan side of the TBA.

The TBA’s illicit economy poses a serious threat to the integrity of the U.S. financial system. A large quantity of merchandise shipped to the TBA to fuel illicit schemes transits through the United States. So do payments, which, as a growing number of cases currently being tried in America show, are exposing the U.S. financial system to money laundering and terror finance.

Paraguay’s financial system is compromised: terror finance, cigarette contraband, the trade of counterfeited goods, smuggling, and tax evasion fuel fraud and draw organized crime like a magnet. Numerous criminal syndicates have established their presence there in recent years, where they grease the public sector to ensure complicity in their criminal activities. Growing international concern has put pressure on Asunción to change course, but to little effect so far. Even as Paraguay’s legislature passed new laws to improve its anti-money laundering and terror finance regulations, the gap between stated intents and actual results remains.

To be sure, Paraguayan prosecutors, at least those who are not in the pay of politicians and criminal networks, continue to doggedly investigate crime. The prosecutions of Barakat and Quintana are proof that even a country ranking 137 in Transparency International Corruption Perceptions Index for 2020 can still find integrity among its public servants. Under increased pressure and scrutiny, Paraguay also cooperated with the United States in the arrest and extradition of three suspected Hezbollah traffickers and financiers: Ali Issa Chamas in 2017, Mahmoud Ali Barakat in 2018, and Nader Mohamad Farhat in 2019. And in 2019, Paraguay designated Hezbollah as a terrorist organization.

Yet with some exceptions, investigations rarely yield convictions, which is something that is regularly lamented in the annual State Department International Narcotics Control Strategy Report to Congress. Corruption sabotages the course of justice more often than not, with politicians taking money from criminal networks to fund their electoral campaigns in exchange for political cover and immunity from prosecution.

Barakat has operated with impunity for more than two decades in this corrupt environment, despite the occasional run-ins with local justice and the U.S. Treasury designation in 2004. In 2018, the Argentinian government, under then-President Mauricio Macri, took the unprecedented step investigating a TBA money laundering network linked to the Barakat family, which was moving cash into Argentina and using a local casino to launder it.

Going after the most prominent member of the Barakat clan seemed a good way to respond to mounting U.S. pressure and international attention and show that Paraguay too was ready to rein in local terror finance networks. In August 2018, Paraguayan authorities accused Barakat of passport fraud and issued an international arrest warrant for his capture. Brazilian authorities arrested him soon after in Foz do Iguaçu, the Brazilian city in the TBA that sits across the river from Ciudad Del Este, the main site of Hezbollah’s terror finance activities in the area.

Brazil eventually extradited Barakat to Paraguay. A swift trial followed, leading to expulsion. Yet expelling Barakat to Brazil, where he is a permanent resident, is meaningless. Brazil has no open case against him. He served his time. And while technically Barakat cannot return to Paraguay ever again, the border crossing in the TBA is not exactly an insurmountable barrier.

Nothing illustrates this better than the case of Ulises Quintana, who is currently under investigation and has spent time in jail, for facilitating, through his position as an elected official, a drug trafficking scheme. Quintana tried every trick in the book to derail the investigation, and after his release from jail in 2020, has resumed official duties as a parliamentarian inside the National Assembly.

Quintana is now running for mayor of Ciudad Del Este, Paraguay’s second-largest city and the main hub of its illicit economy. He remains the candidate for the ruling party—an alliance of two movements, headed by the current president, Marito Abdo, and his predecessor, Horacio Cartes, who is wanted in Brazil for money laundering.

The Biden administration has made the global fight against corruption a keystone of its foreign policy. Last week’s U.S. announcement that Quintana and his wife are henceforth barred from entering America on grounds of corruption and aiding transnational organized crime is a clear signal that Paraguay needs to do more. Yet that applies to Washington as well. Paraguay’s sporadic actions so far have failed to disrupt the intricate web of organized crime and terror finance exploiting its porous borders and corrupt governance. Yet, these actions also show that its governing elites respond to pressure from Washington. That is why U.S. sanctions against Quintana should not be the endgame, but the beginning of a sustained campaign where no corrupt politician or criminal figure should be beyond reach.

In the great Italian novel, The Leopard, by Giuseppe Tomasi Prince of Lampedusa, the young Sicilian aristocrat Tancredi famously quipped, “Everything must change, for everything to remain the same.” Tancredi and Sicilian aristocracy faced radical changes, as Italy’s unification swept away their feudal old world. To preserve the old power structure, they had to embrace the new and, like a leopard, they changed their spots. Paraguay is doing the same thing. Its ruling cupola manages to pretend it is changing course so that everything can stay the same. It is up to Washington to make sure change will be real.

Emanuele Ottolenghi is a senior fellow at the Foundation for Defense of Democracies, a non-partisan think tank focused on national security and foreign policy. Follow him on Twitter @eottolenghi