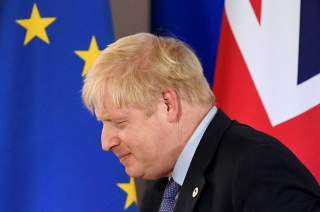 When given a choice between voting for or against a new deal to withdrawal from the European Union, the British parliament has instinctually delayed the question, a surprise to no one who has been observing the Brexit process for the past forty months.

This morning, during its first Saturday meeting since 1982, parliament passed the Letwin amendment with a vote of 322 to 306, which puts off the final vote on Prime Minister Boris Johnson’s new deal until possibly Tuesday. Hard Brexiteers voted against the amendment and falling in line behind Johnsons’ deal despite grumbling. Meanwhile, the rebel Tories, previously expelled for party disloyalty on Brexit, split their support. The Democratic Unionist Party (DUP) and the North Irish in coalition with the Conservative Party—but upset at how the deal handles the Irish backstop—did not blink and voted for the amendment. Their ten votes were the difference.

The charitable view is that MPs voted for the Letwin amendment to give themselves a few more days to consider the deal and learn it’s ins and outs, while also ensuring the stopgap measure of preventing a No-Deal Brexit. With no deal passed, Johnson will be legally required to request the European Union for another extension by 11 pm London time. It’s likely the letter will be from the British government as a whole, and not the prime minister, as a face-saving measure. After all, Johnson has campaigned for months on not extending the Brexit deadline a single day.

The Guardian reports that the European Union will grant an extension if necessary, and that even French President Emmanuel Macron will not object. However, there is an exhaustion in Brussels, just like in London, that after three embarrassing years Brexit should be finalized. Word from the EU is that they will not officially grant an extension until parliament has officially voted on the deal.

A more skeptical view of the Letwin amendment’s supporters is that at heart they are Remainers and have no interest in seeing the United Kingdom be independent from the European Union commissioners.

“What Johnson is trying to do is force people into the position of saying ‘I’m against Brexit. It’s not a question of if it’s a good deal or a bad deal, I’m against Brexit,’” says Andrew Stuttaford, contributing editor at National Review. “Some parties have absolutely no problems with doing that; Liberals don’t, Scottish Nationalists don’t. But the Labour Party is in the more difficult position, because it is trying to play to all sides of the audience.”

As parliament voted, many thousands (organizers claim a million) marched and protested outside asking for a new Brexit referendum. The original 2016 referendum resulted in a fifty-two, forty-eight split in favor of leaving the European Union. London, where the protest took place, has been the hotbed of Remain anger, as a majority of their fellow Britons voted in a way disagreeable to the urban class.

“This is an incredibly divided society now, between Remain and Leave. And how politically that will shake out in the end, is to me, is the most important question,” says Stuttaford.

So far, those divisions only look set to increase now that parliament has put Brexit in limbo.