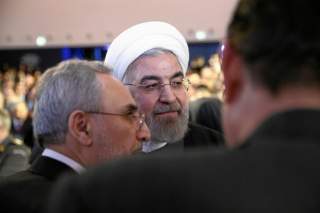 When it comes to understanding a state’s grand strategy, that is, the calibration of intentions and the sum of capabilities to assure its relative position within the international system, the specialist is frequently faced with the challenge of divining intentions—assuming the leaders in question themselves know what they want. This is doubly the case for states such as Iran that, while authoritarian, are at once riven by significant domestic divisions, possessed of impenetrably opaque decision making and consequently disposed to emitting mixed signals. Consider the ink Iran watchers have spilt debating Tehran’s undying revolutionary ends, regional hegemonic ambitions, “rationality” and survival-motivated expediency, often within the same breath. For non-great powers with only a limited margin of maneuver, however, a more empirically grounded approach that allows us to better carve the subject at the joints, so to speak, is by focusing on the notion of “grand strategic adjustments.”

Take again the Islamic Republic of Iran, for instance. At three specific inflection points at intervals of roughly ten years, Iran’s decision makers undertook just such “adjustments” in response to systemic pressures and incentives. The end of the Iran-Iraq war and the Cold War, along with Khomeini’s death, fundamental revisions in the domestic structure of rule and the onset of the Gulf War compelled the first major crop of far-reaching changes. For one, the relatively moderate and forward-thinking Rafsanjani government shifted Iran onto a surer, pragmatic footing, a more balanced calibration of ends and means, along with the streamlining and rationalization of strategic decision making and institutions, signaling Tehran’s readiness to play by the rules of the international system. No longer would factional caprice set the tone and pace for foreign policy, as it had done in the context of the U.S. embassy hostage crisis. Instead of undying antagonism, Rafsanjani’s technocrats reached out to industrialized and rentier states alike, whose cooperation was necessary for the rehabilitation of the Iranian economy, including its inveterate rivals Britain and Saudi Arabia. The impetus for internal balancing, however, failed to overcome the inertia posed by the increasingly influential traditional conservatives led by Supreme Leader Ali Khamenei, who rejected mending fences with the sole remaining superpower—the U.S.—and its Zionist ally Israel.

In security and military affairs, Iran under Rafsanjani’s stewardship shifted from an obstinately gladiatorial thrust perfected during the eight-year war with Iraq to a more indirect Byzantine approach to pursue its national objectives. Not only did it cultivate the godless Russians and Chinese as major-power counterweights to Washington, which was by now running the entire show in the Persian Gulf to Tehran’s consternation, but it relied on both to shore up its critical defense, energy and nuclear sectors. Rather than earmarking massive resources towards a conventional military buildup, Iran opted to develop or acquire high-leverage asymmetric capabilities, including a brood of non-state armed allies, ballistic missiles and ultimately a nuclear program. What it lacked in coercive capacity it more than made up for in deterrent capability. If a pattern emerged that betokened this physical “line of least expectation,” to use Liddell Hart’s turn of phrase, Iran nonetheless maintained an ideological “line of greatest resistance” when it came to the US and Israel. No doubt this proved strategically costly within Iran’s ends-means calculus. Yet the alternative of détente or even worse, entente, would have insured political suicide for the helmsman of such a policy turnaround, thus routinizing a pattern for subsequent grand strategic thinking.

The second inflection point came when Osama bin Laden’s planes brought down the Twin Towers in lower Manhattan, followed by the U.S.’ campaign of retribution in Afghanistan and Iraq. In the space of eighteen months, this suite of events completely remolded Iran’s strategic environment, engendering both threats deemed existential as well as crucial strategic opportunities. The reformist Khatami government of this period recognized the symmetry of interests on its wayward eastern border under the new circumstances, and labored to first put in place, and then maintain functional security cooperation with the Americans. When a series of contretemps embarrassed the official government in Tehran, including alleged Iranian support for terrorism, a ship carrying weapons to Gaza and, importantly, the clamorous disclosure of the Natanz and Arak nuclear facilities, things quickly headed south and forced Tehran to confront the reality that it might be next on the Pentagon’s crosshairs.

Feeling the heat, Khamenei gave the cue to then secretary of the Supreme National Security Council Hassan Rouhani to engage the EU3 (Britain, France, Germany) in the first major round of nuclear negotiations. According to the CIA’s 2007 National Intelligence Estimate, Iran had effectively put its nuclear weapons program on ice in the autumn of 2003. The run-up to Operation Iraqi Freedom that eventually decapitated Saddam’s Baathist regime offered another hit-and-run avenue for potential cooperation, pursued to the hilt, if reports of the “grand bargain” facsimile hand-delivered to the Bush administration through the Swiss ambassador are to be believed.

At the same time however, the U.S.’ position relative to Iran’s went on the decline as it struggled to make sense of, let alone impose a preferred peace on, the Afghan and Iraqi slaughterhouses. In 2005, the presidential elections in Iran saw the complete takeover by the neoconservatives and traditional conservatives of all that remained to be despoiled within elected officialdom, over and beyond the unelected bodies already being controlled by the traditional conservatives since 1989. This momentary unity of pan-conservative power arguably encouraged a strategic consistency and clarity of purpose, however fleeting. Skyrocketing oil prices and the palette of policy options it afforded magnified Iran’s braggadocio and in turn, the impression perceived by observers of an increasingly maximalist pursuit of ends, thickened by the grease of wanton rhetoric being leaked by the hardline neoconservative Ahmadinejad government.

Tehran went on the offensive in post-Saddam Iraq, helping midwife a Shia-majority state thanks to the quasi-democratic consensus the Americans had helped introduce in Iran’s western neighbor. Not only were they to distract and eventually disgorge US forces combating the rampant twin Sunni-Shia insurgency in Iraq, Iranian strategists were to also deter Washington’s military brass from invading the Iranian plateau at a time that it had elevated the country’s nuclear program to the ultimate symbol of Iranian independence, nationalism and pride. Even in the absence of an actual warhead, the dissembling ambiguity and pursuit of the other two elements of a nuclear weapons program—fuel enrichment (or separation, depending on the path chosen) and ballistic missile technology—created powerful leverage for Iran’s leaders over the international debate surrounding their country’s conduct.

Iran didn’t go all this alone. As the nuclear negotiations under Khatami’s watch fell apart with little to show for on the diplomatic front, the incoming Ahmadinejad government took Iran on a wide arc eastward, courting the three major powers Russia, India and especially energy-thirsty China, even as Tehran cozied up to a gaggle of third-rate, often leftist-populist and ultimately inconsequential governments in Latin America and Africa. On the whole, however, these overtures helped Tehran level the diplomatic playing field at least where the nuclear standoff, by now something of an unwanted cynosure, was concerned. Involvement and partial membership in the Shanghai Cooperation Organization, in addition, permitted Iran to finally set its external balancing strategy against the U.S. into a wider institutional context, with a potential security dimension short of a mutual defense clause. Little coincidence that this same region encompassed within the SCO largely corresponded with the “pivot area” for global control identified by the British geographer Halford Mackinder a century ago, from which “a series of horse-riding peoples emerged.”

The third inflection point then erupted with the Arab uprisings in 2011, which continue to roil the Middle East today. The initial sense of strategic opportunity quickly melted away as popular grassroots violence metastasized to Bashar al-Assad’s Syria, compelling Iran to intensify and expand the scope of its intervention if its regional influence was not to be eroded. The rise of the self-styled Islamic State, and more critically, its virulently anti-Shia consolidation in Syria, Iraq and the borders of Lebanon—all three key redoubts of influence for Iran’s regional strategy —prompted greater battlefield visibility on the part of the Revolutionary Guards’ Quds Force and its allied militias, along with the increasingly frequent repatriation of body bags for burial on Iranian soil.

The Islamic State’s ritual brutality did displace Iran into a relatively more moderate light, on the other hand, with added contrast from Saudi Arabia’s perceived nurturing of Sunni extremism against the Shia, and Turkey’s vexingly unfathomable prevarication with respect to the stanching of jihadi fighters flowing into Syria. The central challenge amid the ongoing transformation of the region, however, remained the strategic contention for power and influence vis-à-vis Saudi Arabia, the figurative firstborn among the region’s other Sunni powers.

At about this time, with Ahmadinejad’s nuclear rhetoric having reached something of a paroxysm, the states most concerned by a burgeoning Iranian nuclear arsenal, notably Israel and the US, effectively waged a non-hot war on Iran’s ability to acquire the bomb, bringing pressure to bear on the scientific-technological basis of its nuclear program and more broadly, on its oil and finance sectors through sanctions. With its economy and bedrock of any grand strategic pursuit at risk of terminal insolvency, Iran this time under former nuclear negotiator-turned-president Rouhani again banked hard towards negotiations. As it stands, Iran has so far secured recognition and legitimization of its controversial nuclear program and sealed its status as a nuclear threshold state. Not only that, it has temporarily traded in maximal deterrence—if that is indeed the eventual point behind the nuclear program—in order to avert the thickening specter of war, economic collapse and the further erosion of regime legitimacy. Indeed, the signing of the JCPOA (Joint Comprehensive Plan of Action) likewise blunts the threats of an Israeli strike, given the cost such an action would incur following international legitimation of Iran’s nuclear program.