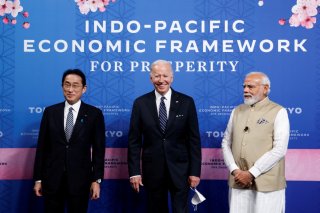 The U.S. government can also facilitate greater bilateral trade relations without a legally binding trade agreement. It can sign memoranda of economic cooperation with other governments that simply note their country’s intention to observe international law and to inform the United States of major business opportunities for its private sector. The United States has signed such agreements with nations like Kenya, Ghana, and Albania.

Another promising partnership path is to form flexible and varied economic coalitions of the willing. To be effective, these partnerships don’t have to be universal in their membership and purpose like the UN. They may actually be more effective precisely because they are smaller and more focused.

One model is the recently signed Indo-Pacific Economic Framework for Prosperity (IPEF) which brings together twelve countries representing 40 percent of world GDP. No U.S. aid or preferential trade access to the U.S. market is involved. Instead, the joint agreement stipulates fair rules for the digital economy, business standards (including, importantly, anti-corruption), resilient supply chains, decarbonization, etc. Its contribution is that it creates a positive economic environment for all participants and a framework to explore more areas of common interest.

Another avenue is the formation of partnerships between free-world countries to pool resources for joint ventures. It has become clear over the past few decades that, when companies from the United States or from other democracies compete with Chinese companies, they are actually competing against the resources of the Chinese government, which controls all resources in China. It is also clear that Chinese companies often do business in violation of international law and practices. Under these circumstances, the Chinese Communist Party wins, but all others lose.

One example of pooled resources was outlined in the June 2021 communique of the Group of Seven meeting in Cornwall, England. The G-7 leaders agreed on a new initiative to jointly support global infrastructure investment in developing countries by catalyzing private capital in developed countries. These investments would keep the highest business and construction standards.

In a specialized field, a think tank proposal in 2020 called “Common Code: An Alliance Framework for Democratic Technology Policy” proposes a technology alliance comprised initially of about a dozen democracies. It seeks to secure and diversify supply chains, protect critical technologies, and reclaim the integrity of international standards-setting. It will also pool resources to create a multinational investment mechanism for digital infrastructure and increased research and development. Importantly, it would counter disinformation and other illiberal uses of technology as well.

Some alliances can be even more focused, like the Clean Network Initiative promoted by State Department undersecretary Keith Krach in 2020 to prevent Huawei from building telecom networks outside China. Under Chinese law, Huawei must share all its data with Chinese intelligence agencies. This represents a long-term threat to data privacy, security, human rights, and principled collaboration in the free world. By the end of 2020, the Clean Network comprised over sixty nations, representing more than two-thirds of the world's gross domestic product, and 200 telecom companies.

Why This Will Work

America’s partners are looking for an alternative to the Chinese, Russian, and Iranian models. They do not want to live in a world dominated by these three. They trust us and know that, in the end, the United States is the better bet to win the great power competition.

The partnership approach to international economic relations has domestic political support in the United States. It is effective and, as proposed here, highly flexible, offering many ways in which partnerships can grow, strengthen, and prosper.

Dan Negrea is the senior director of the Atlantic Council’s Freedom and Prosperity Center. He served at the U.S. Department of State in leadership positions in the Policy Planning Office and the Economic Bureau.

Max Primorac is director of the Douglas and Sarah Allison Center for Foreign Policy at The Heritage Foundation. He served in leadership positions at the United States Agency for International Development.

Anthony B. Kim is a Heritage Foundation research fellow, editor of its annual Index of Economic Freedom and manager of its Global Engagement program.