A Partnership That Can Stop China in the South China Sea 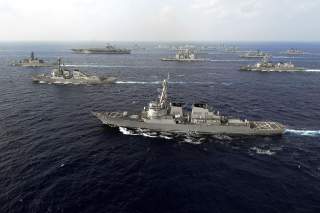 The quadrilateral dialogue needs to effectively harness the talents of the best and brightest in academia, think tanks and governments to mitigate mistrust and build confidence among regional nations as well as foster the development and implementation of innovative policies. Carefully cultivated relationships among Track 1.5 and Track 2 actors—of particular importance if national leaders initially find it too sensitive to begin with direct government-to-government talks—can positively and constructively influence a subsequent Track 1 dialogue. Such methods thereby enhance the effectiveness and efficiency of strategic engagements as well as develop innovative and alternative solutions to solving regional problems.

The quadrilateral dialogue will also help identify areas where Philippine, Japanese, South Korean and Taiwanese national interests and policies converge as well as diverge. It is critical for all parties to come in good faith to a multilateral negotiating table, in the hope that they can enhance mutual understanding, create a constructive environment to discuss and resolve differences, and consequently expand as well as deepen ties. With regard to addressing challenges in the ECS and SCS, the four sides should work toward developing shared resources as well as building an enduring framework for peace, stability and compliance to international norms. The ultimate goal is to resolve competing maritime sovereignty claims in an atmosphere that promotes mutual respect and eschews militarization.

The four sides should hold formal biannual meetings. One country shall hold the position of chair each year, while the other three act as hosts. Ideally, working-level committees should        communicate or meet far more frequently to build consensus, negotiate upon and deconflict proposed agenda items, draft working papers, maintain momentum, monitor progress, and push for the timely and effective implementation of agreements. These committees should include a diverse set of academics, government officials and policy experts with expertise in issues such as maritime and international law as well as environmental science.

Rather than focusing on sovereignty disputes at the onset, the dialogue should initially work on structural goals such as formulating a charter, a memorandum of understanding, and the establishment of a joint cooperation and development agreement. The 2013 Taipei-Tokyo civil fisheries agreement may serve as an appropriate model or starting point. Participants could also use the forum to establish crisis hotlines, develop common rules of conduct at sea and in the air, build humanitarian assistance/disaster relief capabilities and capacities, or conduct joint research on climate change, for example. The dialogue could even expand over time to discuss other areas of common interest, including cyberspace and space cooperation. The parties should furthermore consider the implementation of a credible and reliable crisis-management (escalation control) protocol to manage the increasing contacts between military aircraft and military as well as civilian ships.

Manila, Seoul, Taipei and Tokyo may eventually wish to consider inviting observers to the quadrilateral dialogue, but should agree on third-party attendees by unanimous decision. Potential observers are other regional claimants or Washington, which is a close partner or treaty ally of all four participants. It behooves the United States to find ways to play a crucial supporting role in this new initiative. The complexity of America’s Asia-Pacific agenda makes it critical for its partners and allies to work together as seamlessly as possible. Needless misunderstandings and friction only benefit strategic competitors.

The United States must continue to reassure regional allies and partners that it will remain committed to the peaceful resolution of disputes through diplomatic means. Whether engagement occurs under the auspices of the “Asian rebalance” or “principled security network,” U.S. partners and allies need to know that Washington—the region’s net provider of maritime security—will respond to unreasonable and provocative behaviors in the ECS, which threaten the safety and security of all. Yet, at the same time, as tensions in the region remain high, it is not always prudent for Washington to pursue a path of direct involvement.

If the quadrilateral ECS and SCS dialogue successfully builds mutual trust, enhances cooperation and manages regional tensions over time, then regional stakeholders may wish to consider expanding or replicating it to include other claimants or problem sets.

Japan, South Korea, Taiwan and the Philippines have a historic opportunity to enhance peace and stability in and around the ECS and SCS. Establishing a Quadrilateral Track 1 Dialogue will facilitate mutual understanding of regional challenges as well as greater cooperation and collaboration; build more mutual trust and consensus; and develop an enduring forum and mechanism for strategic dialogue to manage tensions and maintain peace. Failing to work together effectively will have untold consequences, but the potential political, economic, security and environmental benefits of deeper cooperation are myriad.

Julia M. Famularo is a research affiliate at the Project 2049 Institute.